I saw this DIY piece of art on Bower Power and thought, now that’s a DIY project I could do! 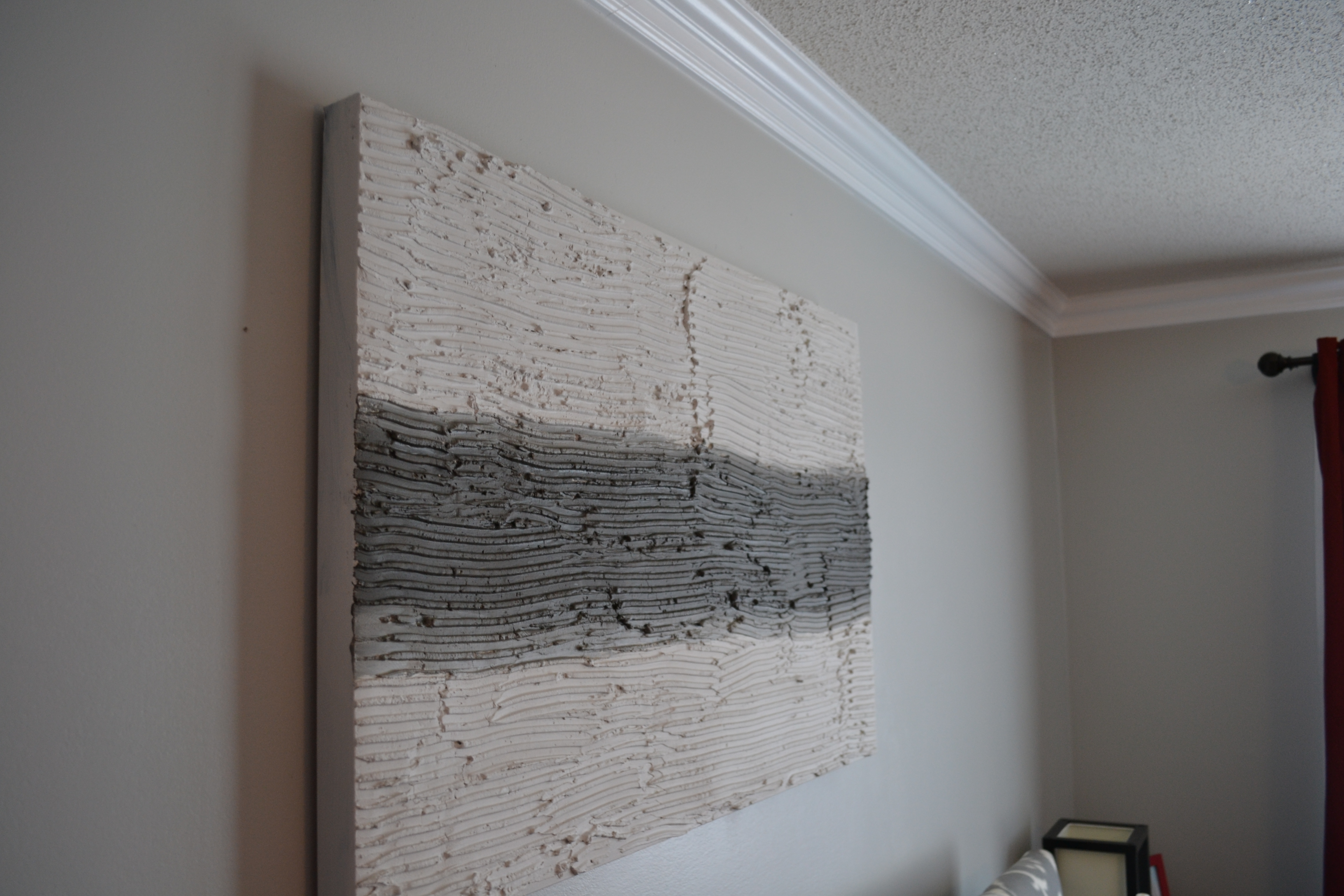 I used an old picture we had on our mantle in our MPLS house. I was over it and Nolan never really liked to begin with. I bought it at Kohl’s while he was off gallivanting at the DFL Convention up in Duluth several years ago. I was not so civic and got my nails done and shopped instead. 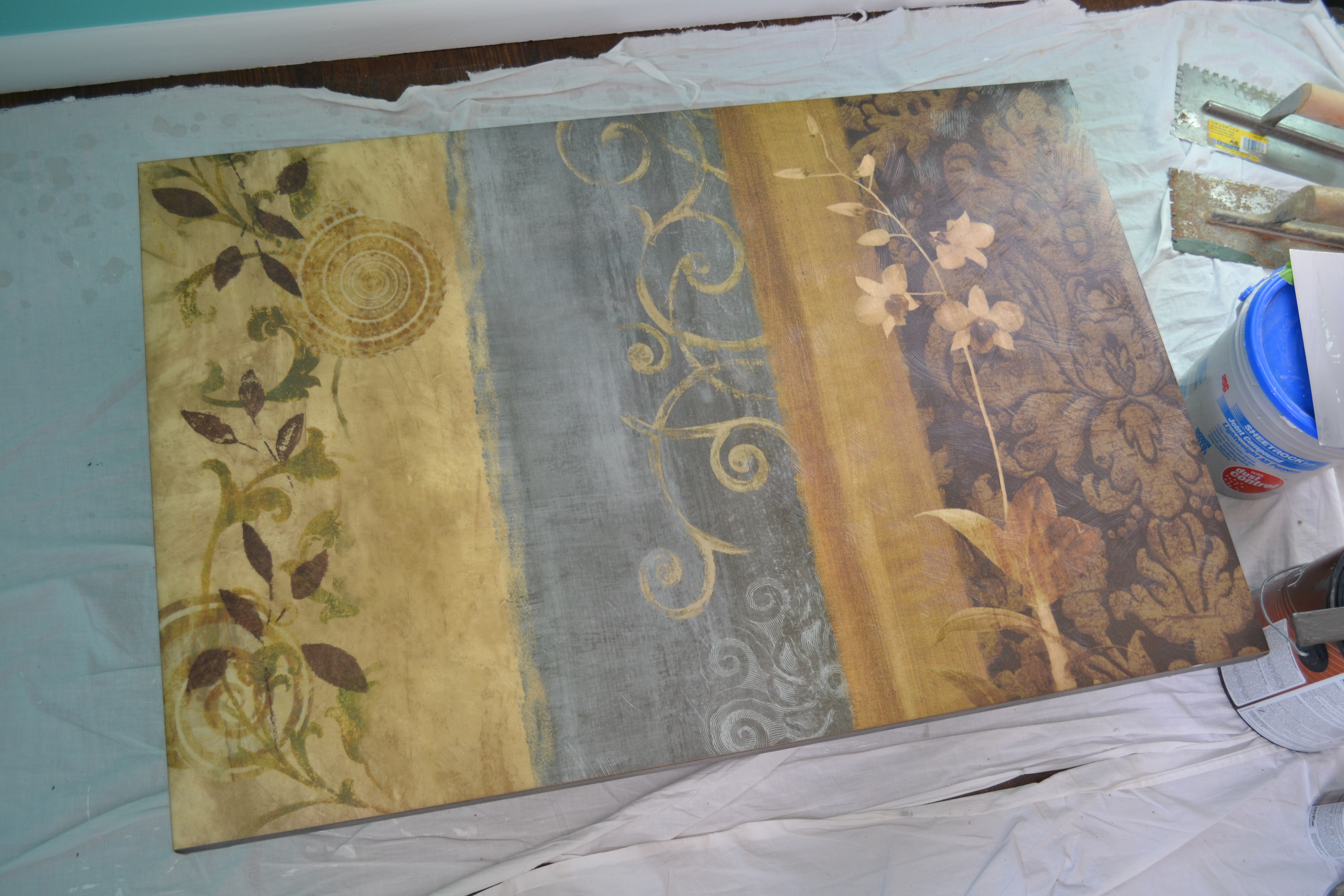 As directed, I used all-purpose compound  with a trowel. Nolan found a couple of them in the garage but I stuck with the pattern as seen on Bower Power. 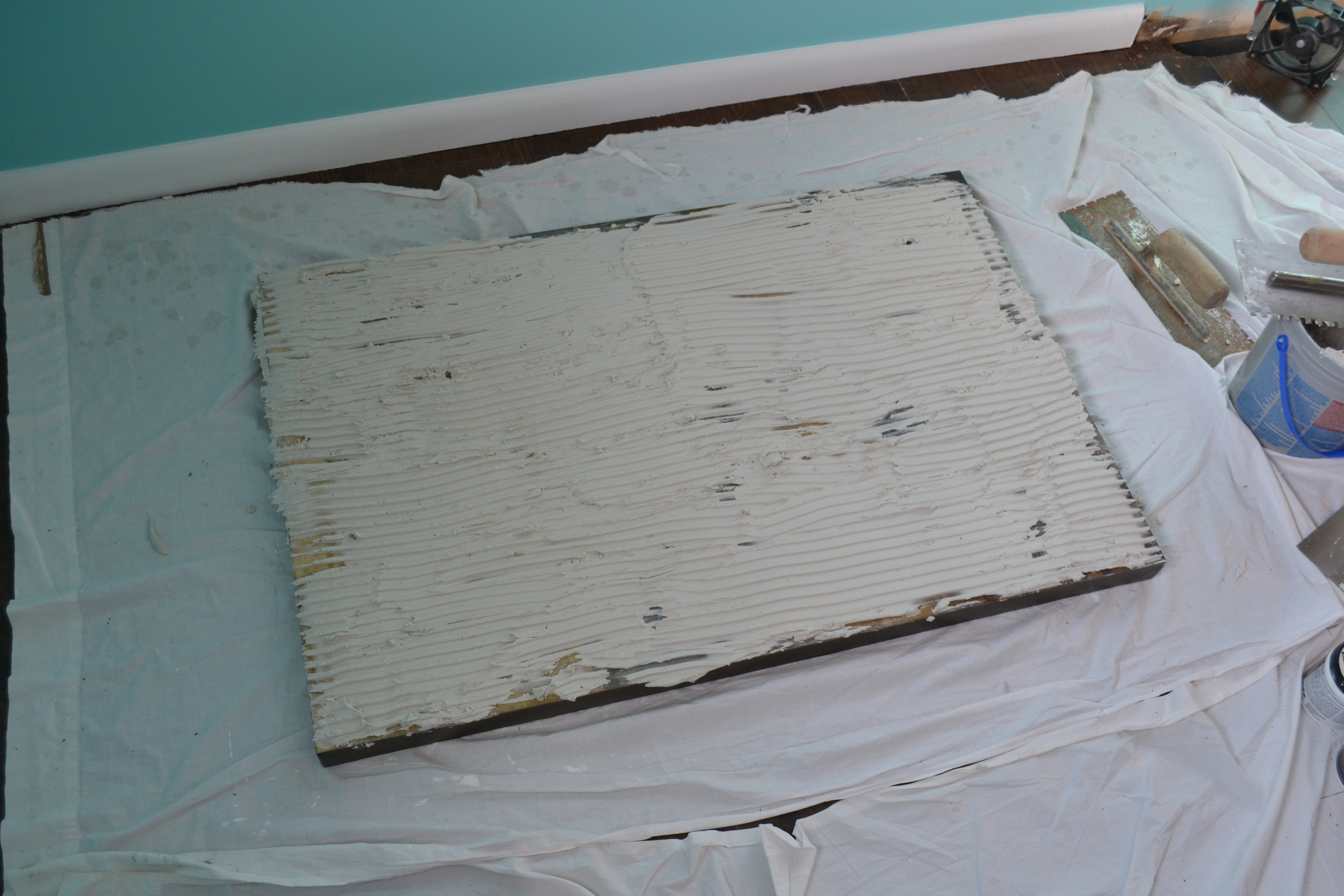 I lathered it on good! I was a bit afraid the thing would weigh a ton but there was no looking back! 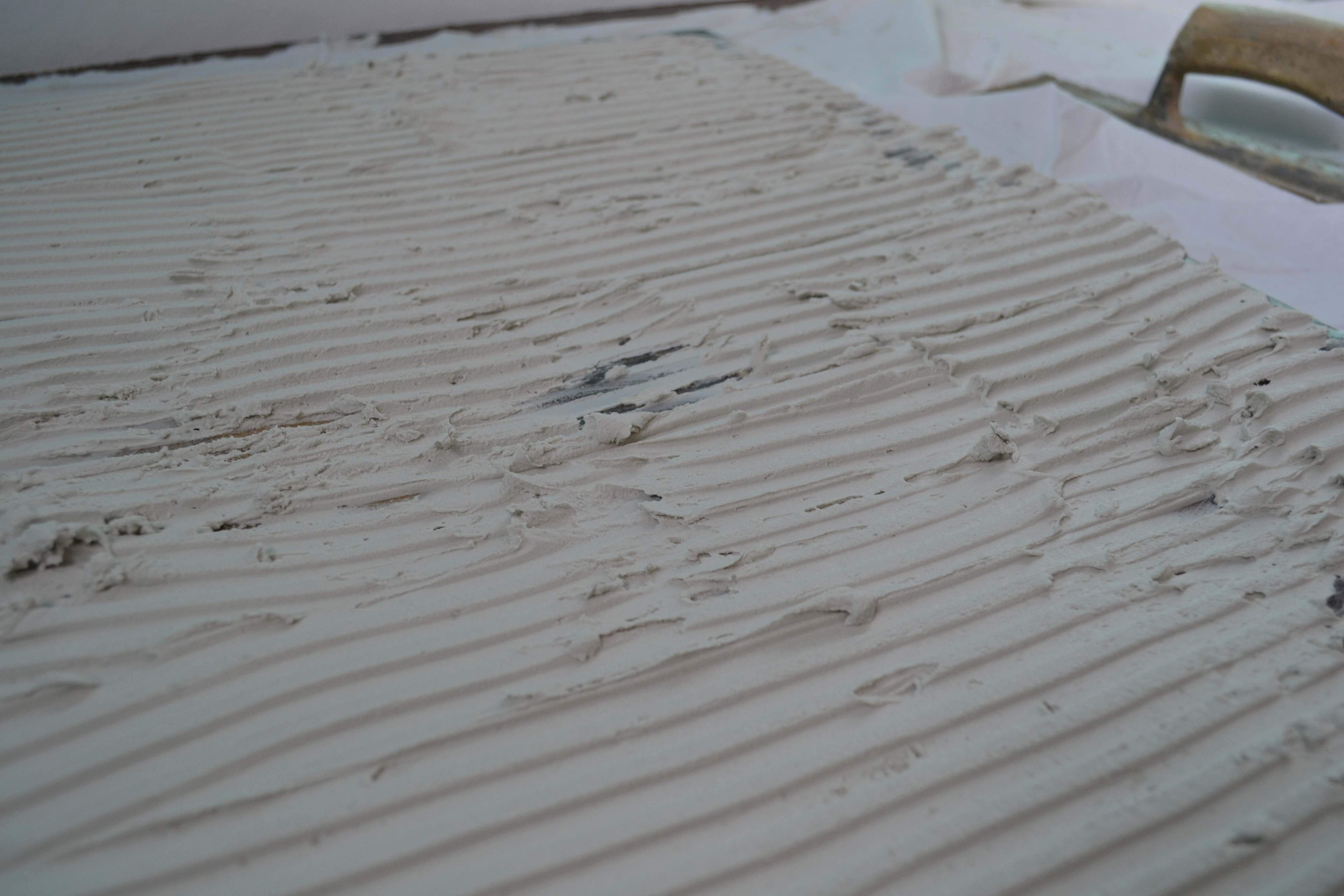 I liked this because it’s not suppose to look perfect so I could just go with the flow. Flow right off the edge if you want… 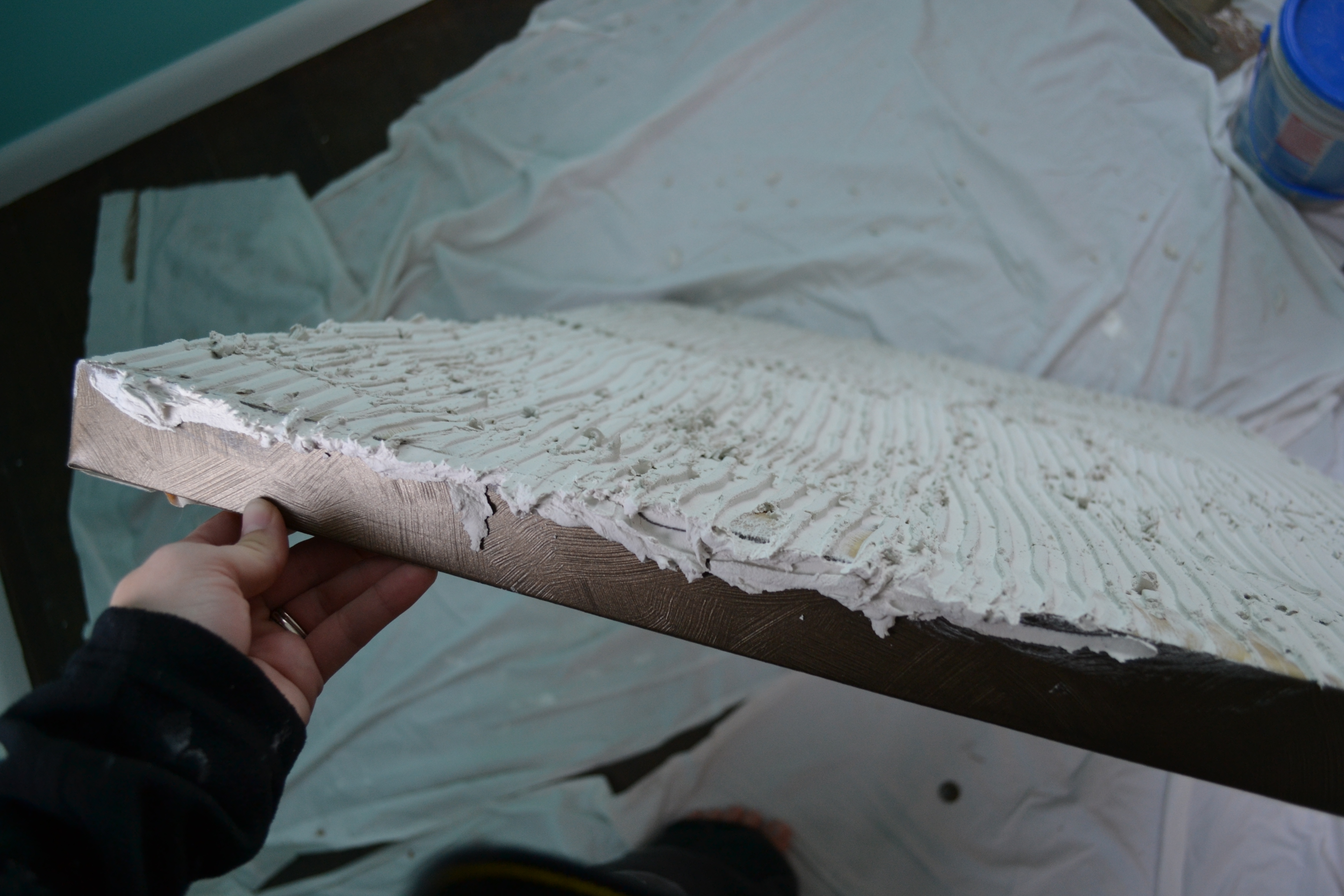 I let it dry overnight. I then sanded all the sides and grabbed some paint. 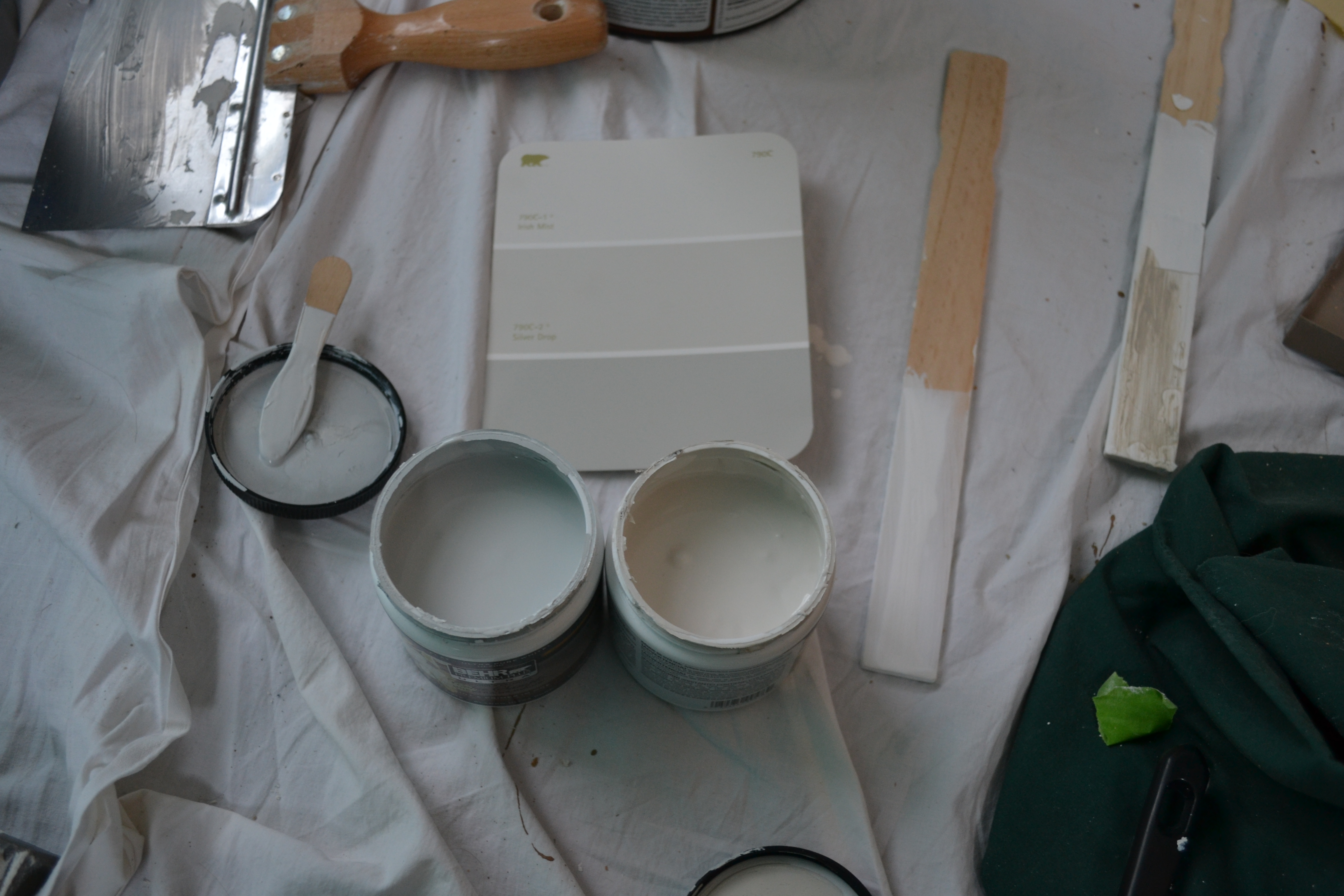 I used two colors. One was a leftover paint sample (Behr Silver Drop) I had from when we picked our master bedroom color (above right) and the second color was urbane bronze that our basement painters left behind when I chickened out.

I first applied the lighter color on the top and bottom of the canvas and while that was wet I went back to the center with the urbane bronze to sort of ‘melt’ the colors together. 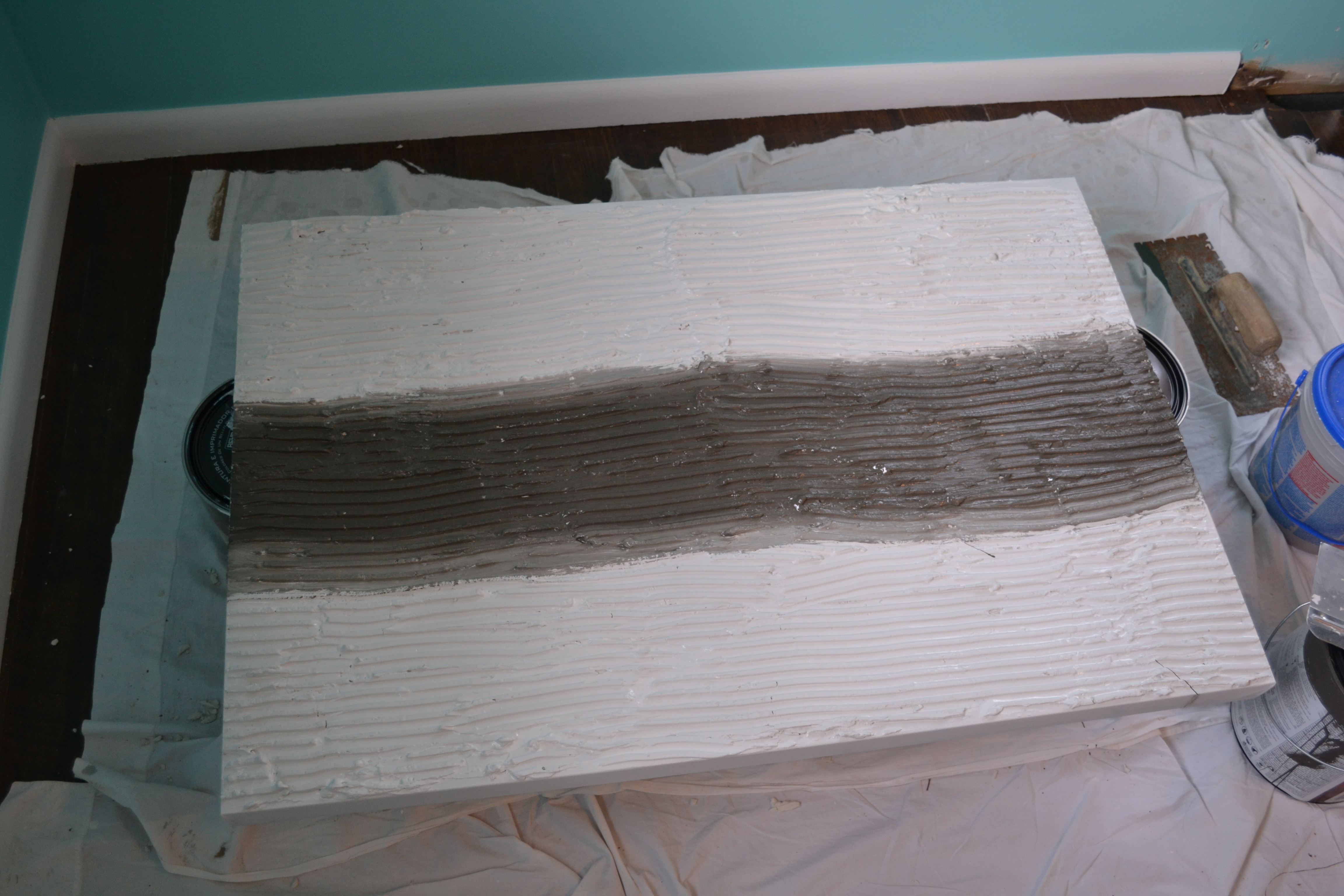 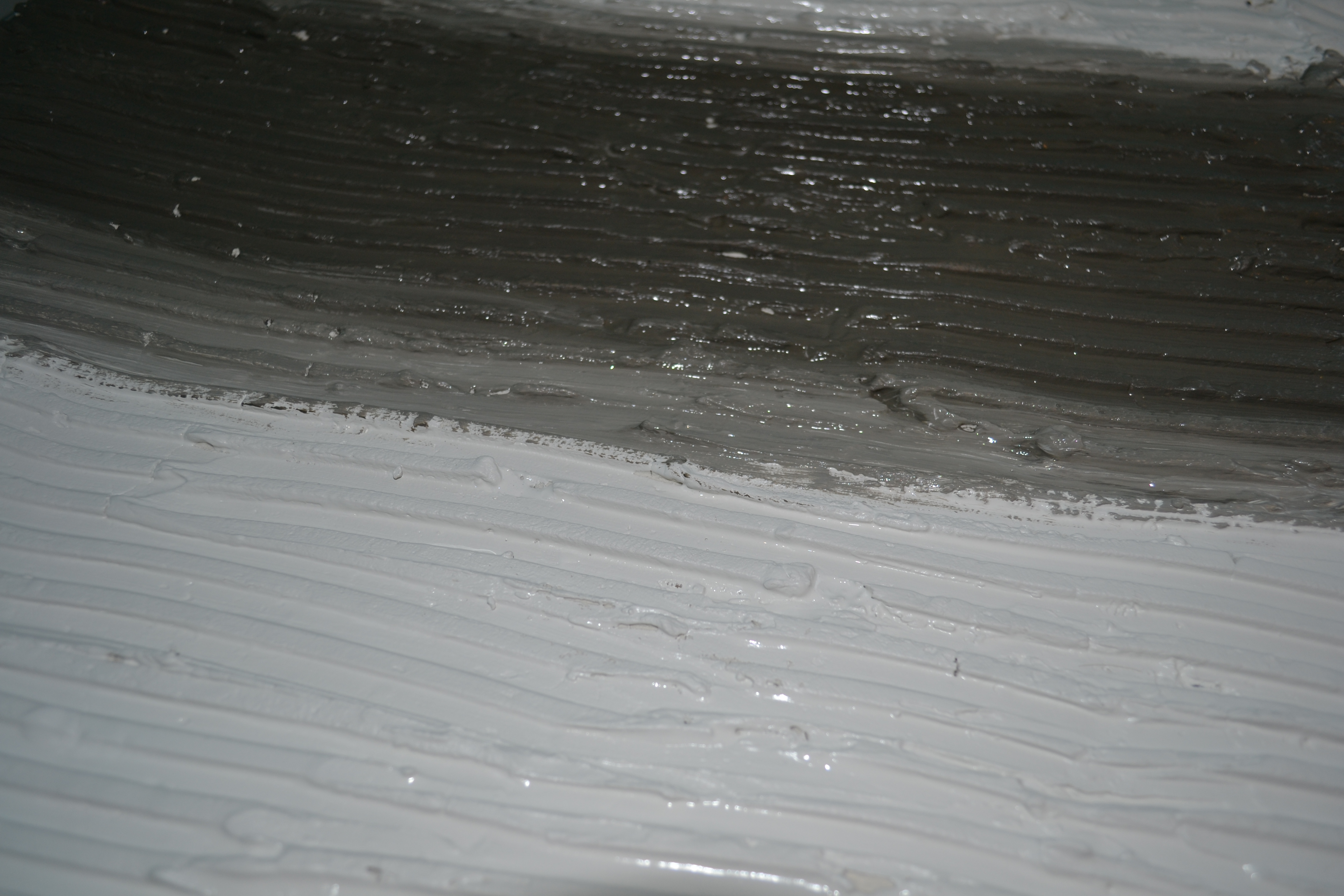 I also painted the sides silver drop. We ended up going darker for our bedroom because it was such a light gray, even here it looks almost white! 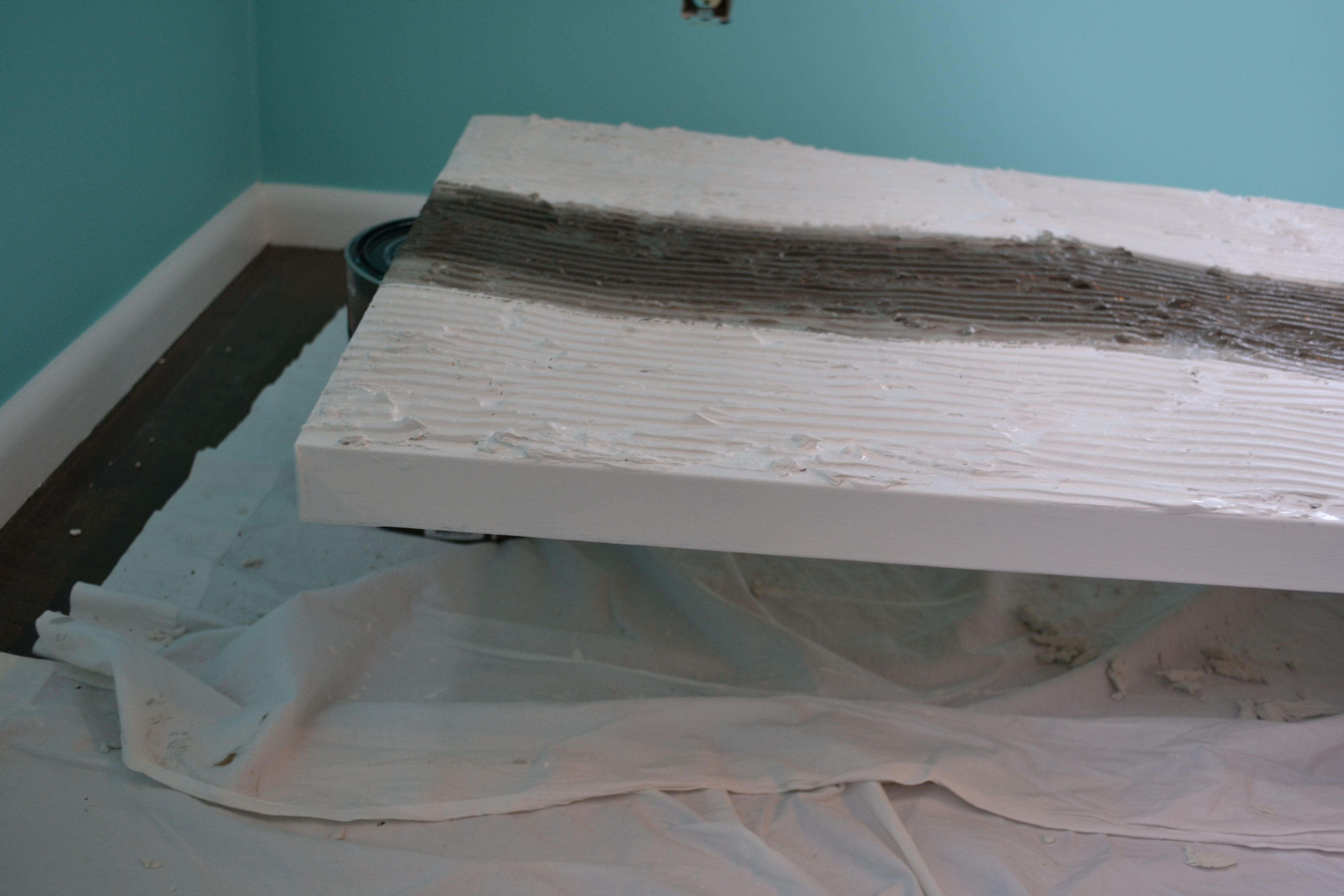 I decided to put it above our bed, but man, king size beds are HUGE. I think it looks too small and the colors are iffy. Again, don’t mind the fan string. I have a new light it’s just not installed yet. 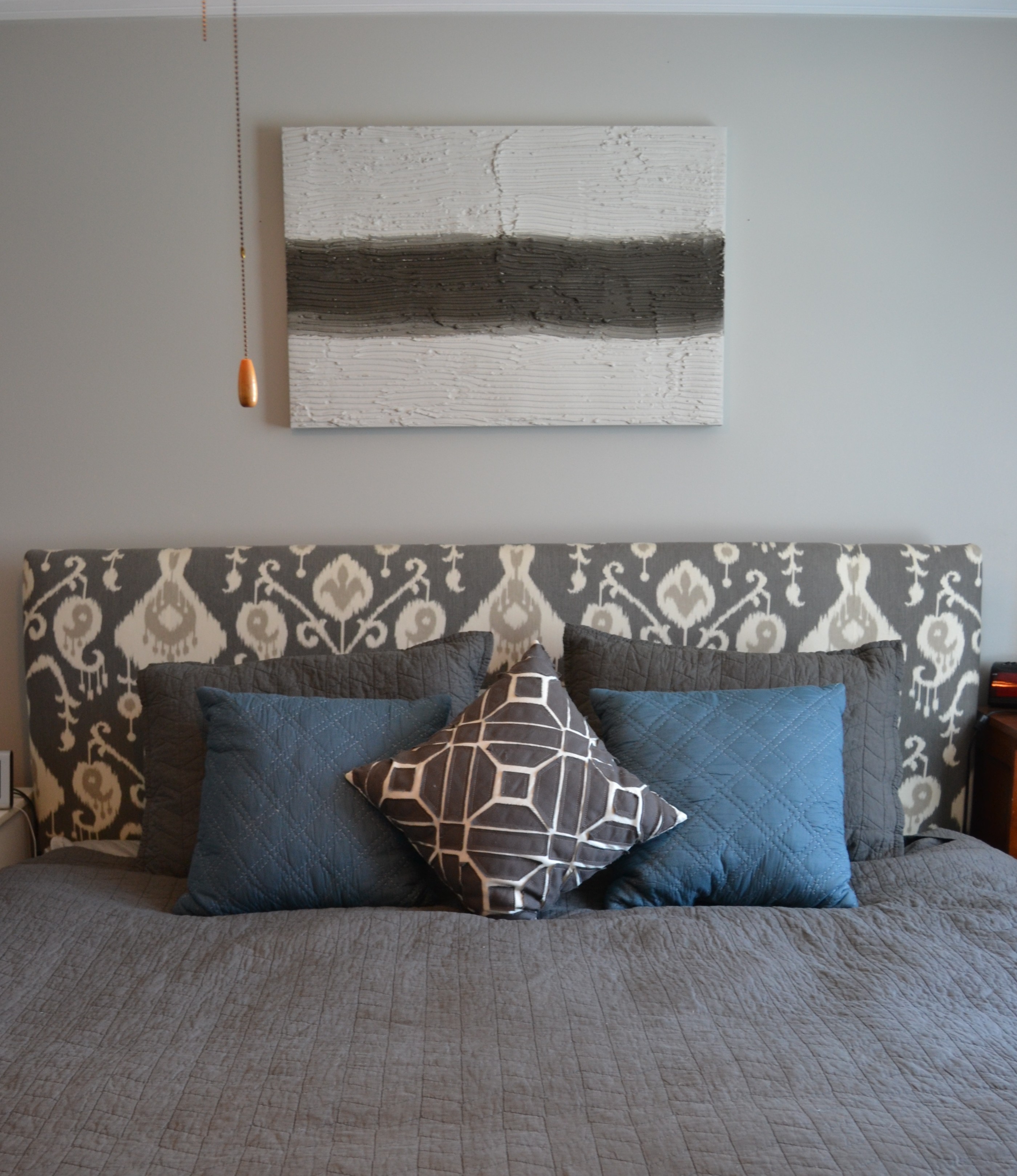 I love how it turned out, but I’m just not convinced this is the right spot for it. Previously we had the ‘where-we-met, where-we-got-married and where-we-live’ map pictures above the bed. Which one looks better? The headboard isn’t super tall but with the pattern maybe I should skip trying to decorate above it and stick with something small over the nightstands? I like the last picture on Tidbits & Twine article about when to decorate above the bed. (FWIW: Nolan’s vote is for the texture art.) 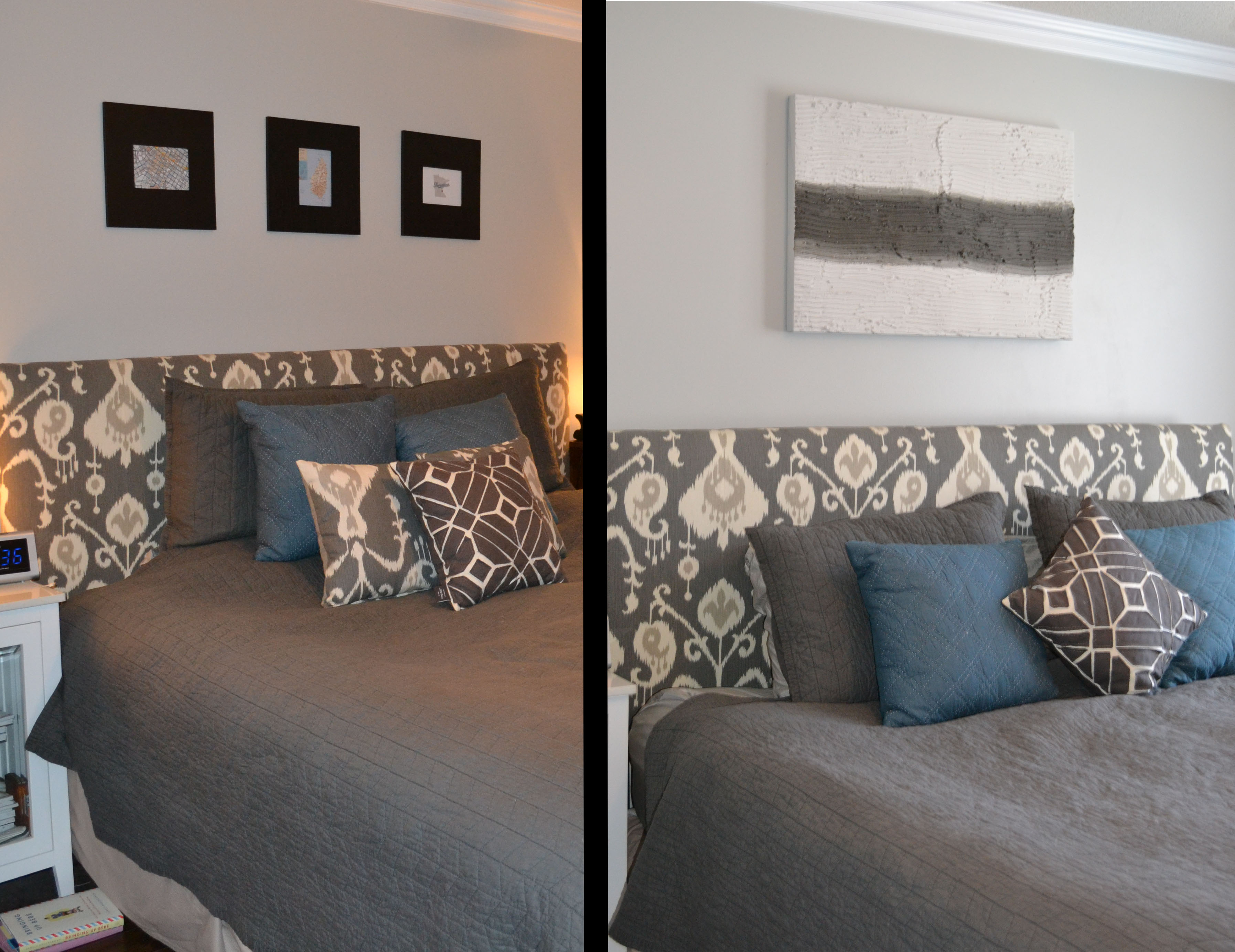 We randomly found pillows at Dock 86 that match the fabric on our headboard. I snatched them up, not knowing what to do with them. It’s too much to have them on the bed though. I’m thinking of creating a little bench for the spot below and putting them on it. I think the space is big enough for a small bench and we could use another wood accent in our bedroom. 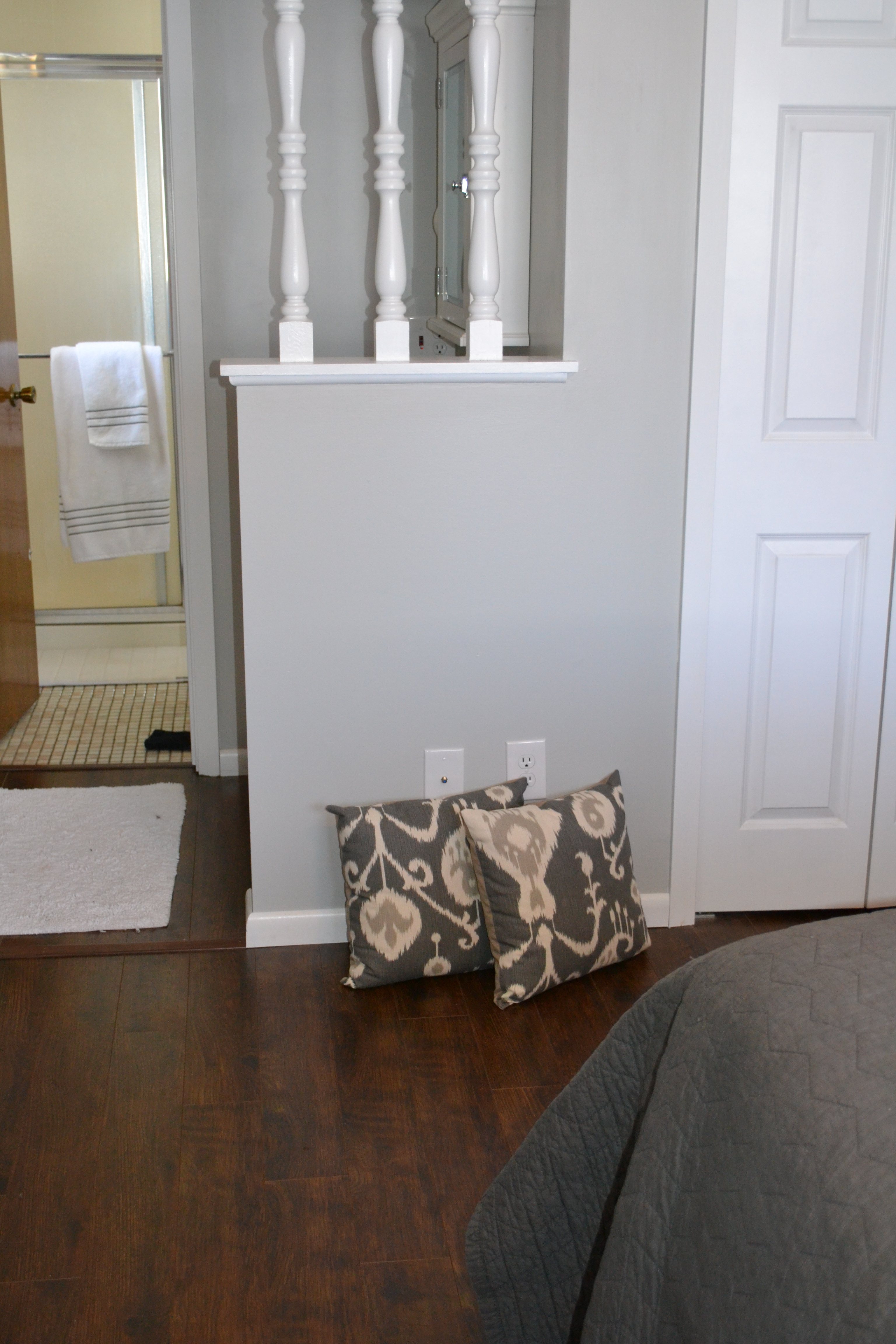