We’ve attained the trifecta over at Casa de Pitlick; carpet, countertop and beer! Sounds silly but those were three big things to check off our to-do list for the basement. 🙂 Even Sophie likes the carpet… (Sorry for the blurry photo.) 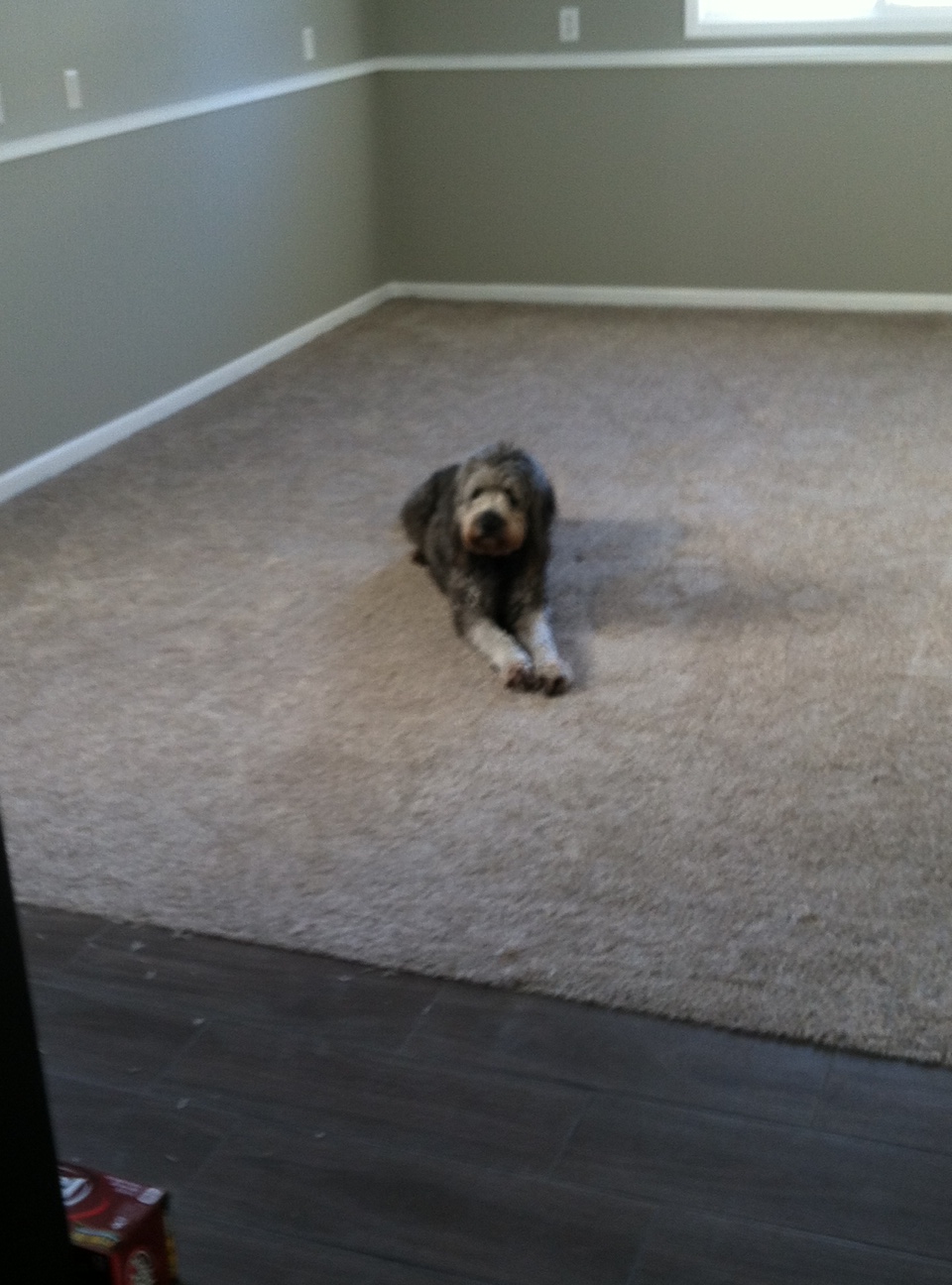 So far we’ve only had one “spill” on the carpet. The spring thaw last week left Sophie with some muddy paws after a walk with my father-in-law. When I got home and witnessed the horror (I exaggerate), I quickly checked Mohawk’s web site. I found instructions here about how to clean mud and dirt spots. And it worked like a charm! Nolan couldn’t even figure out where it was. And I’ve totally forgiven my FIL, it doesn’t hurt that he made my great-grandma’s molasses sugar cookies and gave us a few dozen. And honestly, they are about 95% identical; the only thing different is that she made them bigger.

The countertop wasn’t as straight forward, we did go with Home Depot as I mentioned before. After we ordered it, we got a call telling us when another person would call us to come measure. That person called when the first person said they would and set a date two weeks out to come measure. At the time it looked like this: 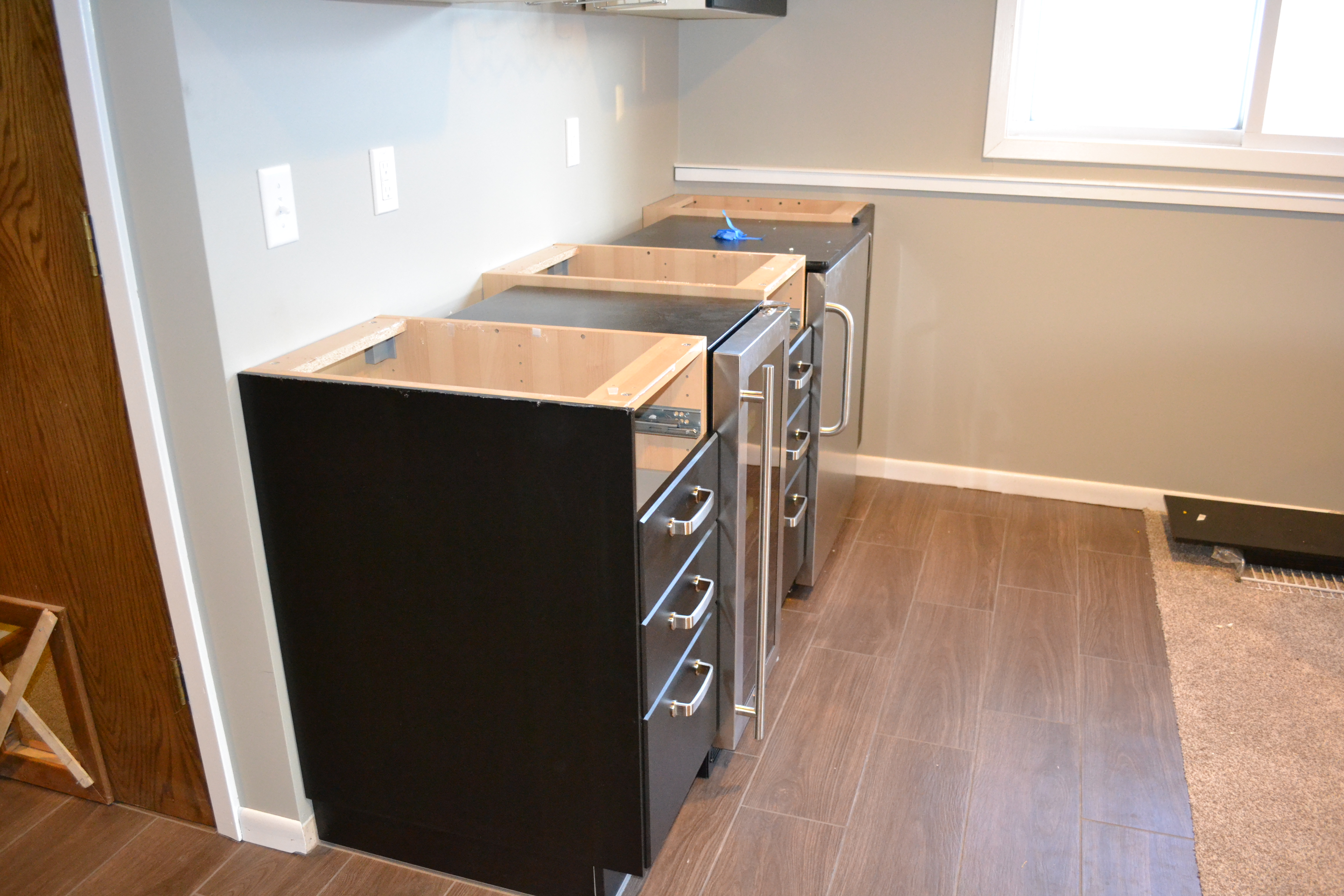 The measure person came out, measured and took the tap to make sure the screw holes were drilled properly and in the right place. You can guess where this is going. The installers showed up 4 hours late (PTO down the drain) and remembered to bring the tap back but the granite had no screw holes. So I made them lug it back up the stairs and back into their truck so they could bring it back to the shop to drill the holes. Which they did in about a day and installed it, again, a day or so after that. And now it looks like this: 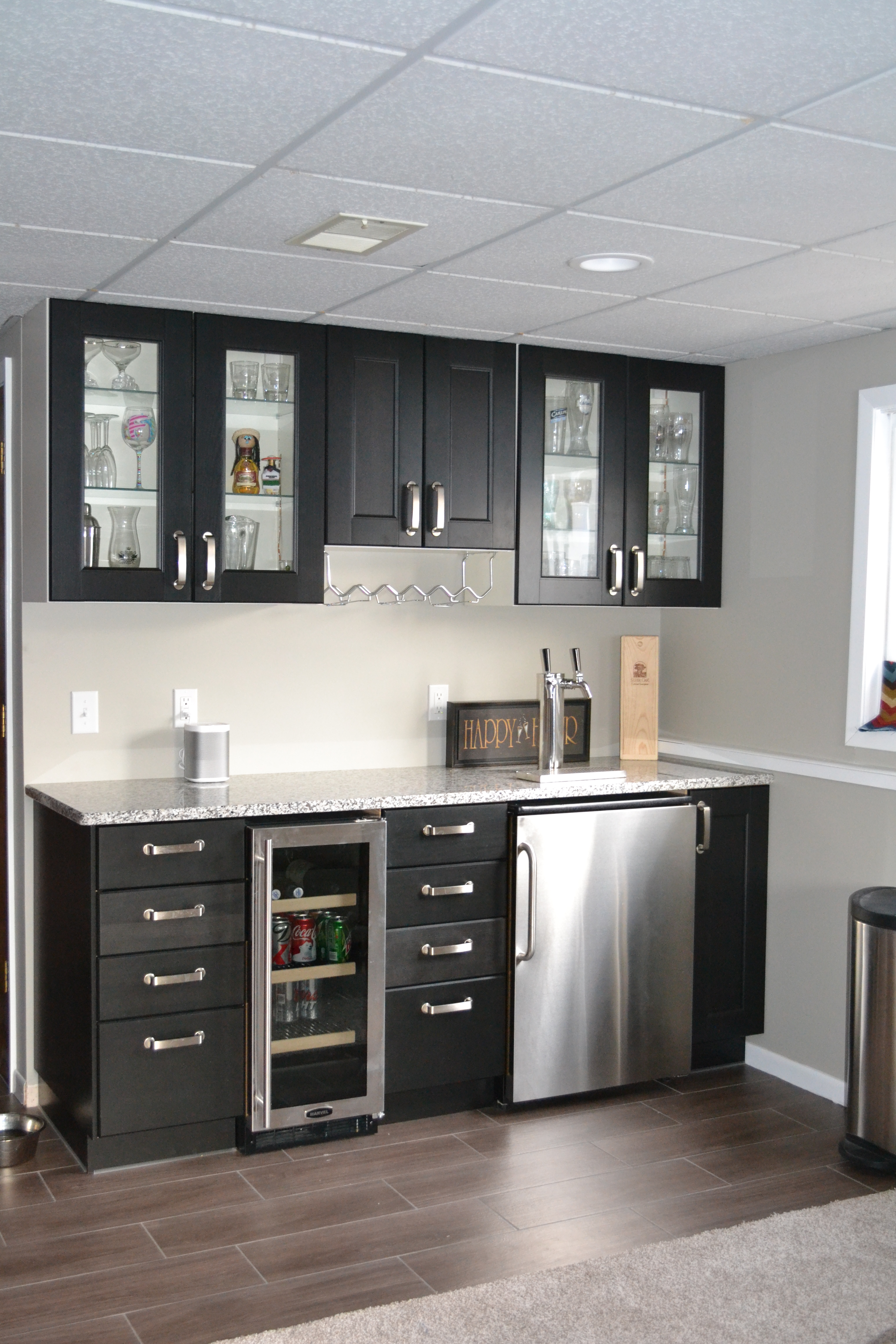 The only thing I would have done differently is have the overhang a bit bigger, you can see the kegerator sticks out just a little. Obvi we’ve still got some work, like a back splash, loading the wine rack and general styling. Speaking of which, I’m seriously trying to get some valances made. Upon going to Joann last week with Nolan, we came home with these three fabric samples: 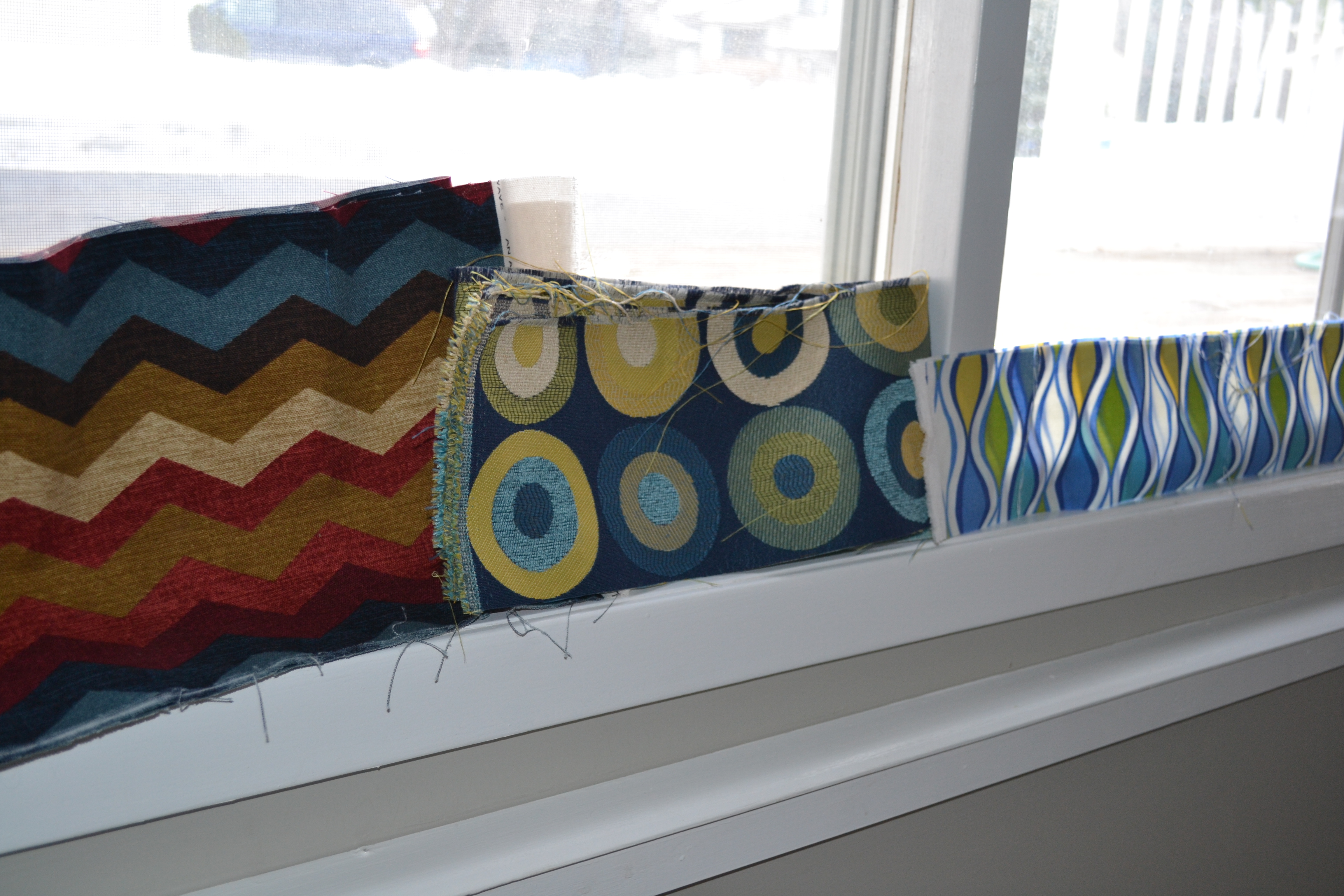 When he heard I was thinking blue, he picked out the middle and far right fabric. We didn’t agree at all and I pretty much hate those two, they remind me of a little boy’s nursery, not a basement that has a tap. And speaking of the tap, we got it all hooked up and pouring this weekend! 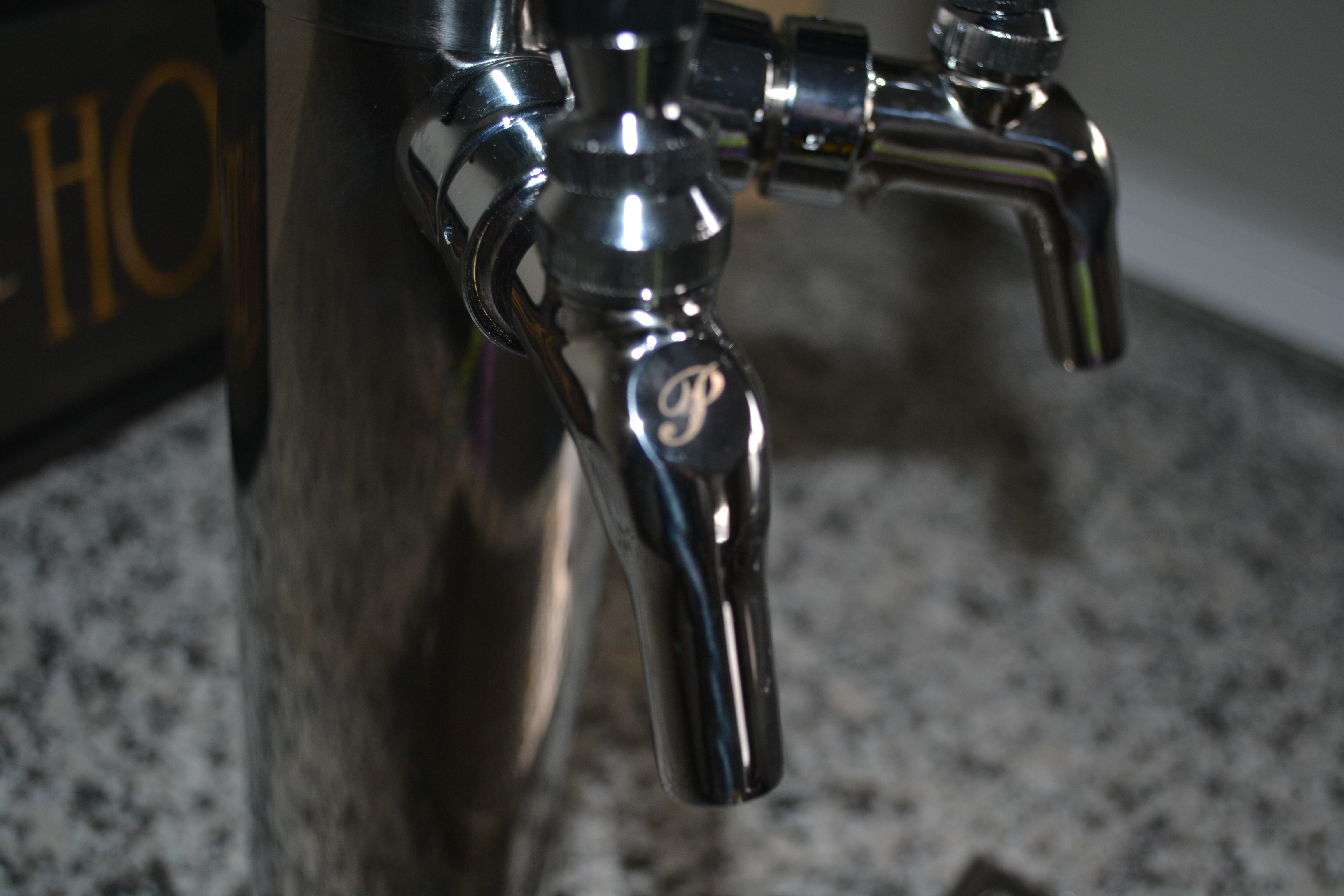 The style of the tap is Perlick, so how appropriate for Casa de Pitlick?

And look at those lovely screw holes!! Besides the minor headache with the granite, I’m really happy with it. 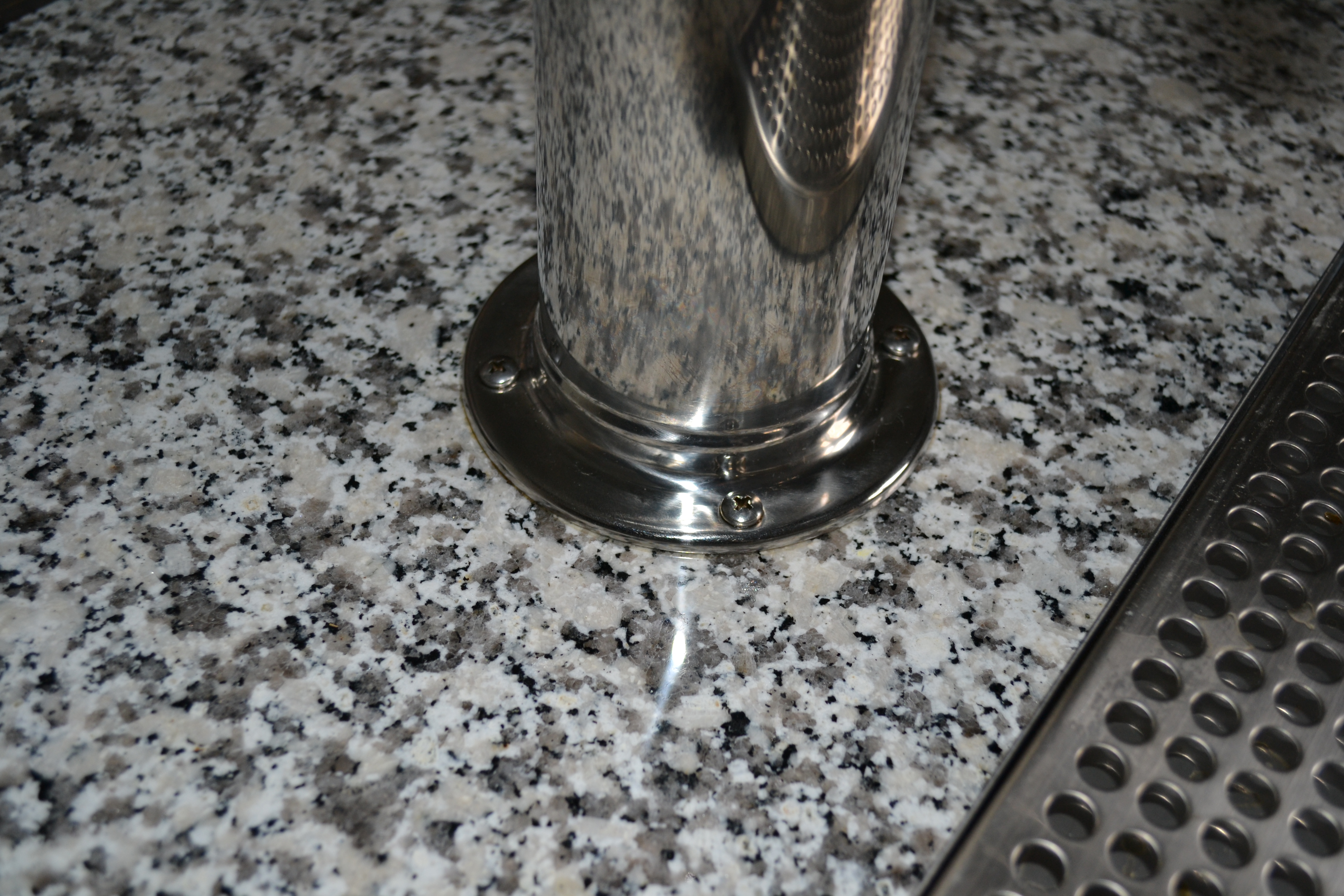 We got two sixth barrels. Yes, sixth barrels, that’s apparently what you call a barrel that is 23 3/8″ by 9 1/4″. We went to The Four Firkins in St. Louis Park, they’ve got a huge selection, check it out here. The place was crawling with hipsters, ish. Here is Nolan putting it together. We read/heard that the beer sometimes splashes out a bit so we took precaution with some Sophie towels. 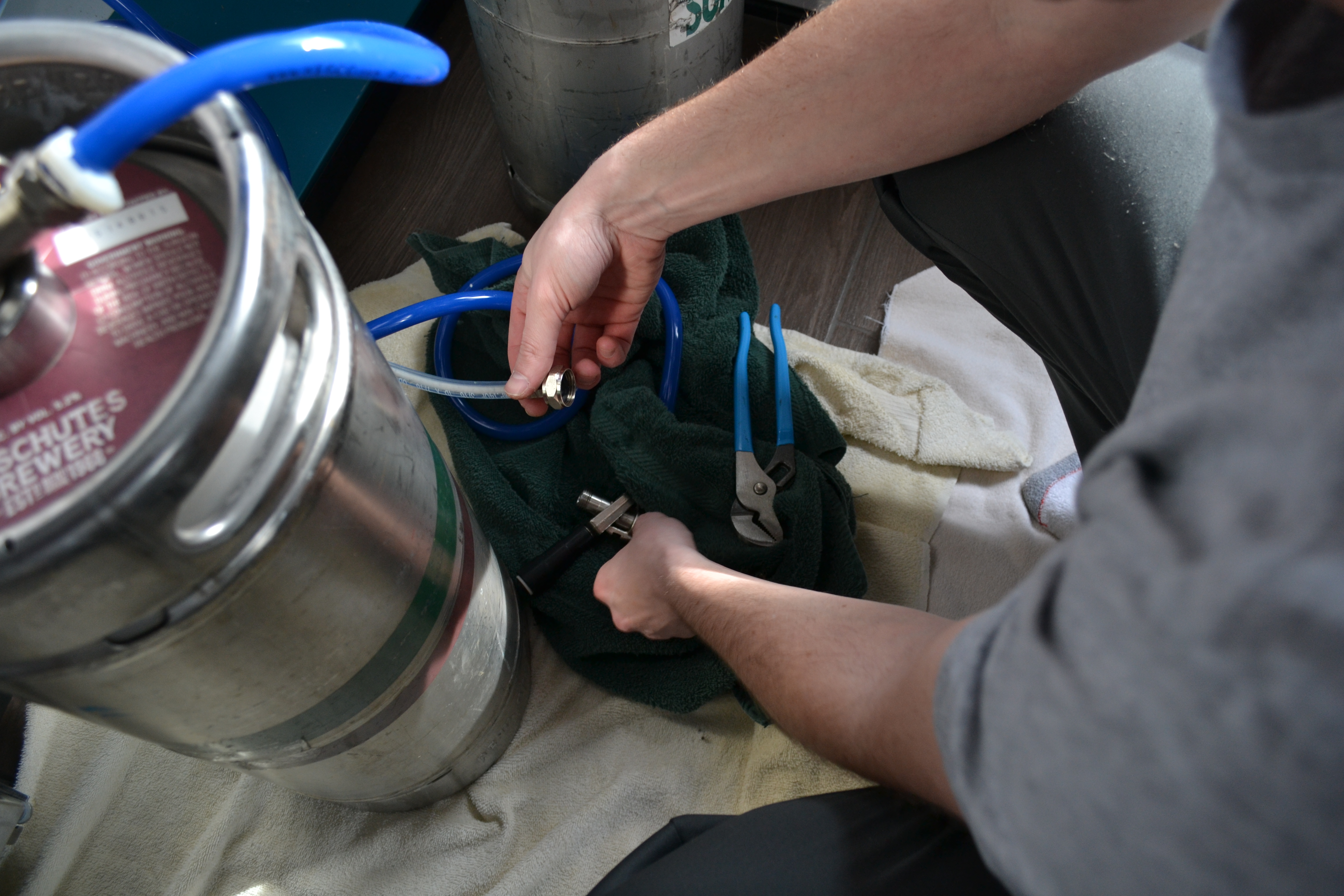 After doing it once I think subsequent kegs will be really simple to hook up.  I like that Nolan is on his tip-toes in this picture, he is SO excited. 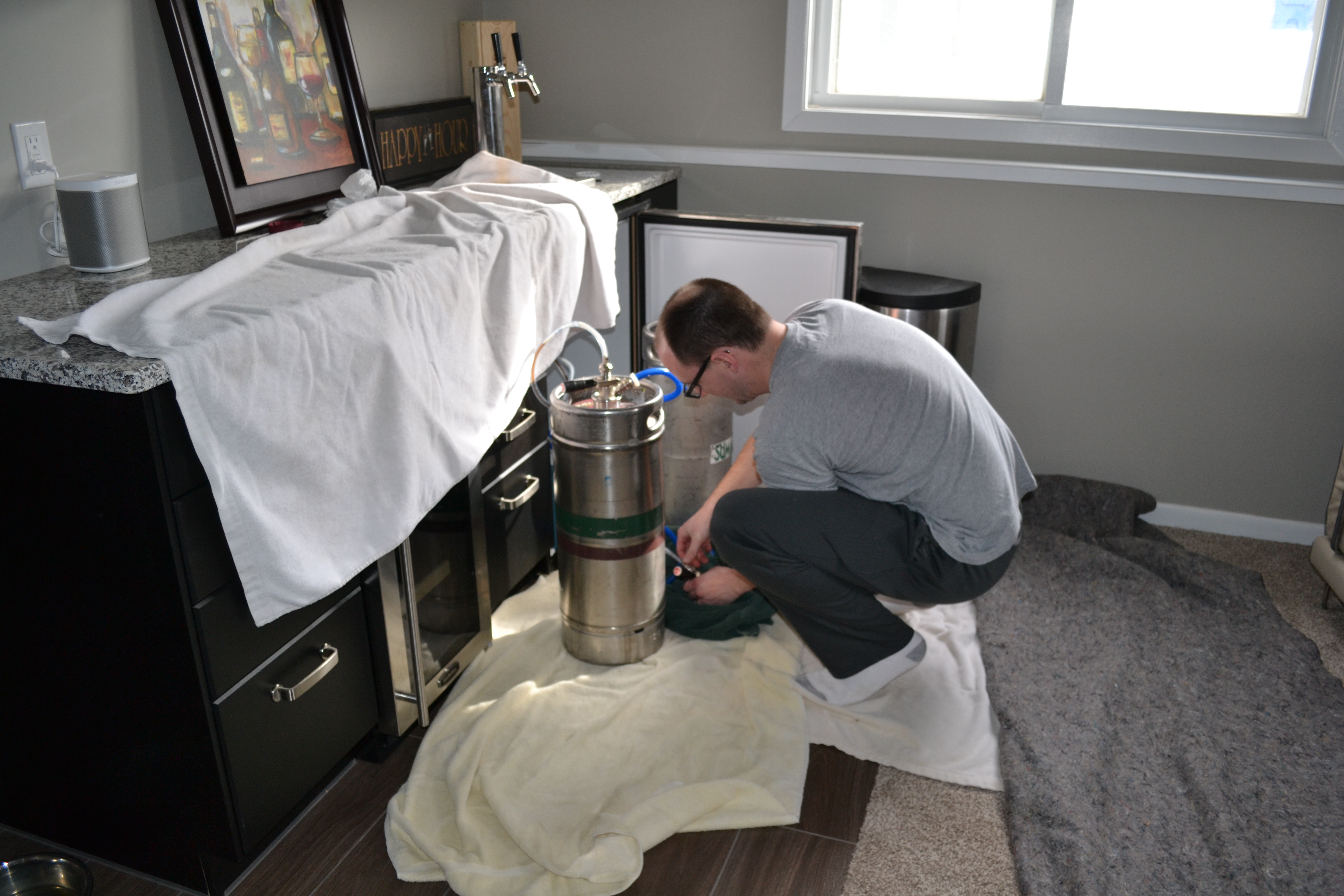 Gotta get the pressure just right, there are a lot of mechanics around getting this thing to work right, check out the instructions here. Not that you need them but I know where I can quick look them up again, if needed. 🙂 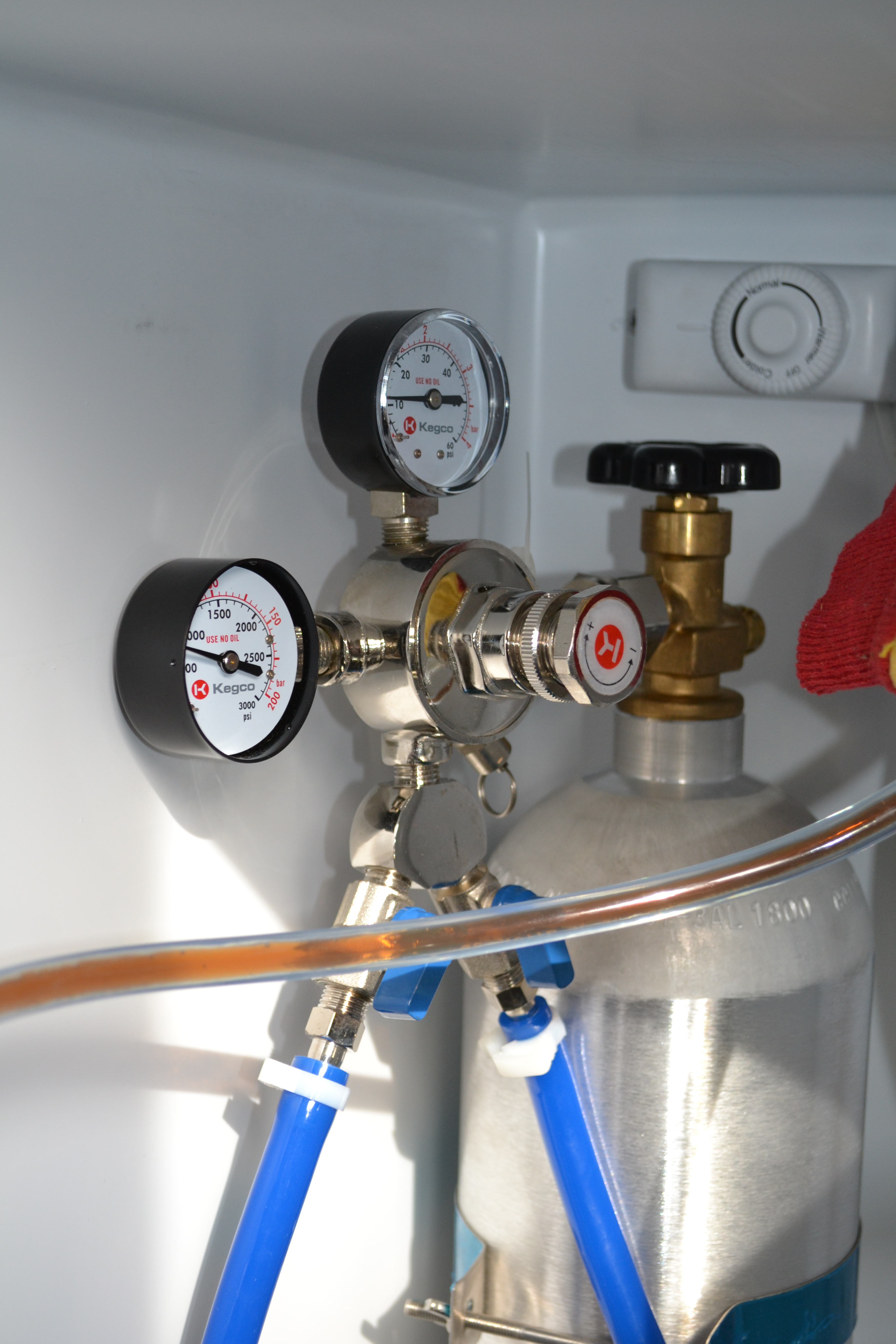 We had a couple over spills. NOTE: don’t over-tighten the faucet knob. 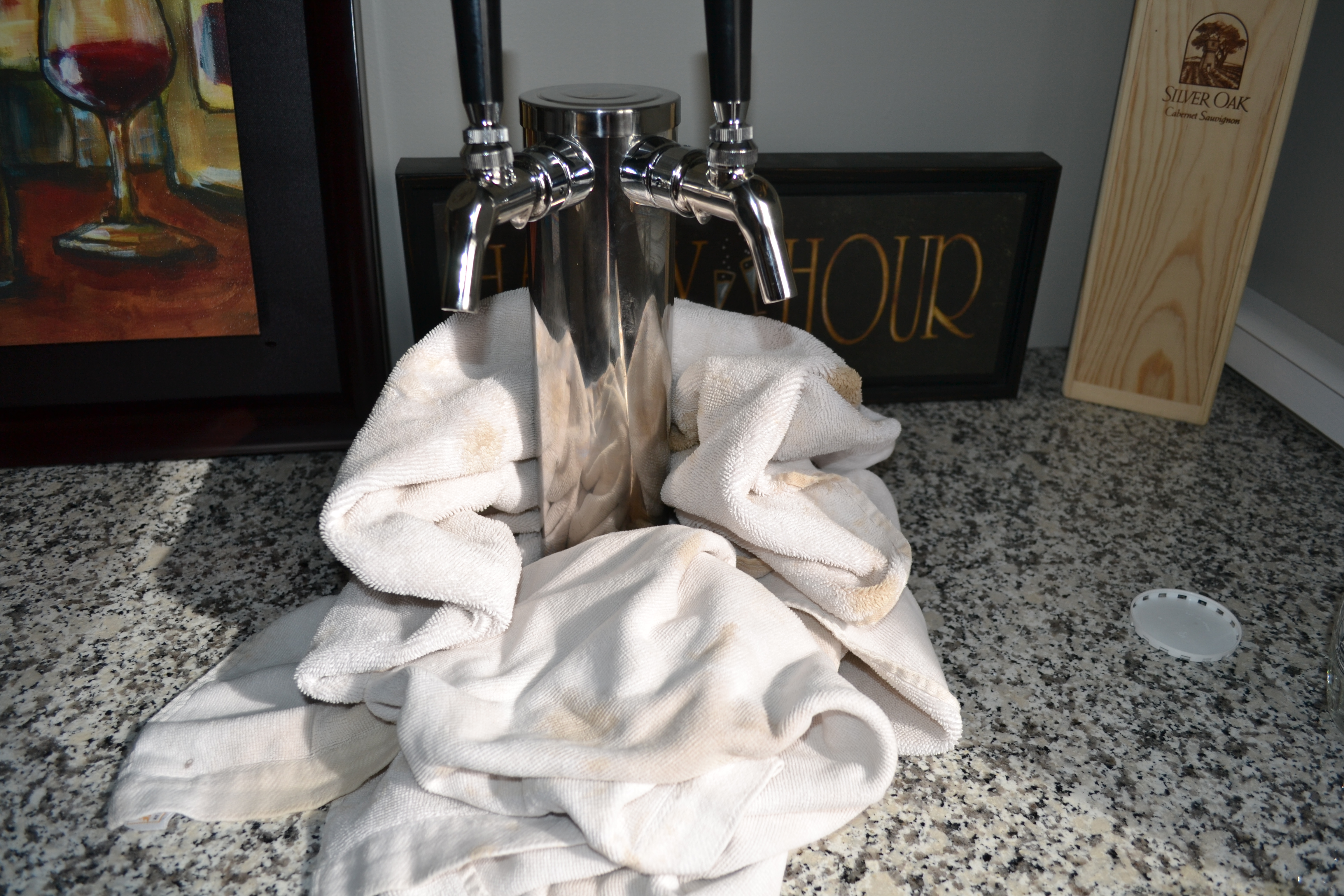 And viola! The beer/foam in those mugs is all it took to get everything adjusted just right. On the left is Finnigans Irish Amber from Minneapolis and on the right is Deshutes Black Butte Porter, from Oregon. Black Butte was one of the first dark beers that I liked, it’s like strong cold coffee. Finnigans is a great light beer, plus 100% profits are donated to the Finnigans Community Fund. 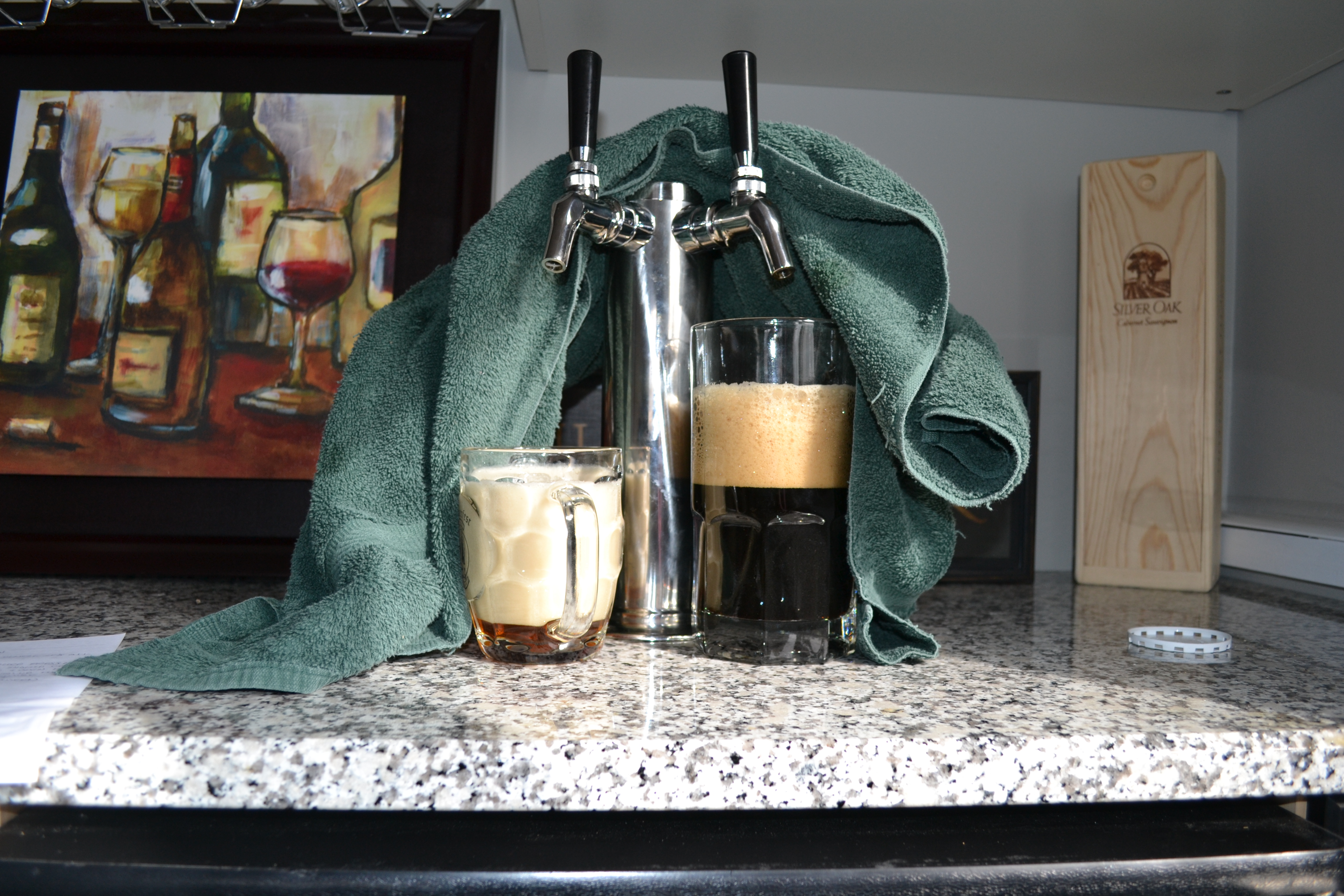 The kegs are apparently in their prime for about a month but are still good for up to 3 months. So come over and grab a mug or boot and fill ‘er up!