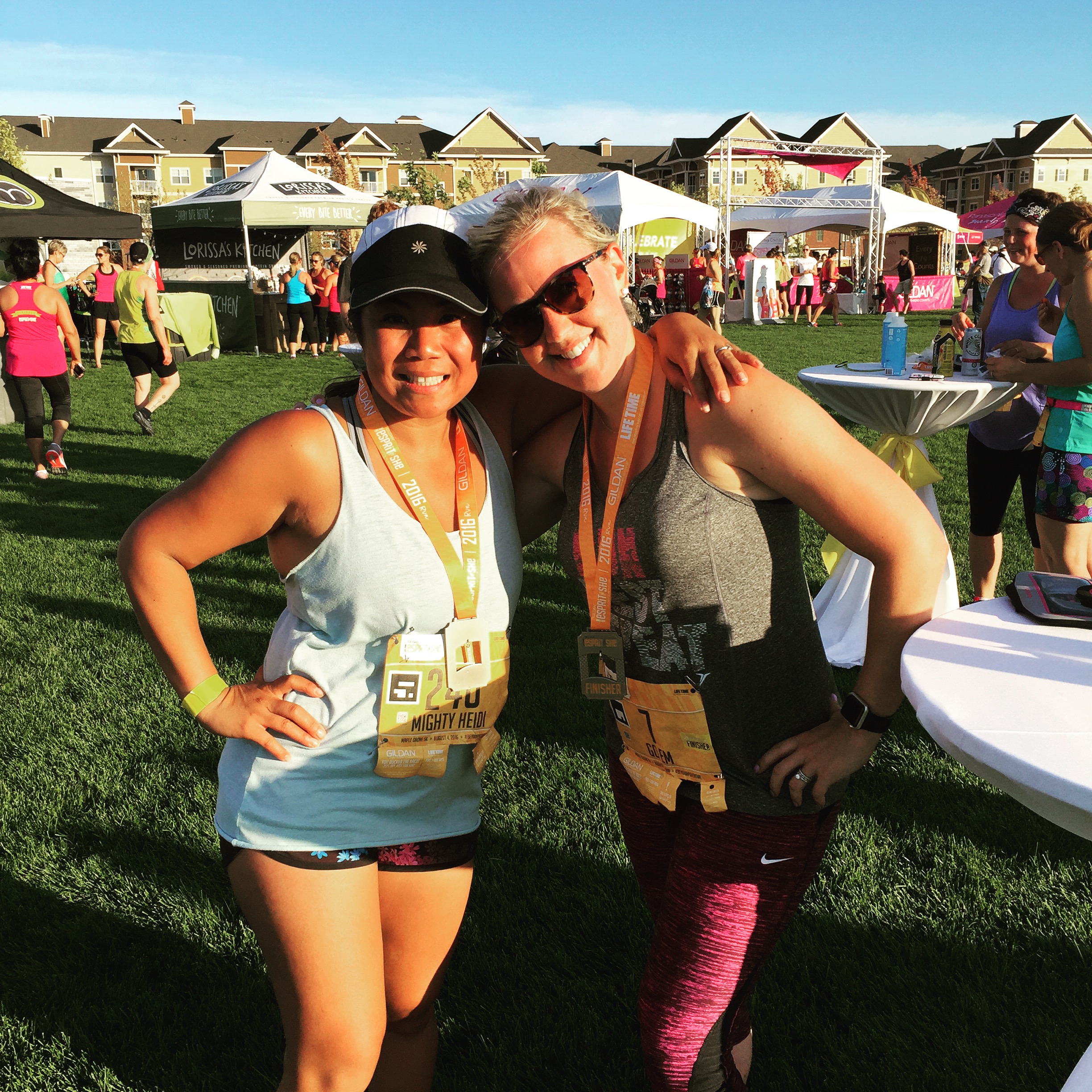 Usually if I sign up for a race I have motivation to train, but this time my biggest motivation was the inconsiderate girl running with bad music blaring from her cell phone in her pocket.

My friend Heidi and I signed up for the Esprit de She Maple Grove 5K several months ago while there was a promo offering a reduced entry fee. We both committed to training to run a solid race, but both of us missed the boat completely.

So when the race day came we were both aiming for doing 10min/miles. The waves were really large because they were set up by a whopping 1min/mile intervals, starting with sub 9:30min/mile, then with our 9:30-10:30min/mile group. 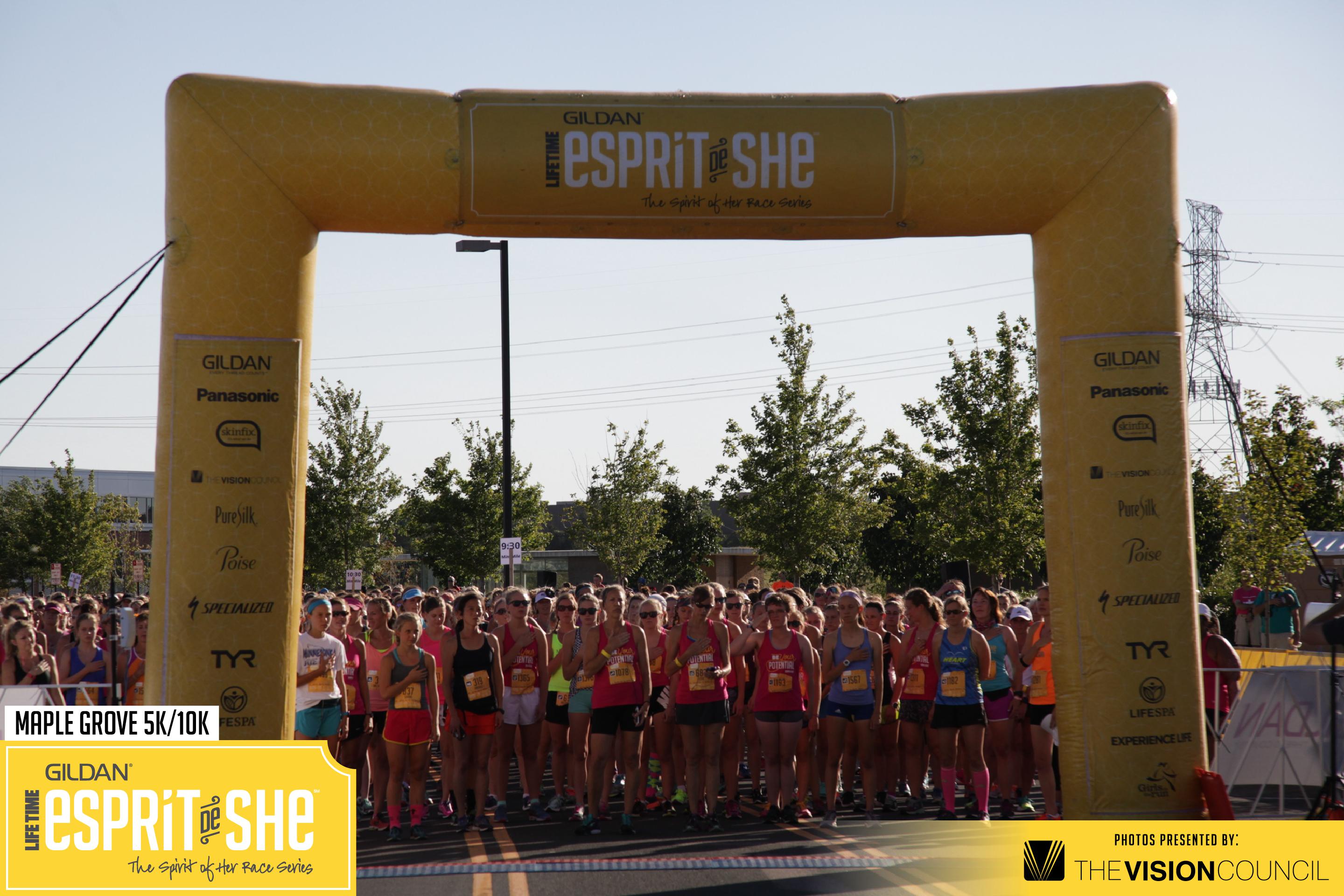 The first mile went by really fast, the route was almost all on trails and through little neighborhoods there were lots of people that watched and cheered from their yards. 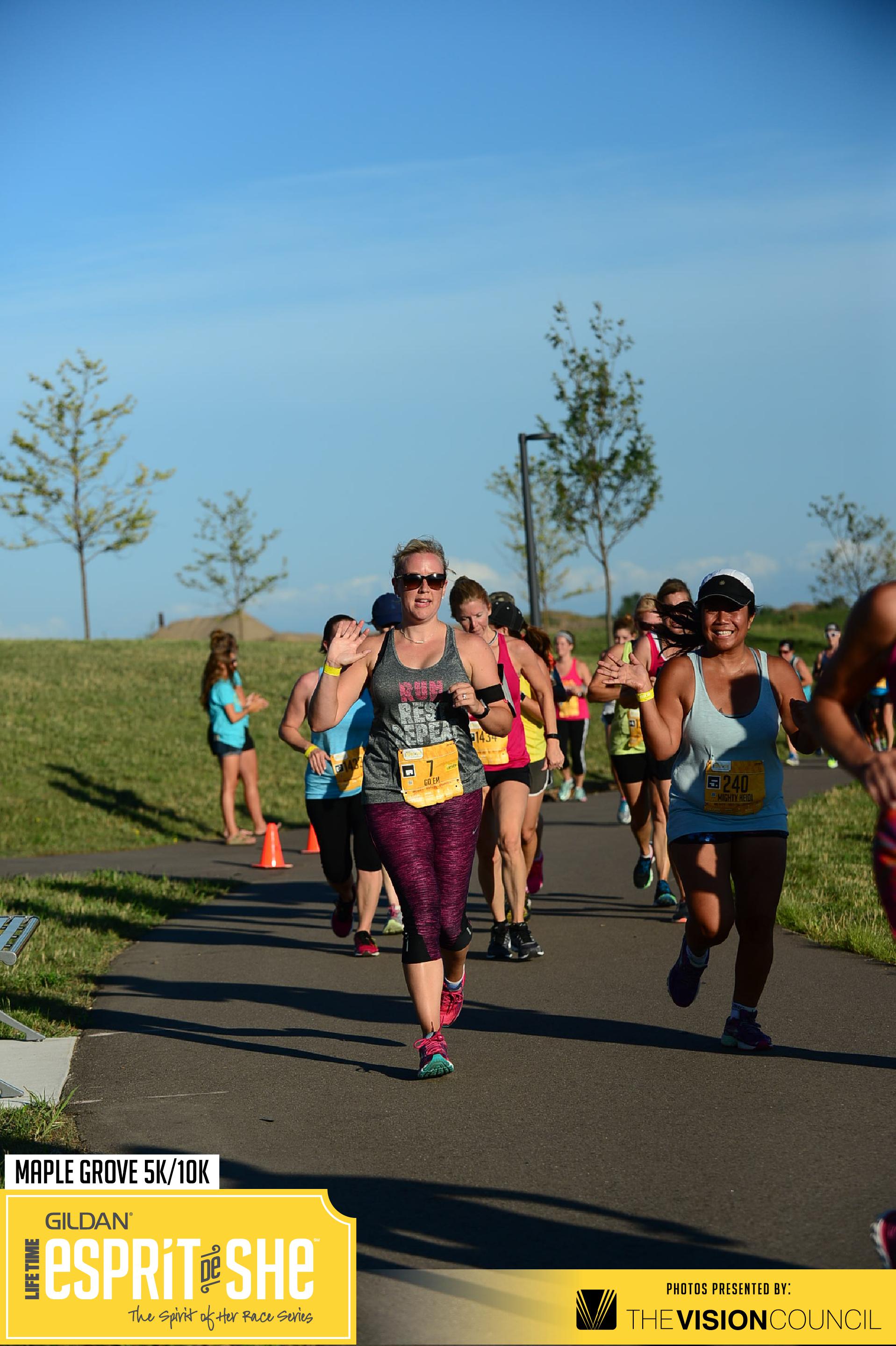 Our smiles quickly faded at about 2 miles when we ran into the music girl. She was using us to pace herself. She would run for awhile, then walk until we caught up with her and then start running again. So we were always within earshot of her stupid music. When we could see the finish line we agreed we had to beat her, so we both picked it up a notch and zoomed past her. None of our finishing photos were flattering, but this one shows how happy we were to beat her. They had beer, wine, and White Claw Hard Seltzer– the black cherry was our favorite. This year’s food was seriously lacking, especially when compared to Esprit de She 50th and France 5K last year. The soggy tortilla encased 1 sorry piece of ham, swiss cheese, and iceberg lettuce. 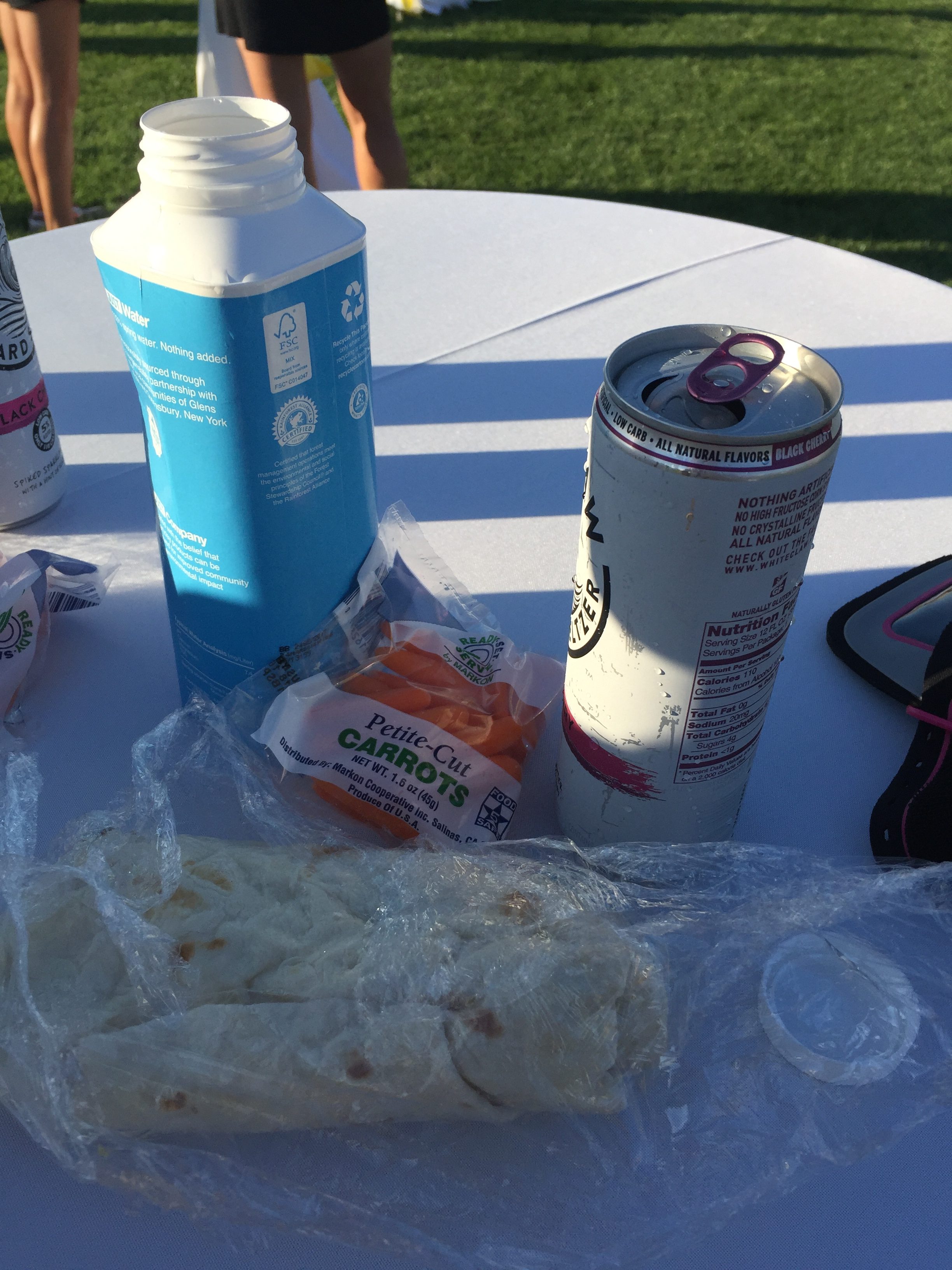 Another odd thing was the timing. Our official time was 30:59, averaging 9:59min/mile. I also had my mapmyrun app running during the race, with a time of 31:32 (which is understandable cause I’m not great at clicking it on/off in the midst of starting/finishing the race). The bigger discrepancy was with the distance, mapmyrun said we went 3.25 miles, giving us a speed of 9:43min/mile. Which I like a lot more.

Maybe it was because the finish line was in a U shape, so while we were sprinting to leave the music girl in the dust we had to take 2 90º turns. Not easy when you’re running full speed.

How cute is Heidi? I love her smile. 🙂 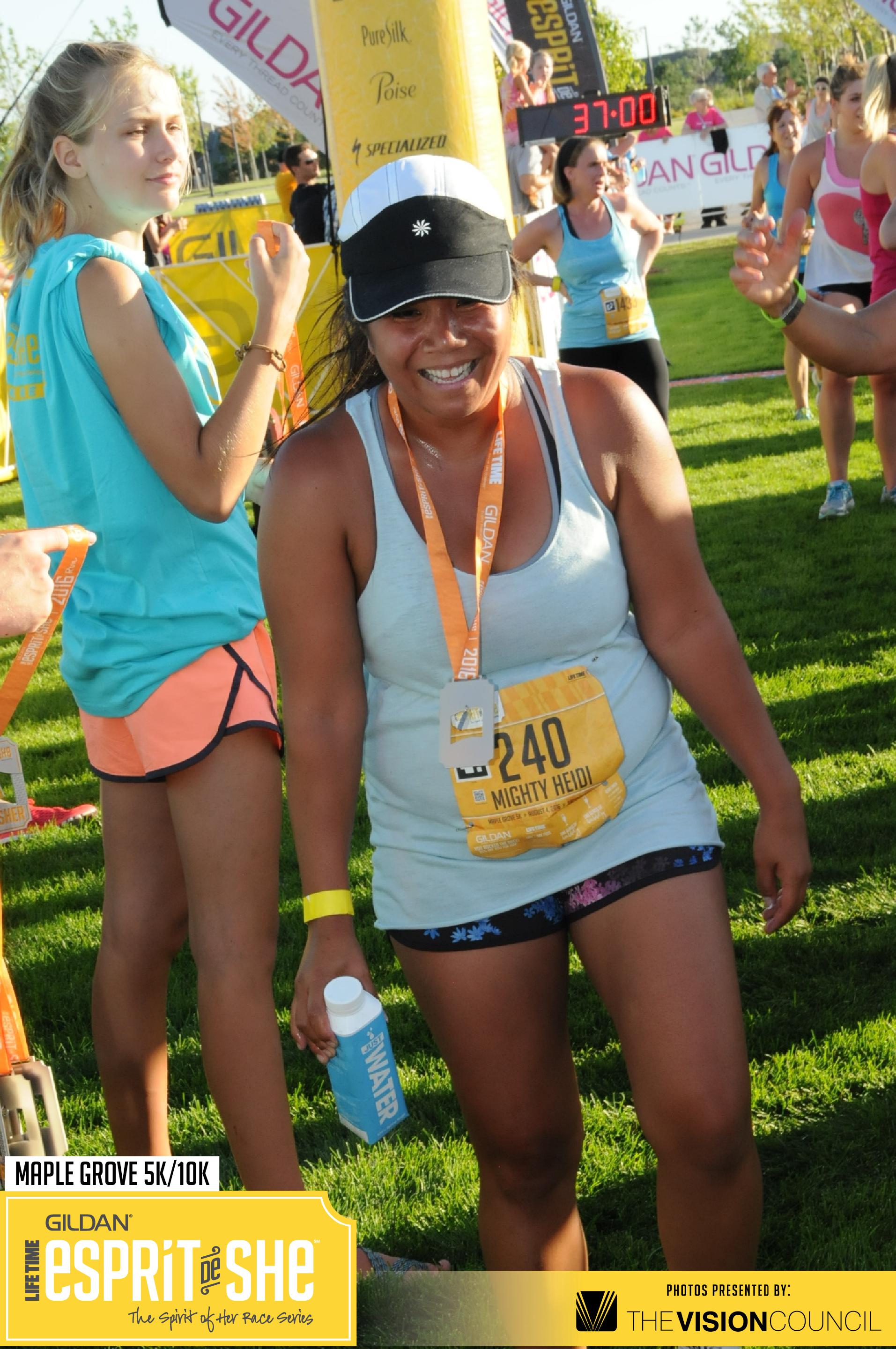 Regardless of the music girl, the timing, and the turns at the end it was still a good race. Better than sitting on the couch and eating a bag of chips.

One thought on “2016 Gildan Esprit de She Maple Grove 5K”