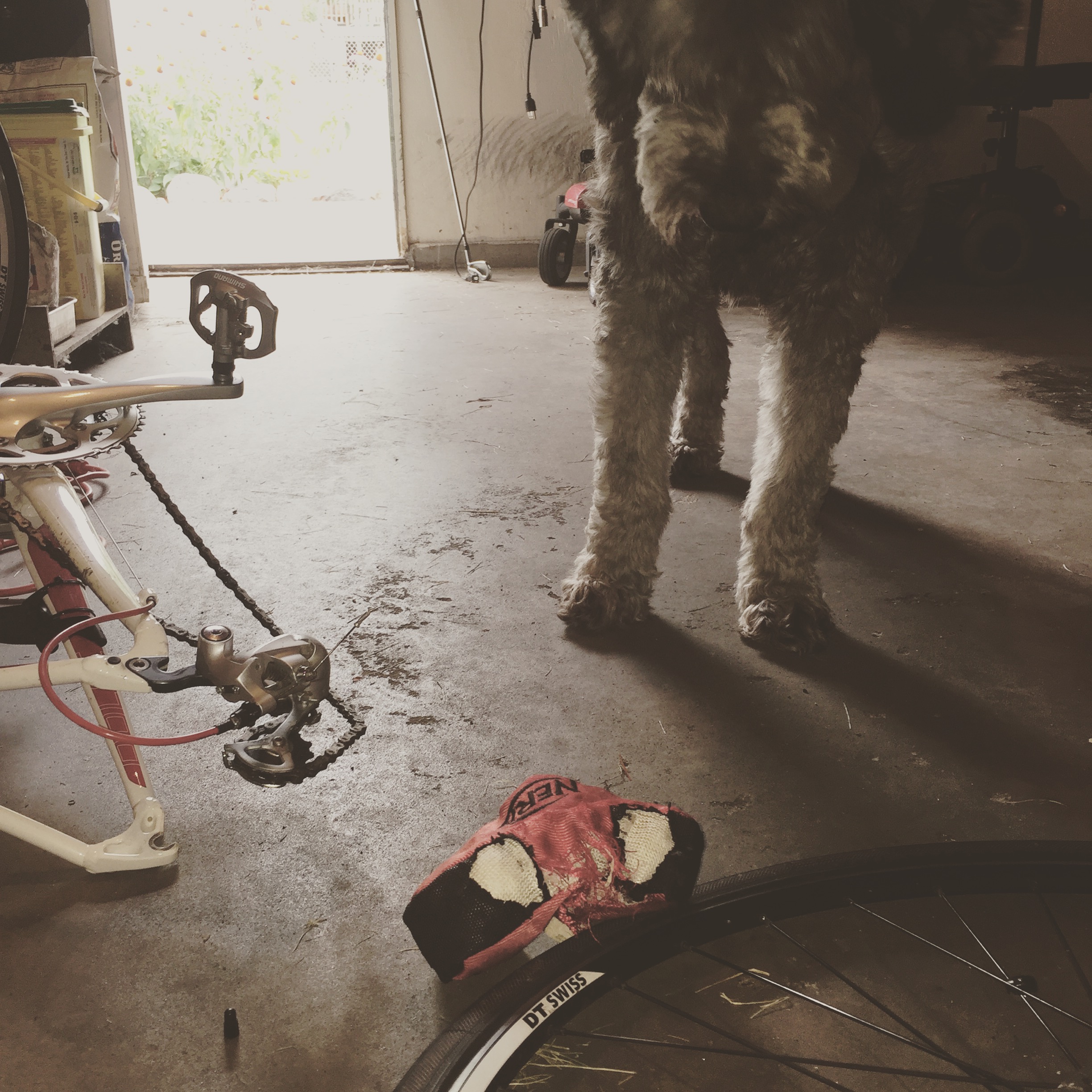 After sharing my mid-year mileage goals I’ve been pumped to get riding. After my bike tune-up my bike was working like a charm, until I ran over some stupid metal shards. Sophie and I played fetch while I was trying to fix it.

—warning: this post contains a lot of words- mostly rants and few pictures.

The first flat I got was a slow leak, which I discovered after one of my long rides. I didn’t notice at all during the ride, but the next time I went to ride it was completely flat. I inspected the tire and couldn’t find anything and a few times I was even able to pump it back up and ride for around 10 miles. Then I went out and didn’t make it around the block before it went flat and I found the culprit. 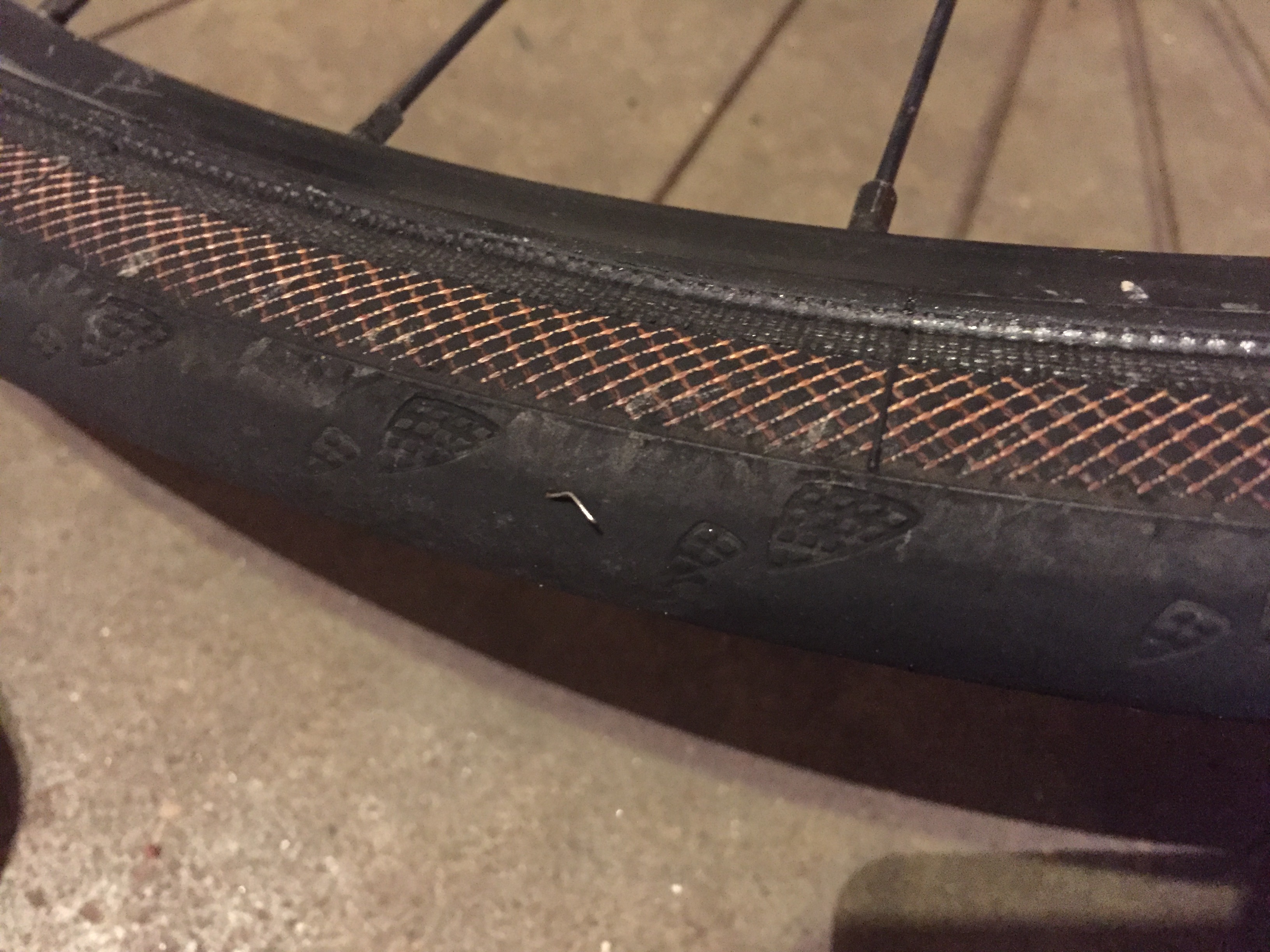 I took out the old tube, slid in a new one, and put in a tiny bit of air. Tiny… 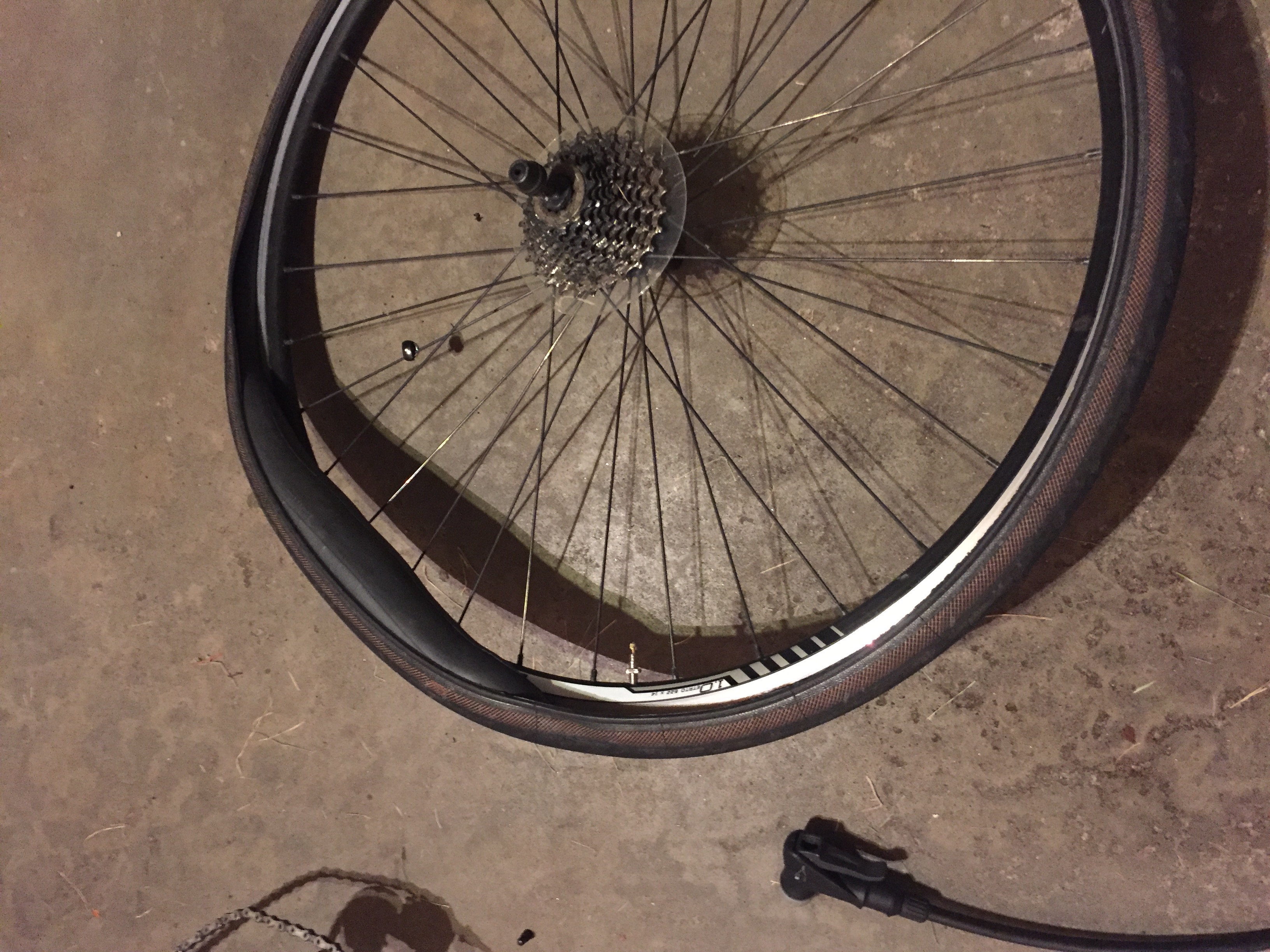 Whoops! I took some air out, shoved it in the tire, put the tire back in the rim and pumped it all the way up. I rode around the block 3 times and while I was pushing it back into the garage the tube exploded. With my ears ringing I quit. I’ve replaced several tubes, the same way, with no issues. So, I brought it into NOW Bike & Fitness. They found another piece of metal and replaced my tube for $17. “Real” cyclists probably see this as a complete waste of money, but for me, it was well worth the hassle. I’ll let someone else get greasy hands all day. (A new tube itself is around $7, so it was really only $10.)

After that I did a few rides, one long one and a few short. I was amped to get in a mid-week ride! The back tire was a little low, which should have been a tip-off for me. I pumped it up to 100lbs of pressure (or so the gauge said), set it outside the garage, and before I was out the front door I heard it pop. My time (and patience) was limited, so instead I downloaded another episode of the Serial podcast and took Sophie for a long walk instead. (I don’t know about you, but I’m starting to think Sophie may have planted those shards of metal knowing it’ll result in either playing fetch or going for a walk…) 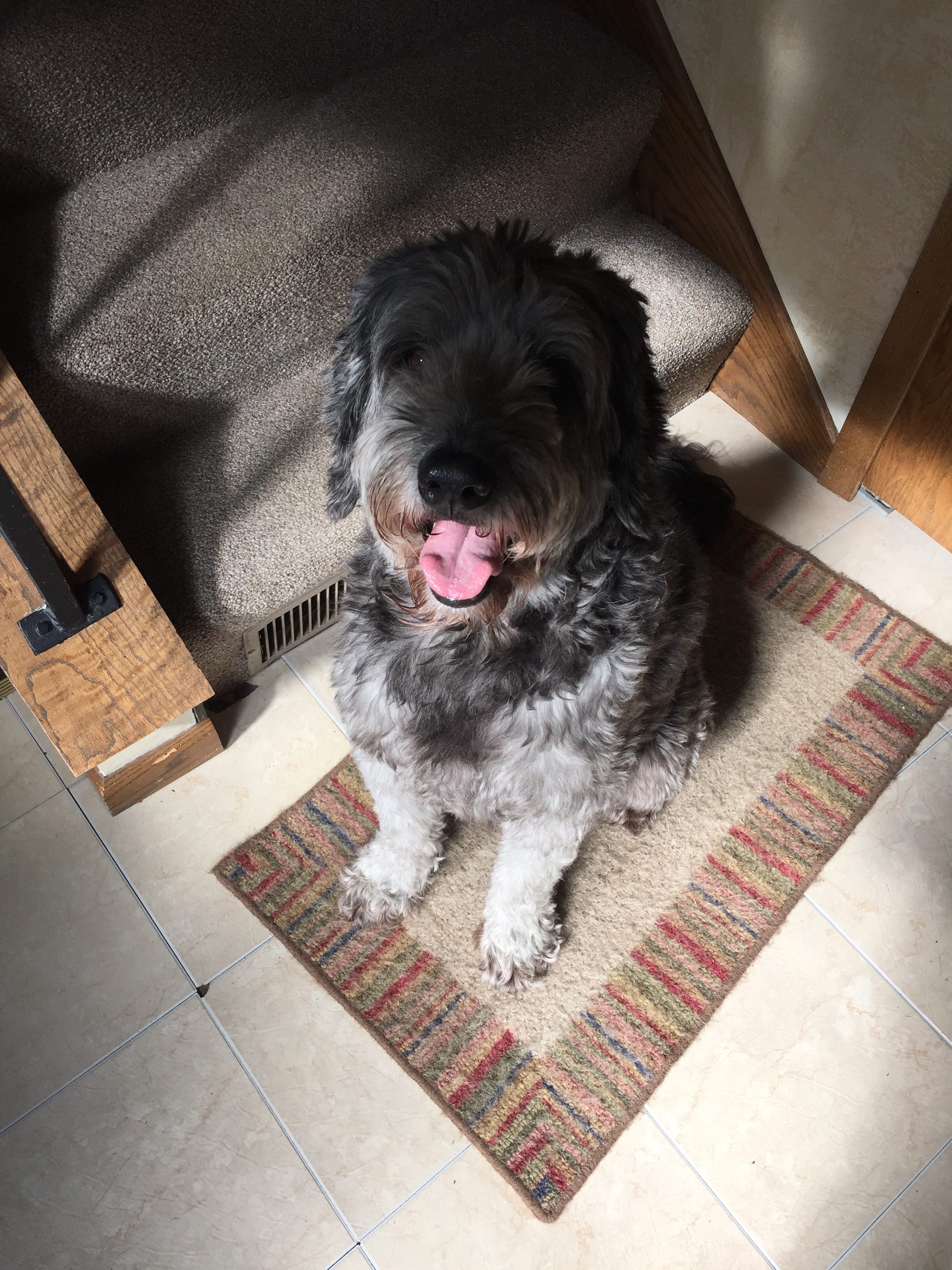 Yep, those walls still haven’t been stripped of the wallpaper glue.

This time when I went to NOW I brought my bike pump too so they could tell me WTF was wrong with it. They told me it was just bad luck, the pump is fine. They replaced my tube, again, and this time I bought 2 extra tubes to replenish my stock. It had been a few years since my last flat and so I’m hoping I’m now good for several years. I haven’t had any more flats, but have had one very embarrassing fall in front of two cars. The guy that witnessed it even got out of his car to make sure I was ok. I was so embarrassed! I was clipped out, but when I looked back at my weight shifted to the wrong side. It all happened in slow motion and yet so fast I couldn’t unclip my other foot. I jumped up and assured him I was fine, but my pride was shot. I laughed at myself for the next two miles and only after I got home realized I had the tiniest of tiniest scrape on my knee. I’m laughing just writing this, I wish someone had a video tape of it. 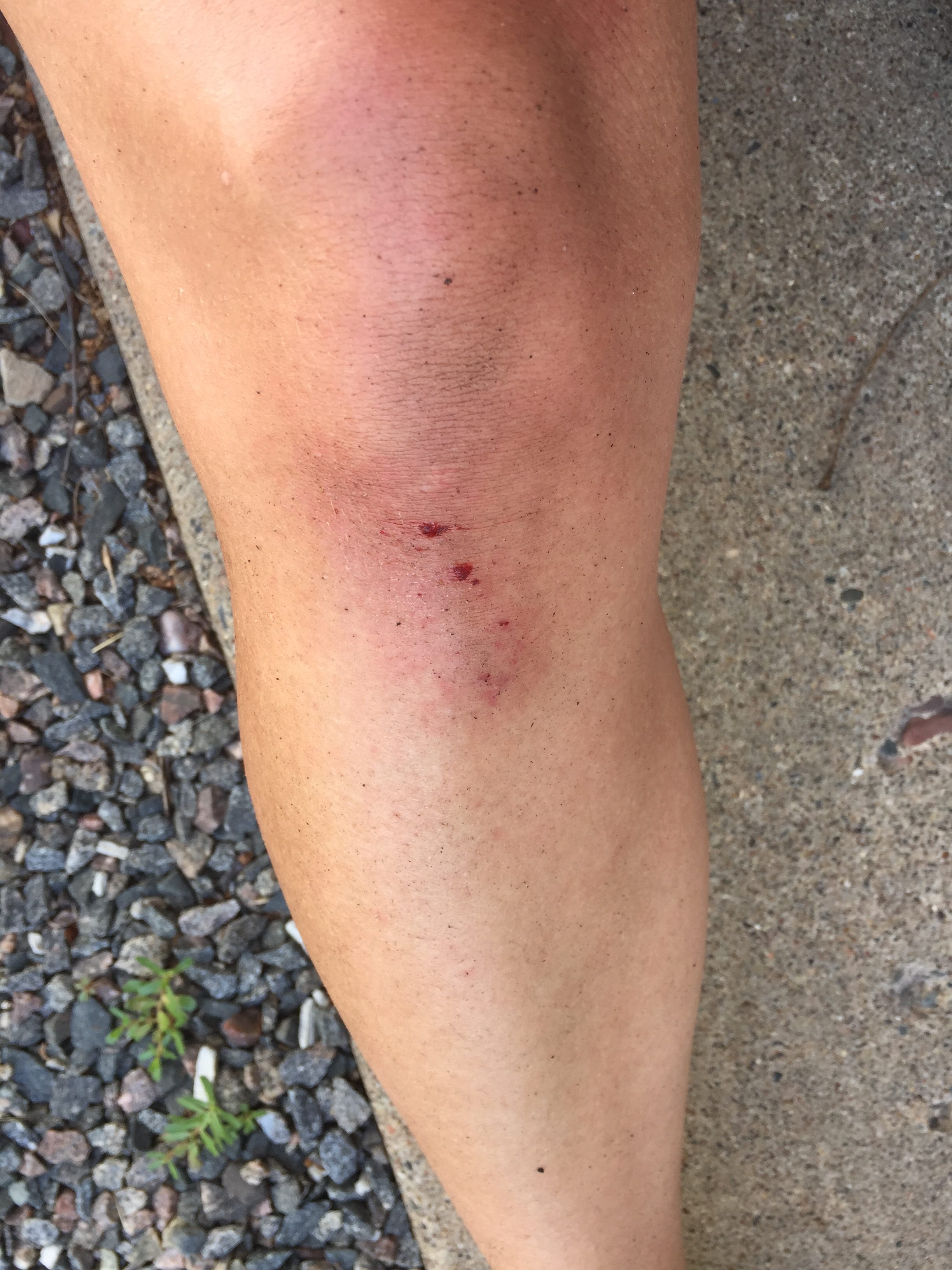 Flats and falls aside, where does that leave my mileage goals? Well, thanks to not booking something every single night of the week like I usually do, I’ve been able to get in a few rides. I’m at 555 miles. Less than 340 miles away from my goal. I can do it.