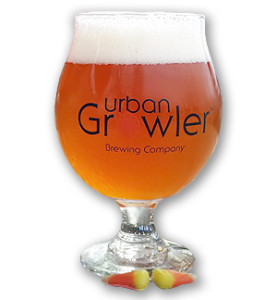 A few Fridays back Nolan and I visited Urban Growler because I wanted to try the Candy Corn Imperial Cream Ale, and try their food. The food was so-so, but the beer, atmosphere, and bartenders were awesome! So many of the breweries around the Twin Cities employ the biggest beer snobs/entitled hipsters, but the guys at Urban Growler were anything but.

When the Minnesota Gopher Volleyball team isn’t playing at home, we try to catch the game on TV. We can usually catch it on the Big10 Network or ESPNU. They are currently ranked #3 in division 1. Ski-U-Mah!

This clutch
These sparkling waters (I still love me some La Croix too.)
These Bistro Bowl® Salads (bought at Target)

I finished The Girl with Nine Wigs and was excited to find out that it was made into a movie! Sophie van der Stap’s memoir is about her fight with cancer at age 21 and how she uses her collection of wigs to escape the difficult chemotherapy treatments. Even though the subject matter is sad, the book made me smile a lot too. One of my favorite parts is when the guy she is kissing starts running his hands through her wig and she wonders if he can tell it’s a wig or not. I really hope that’s a scene in the movie!

I saw Diane Guerrero (Maritz Ramos on Orange is the New Black) promoting In the Country We Love: My Family Divided, on a Chelsea talk show. It was interesting and well written, but I feel like it could have been better if she waited until she was older. (She is younger than me!) But, I also understand she was trying to bring timely attention to immigration issues.  To her credit the book is 98% about her story and only the last chapter gets into the nitty gritty political/social/economic issues and statistics. After suffering through multiple presidential debates, I just wasn’t in the political-issues-mood and skipped the last chapter.

After two semi-sad books, I opted for Amy Schumer’s The Girl with the Lower Back Tattoo. Within the first few chapters I wanted to tweet some quotes, including, “Social media is a great tool for all of us introverts and decent people alike as it speeds up the time between thinking someone is great and realizing they’re the worst.” I read it once at work and laughed so hard I cried. Who said crying at work is such a bad thing? I’ve always liked Amy Schumer, but after reading her book, she propped herself up in my book (pun intended), right next to Chelsea, Amy P., and Tina.

Speaking of Twitter…. if you follow me (@em_everything), you’d know I’ve read The Heavenly Table by Donald Ray Pollock. Amazon does a much better job describing the book. “It is 1917, in that sliver of border land that divides Georgia from Alabama. Dispossessed farmer Pearl Jewett ekes out a hardscrabble existence with his three young sons: Cane (the eldest; handsome; intelligent); Cob (short; heavy set; a bit slow); and Chimney (the youngest; thin; ill-tempered). Several hundred miles away in southern Ohio, a farmer by the name of Ellsworth Fiddler lives with his son, Eddie, and his wife, Eula. After Ellsworth is swindled out of his family’s entire fortune, his life is put on a surprising, unforgettable, and violent trajectory that will directly lead him to cross paths with the Jewetts. No good can come of it. Or can it?”

I read the first few chapters of Shrill: Notes from a Loud Woman but couldn’t get into it. It’s gotten great reviews and I wanted to like it, but the endless talk of being a fat girl and having your period was too much.

I read When Breath Becomes Air in two days and if it wasn’t for nagging responsibilities (like eating), I could have easily read it in one. HIGHLY recommend it.

After really liking Unbroken (my review), I realized I really like military books and I thought I’d give a military audio book a try with American Sniper. It’s an autobiography written by the most successful sniper, United States Navy SEAL Chris Kyle. Kyle served several tours in Iraq and was awarded several metals including a Silver Star Medal, a Navy and Marine Corps Achievement Medal, and 4 Bronze Star Medals.

His book was published in 2012 and became a New York Times best seller. In 2013 Kyle was tragically killed at a gun range by a former marine with PTSD. So sad. In 2014 Clint Eastwood directed the movie American Sniper. Then, former Minnesota Governor Jesse Ventura tried to sue for defamation and claimed “the whole story was fabricated,” but the case was tossed out by a federal appeals court. Needless to say, I had a lot of background information floating around in my head, but I tried not to let it cloud my head while listening to Kyle’s story.

If The Weekenders by Mary Kay Andrews was a movie, I’d call it a chick flick. (Is there an equivalent term for books?) It’s full of love, drama, money, humor and a mysterious murder. It was easy to follow along in the car, but I would argue it’d make for a much better beach read. I will be searching out Mary Kay Andrews books for my next vacation.