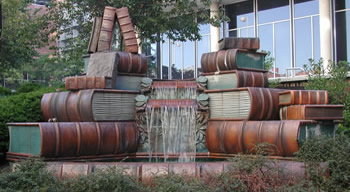 You know how much I like to read, so when we decided to move to Cincinnati I started researching Cincinnati books. I’ve put together a list books I want to read that are about Cincinnati, or are set in Cincinnati. (Photo above is of the Amelia Valerio Weinberg Memorial Fountain outside the main library downtown Cincinnati.)

I’m still plugging away at my 2017 book list. But, as I’ve mentioned before, that at the rate I’m going I’ll need to create a new list. New city, new house, new book list. 🙂

(All book descriptions are from Amazon.)

Liz is a magazine writer in her late thirties who, like her yoga instructor older sister, Jane, lives in New York City. When their father has a health scare, they return to their childhood home in Cincinnati to help—and discover that the sprawling Tudor they grew up in is crumbling and the family is in disarray.

Calling Me Home by Julie Kibler

Eighty-nine-year-old Isabelle McAllister has a favor to ask her hairdresser Dorrie Curtis. It’s a big one. Isabelle wants Dorrie, a black single mom in her thirties, to drop everything to drive her from her home in Arlington, Texas, to a funeral in Cincinnati. With no clear explanation why. Tomorrow.

JoEllen’s parents divorced when she was very young, so she was used to splitting her time between them, shuttling four blocks from one Cincinnati apartment to another. But when her dad moved to the old family farm last year, her life was suddenly divided. Now on weekdays she’s a city girl, called Ellen, who hangs out with her friends, plays the sax, and loves old movies. And on weekends she’s a country girl, nicknamed Joey, who rides horseback with her cousin, Hayden, goes fishing, and listens to bluegrass.

The Knock at Midnight by James Reston

It’s 1921, and journeyman infielder Mickey Rawlings finds himself on yet another team, the Cincinnati Reds, who everyone remembers for “winning” the 1919 World Series against the infamous Chicago Black Sox. In an effort to refurbish their image, Oliver Perrimen, a die-hard Reds fan cooks up a memorabilia exhibit of the 1869 Cincinnati Red Stockings, who went undefeated in a historic coast-to-coast romp. But before the tour can reach first base, someone strikes Ollie out with a well-placed bullet. Since murder seems to follow Mickey around like a hitting slump he can’t quite quit, he starts snagging clues. Soon enough he finds his hands full with a forgotten murder, breaking and entering, and an angry girlfriend. But when the game of his own life is on the line, Mickey Rawlings is a born survivor. At least he hopes. . .

The Cincinnati Kid by Richard Jessup

The Cincinnati Kid, first published in 1963 (and made into a feature film starring Steve McQueen in 1965), is a gritty novel of smoky back-rooms and centered on a young card-shark (“The Kid”) who eventually finds himself in a stud-poker game against the undisputed master (“The Man”).

I’m Glad About You by Theresa Rebeck

Their meeting in a parking lot outside a high school football game was both completely forgettable and utterly life-changing. Because no matter how you look at it, it is piss-poor luck to meet the love of your life before your life has even started. Fierce and ambitious, Alison transforms into a rising TV star in New York City while her first love, Kyle, all heart and spiritual yearning, becomes a pediatrician in suburban Cincinnati, married to the wrong woman. What could these mismatched souls have to do with each other? Everything and nothing. Even as their fates rocket them forward and apart, neither can fully let go of the past.

Woke up lonely by Fiona Maazel

Thurlow Dan is the founder of the Helix, a cult that promises to cure loneliness in the twenty-first century. With its communes and speed-dating, mixers and confession sessions, the Helix has become a national phenomenon—and attracted the attention of governments worldwide. But Thurlow, camped out in his Cincinnati headquarters, is lonely—for his ex-wife, Esme, and their daughter, whom he hasn’t seen in ten years.

One of the Cincinnati books that I found, I’ve already read!  Fractured by Catherine McKenzie (my review) is a thriller about a woman who moves to Cincinnati to get away from a stalker. Good stuff.