A Week at Sandals in Grenada 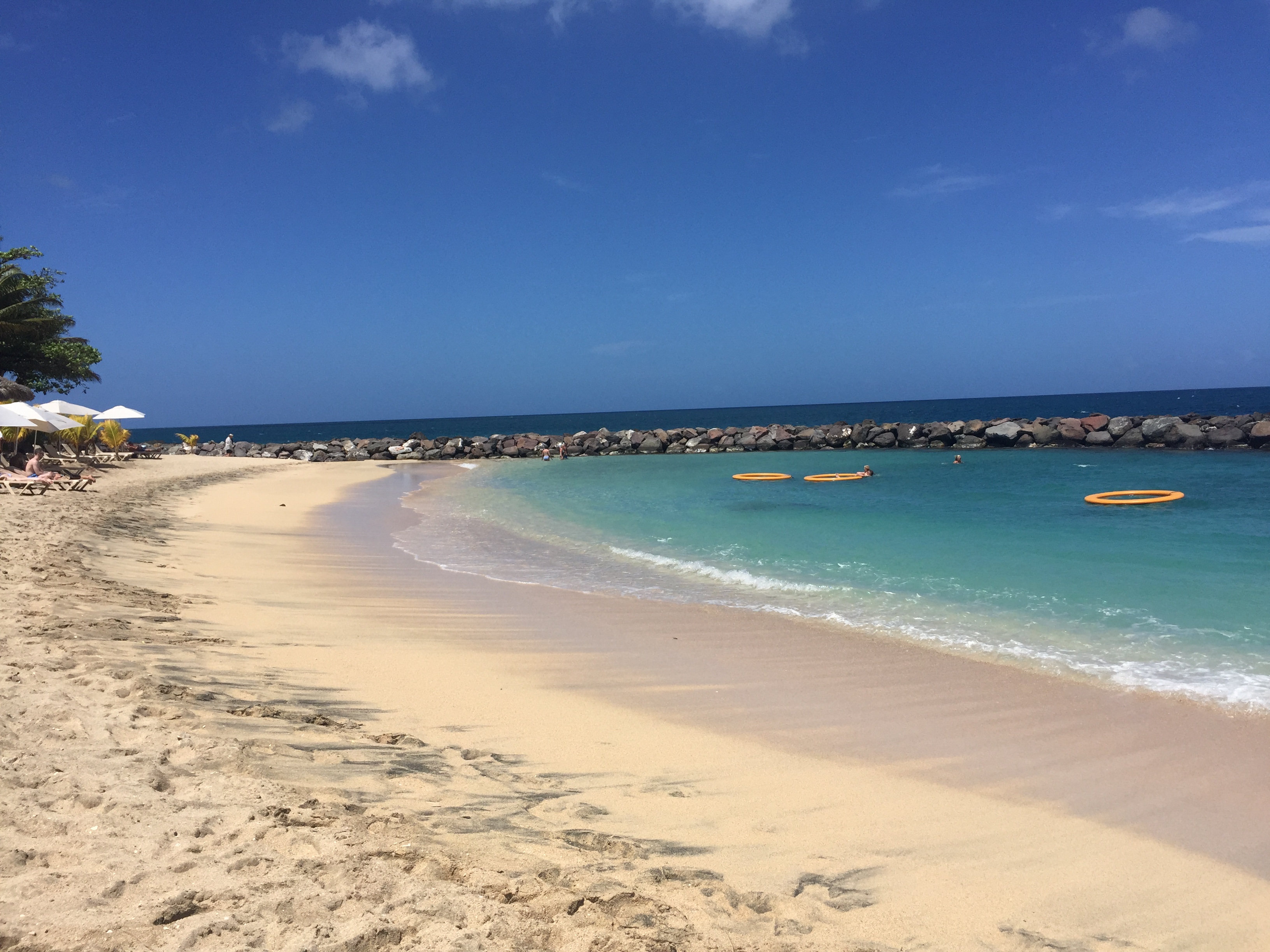 One of the benefits of having a wedding anniversary in February is having a good reason to go on vacation. Last year we didn’t escape the cold by going to Duluth (although they did have record high temperatures that month) but this year we visited Sandals in Grenada with my mom and Scott.

Note: This post was not sponsored by Sandals, I just love it that much! Also, this might be the longest post ever, so grab a drink and get comfy!

The resort has 10 restaurants and 6 bars, plus a hot dog stand, 24-hour room service and a fully stocked bar in our room. We basically ate/drank non-stop for a week. Other than a quesadilla at lunch, all the food was fantastic! Below is a shot of the surf & turf with lobster mac & cheese at Butch’s. 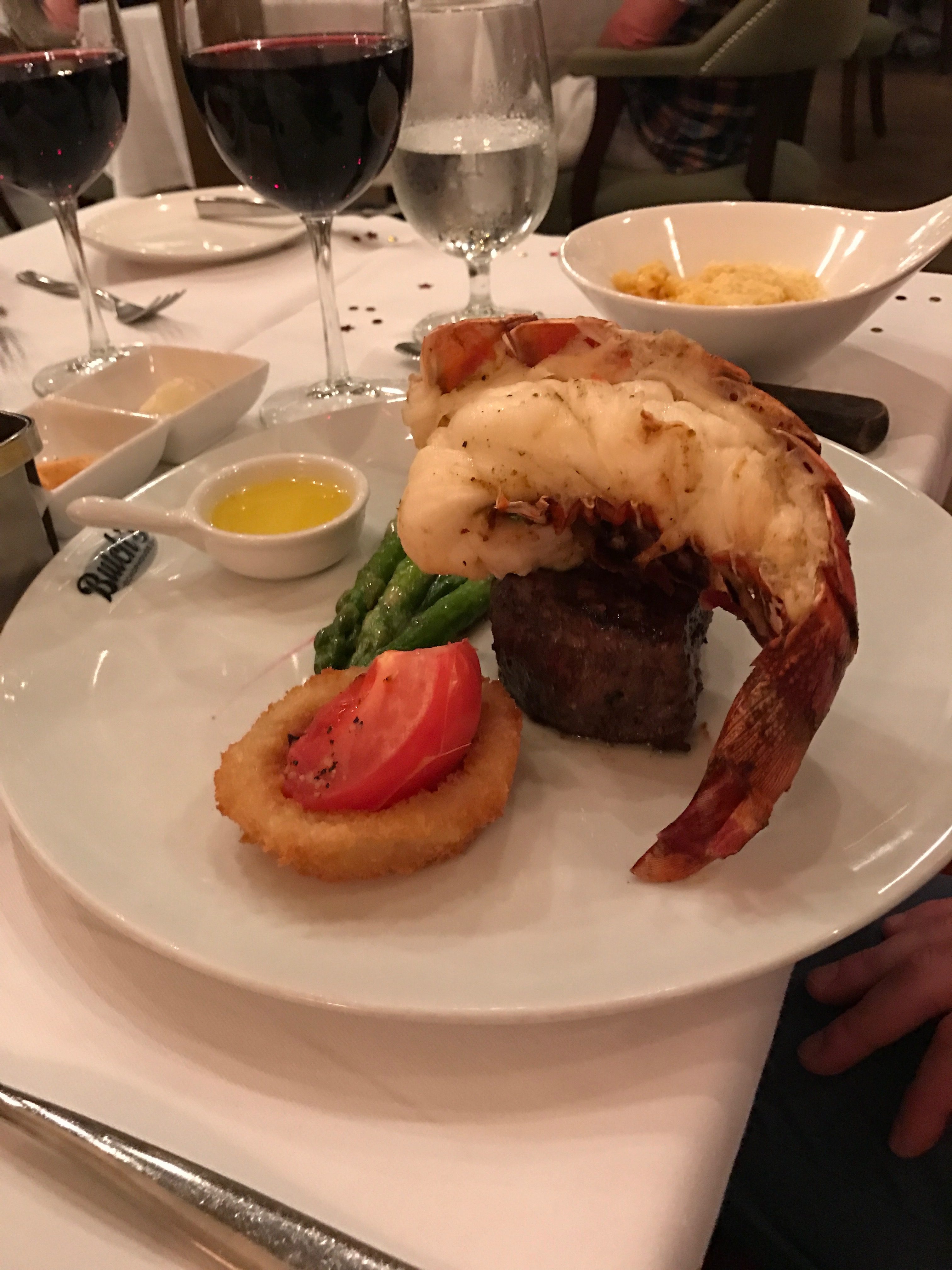 One of our favorite nights was eating sushi at Soy, then going to Cucina Romana for dinner. Like their other resorts, all the food and drink was included at the Sandals in Grenada and we took full advantage. 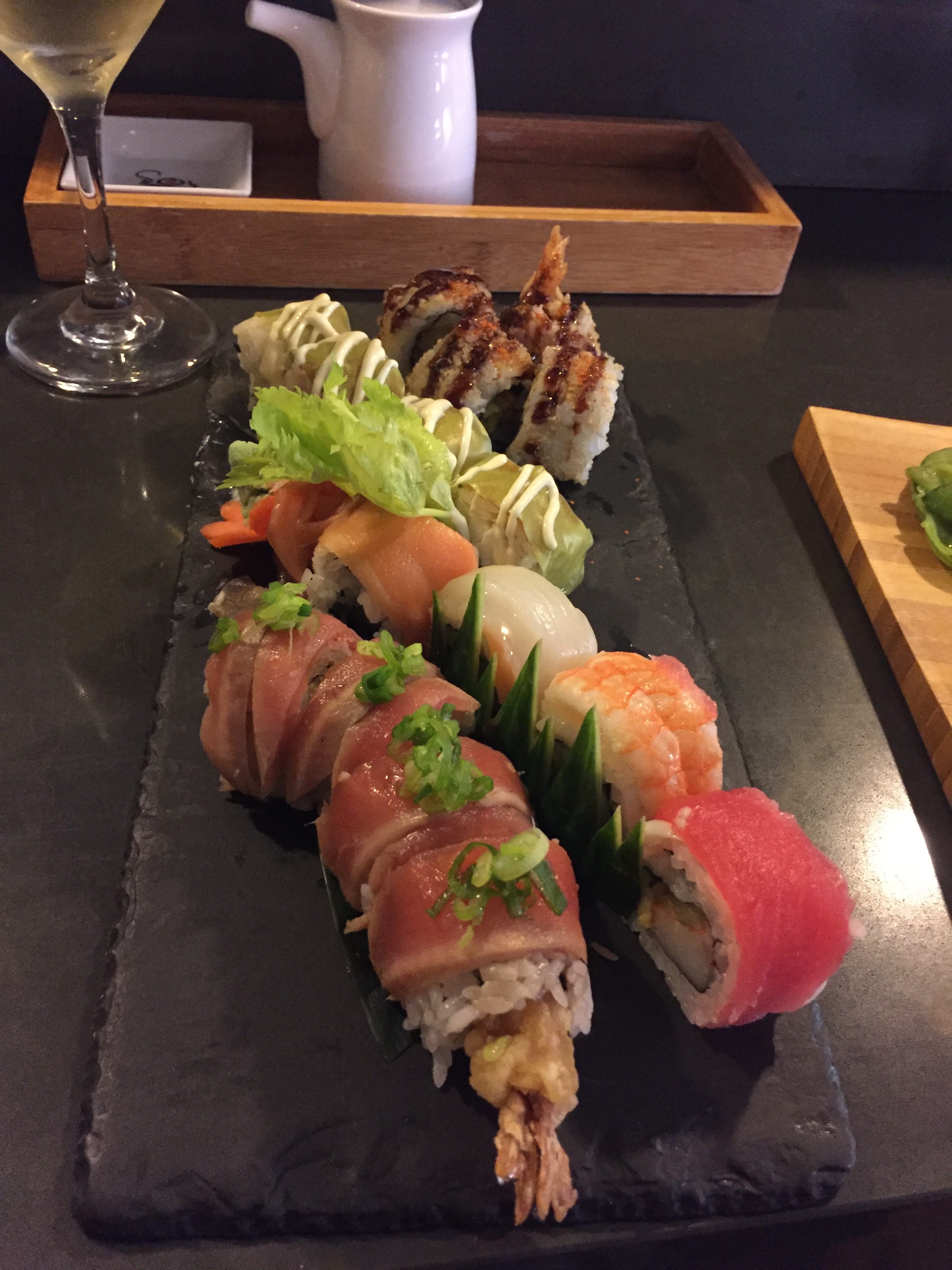 Another fun night was at Kimonos, the hibachi grill, with a flaming onion and catching eggs in our mouths. Scott caught the first one no problem. I missed and it landed in my water! Nolan, on the other hand, went 2 for 4, not a bad egg catching average. 😛 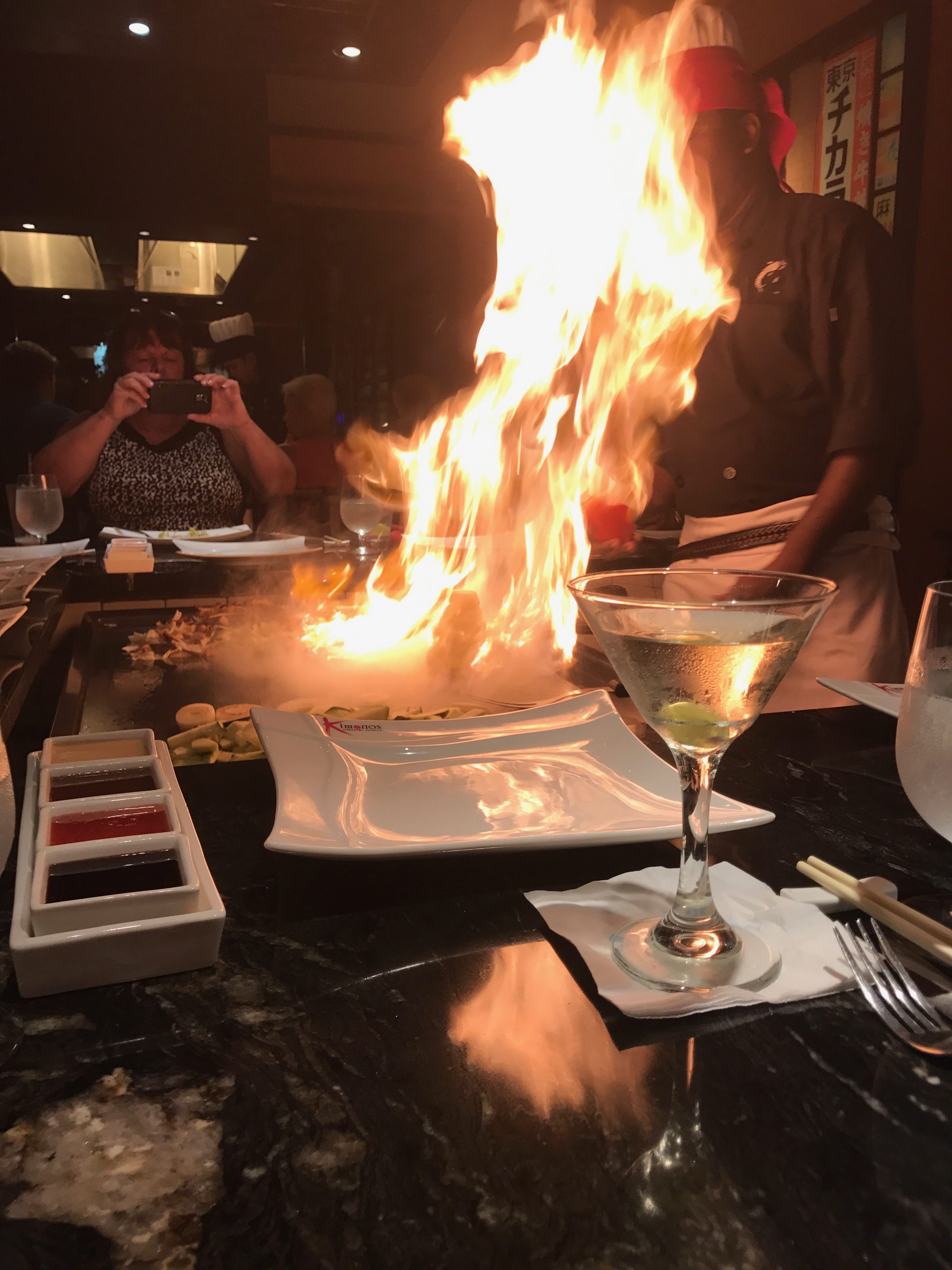 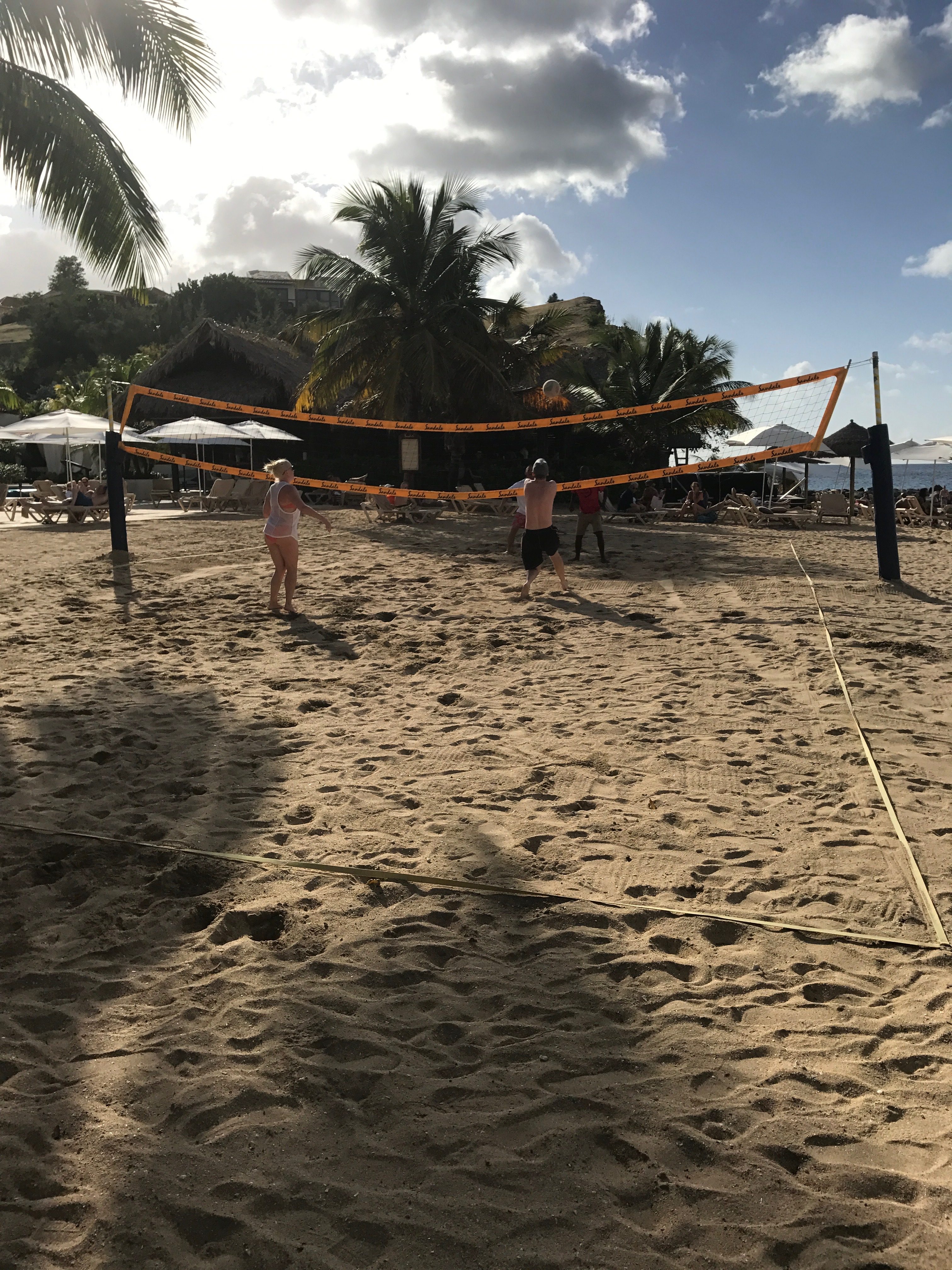 One of the night’s parties was an all-white party including a best dressed contest (we gave it our best shot but came up short 🙁 ) and lots of dancing. 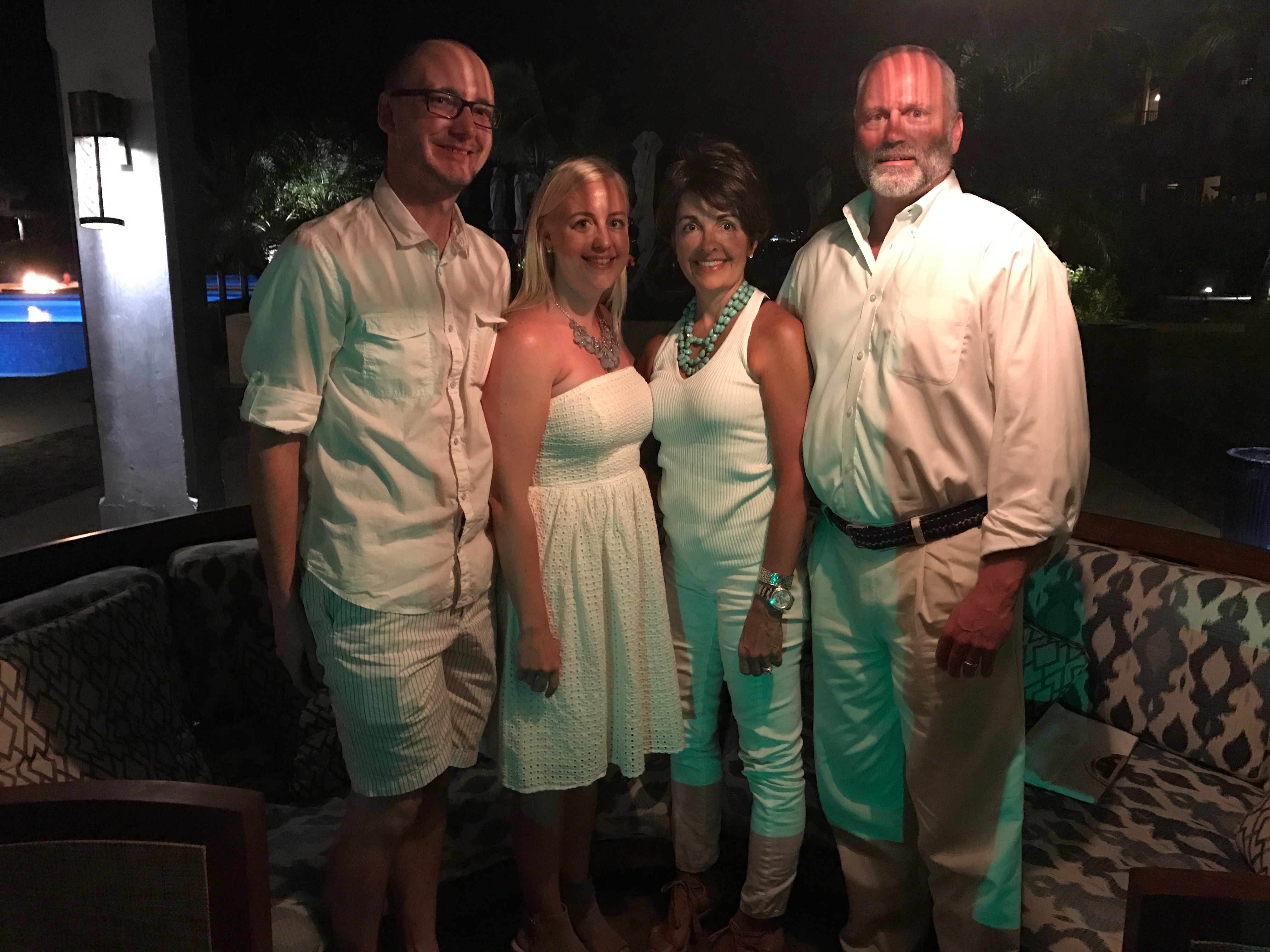 We also went off the resort for a 5-mile mountain bike ride. I realized how much I like my road bike, even on a trainer, more than mountain biking. My mom had no problem with the rough terrain while I fell behind screaming and braking the entire way. Kudos to Scott for being one of the only guys to make it up one of the steep hills. On the second half of the loop we were on the road, where I was much more comfortable, except when my brakes stuck and stopped me going down a hill, haha! (I had flashbacks to when the same thing happened to me as a kid on a family vacation in Hawaii.) Oh, and they drive on the left side! So of course you bike on the left side, which felt so wrong, but even more weird was riding through a round-a-bout backwards. 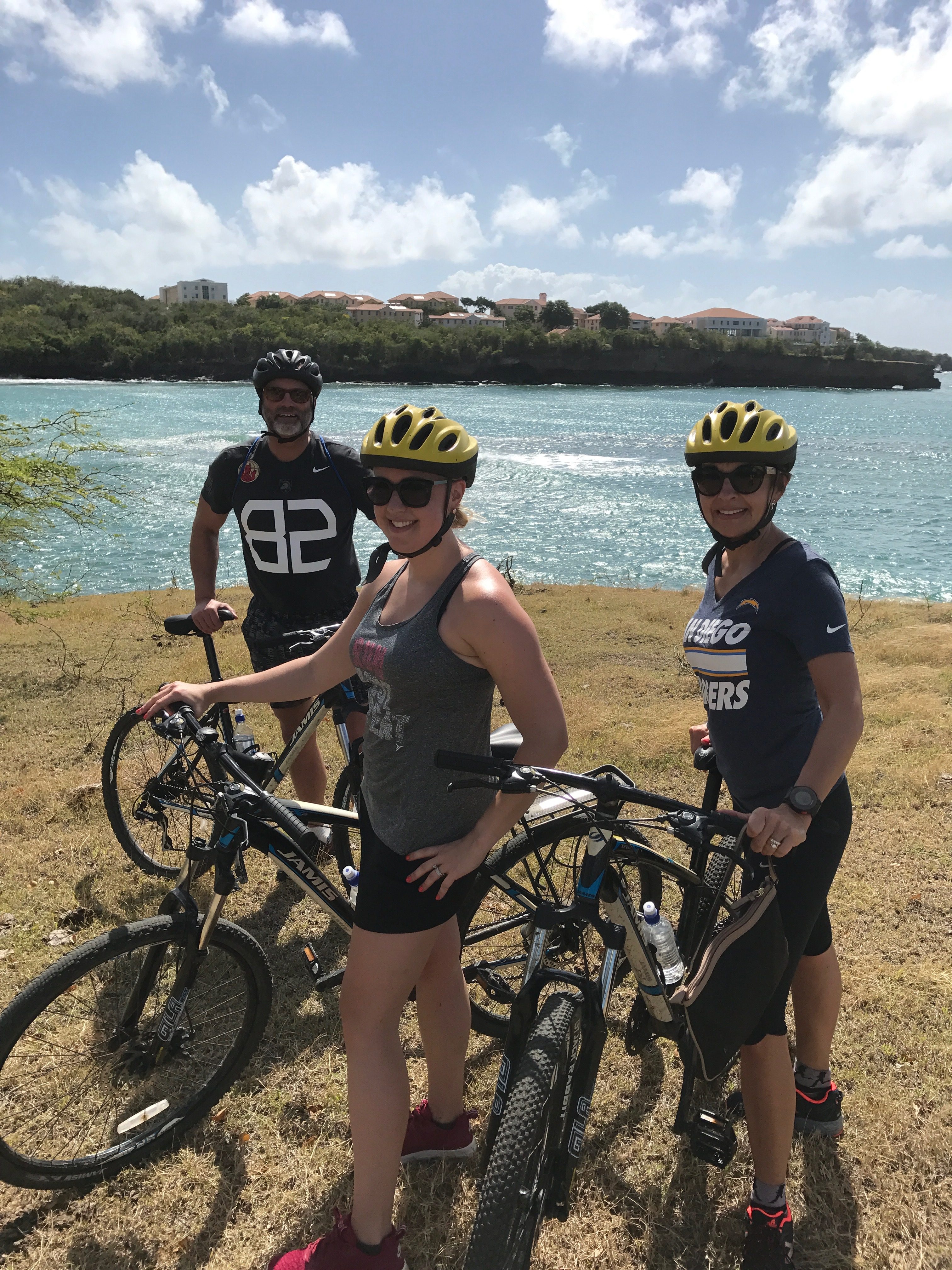 We also spent a fair amount of time just lounging by the pool and reading. 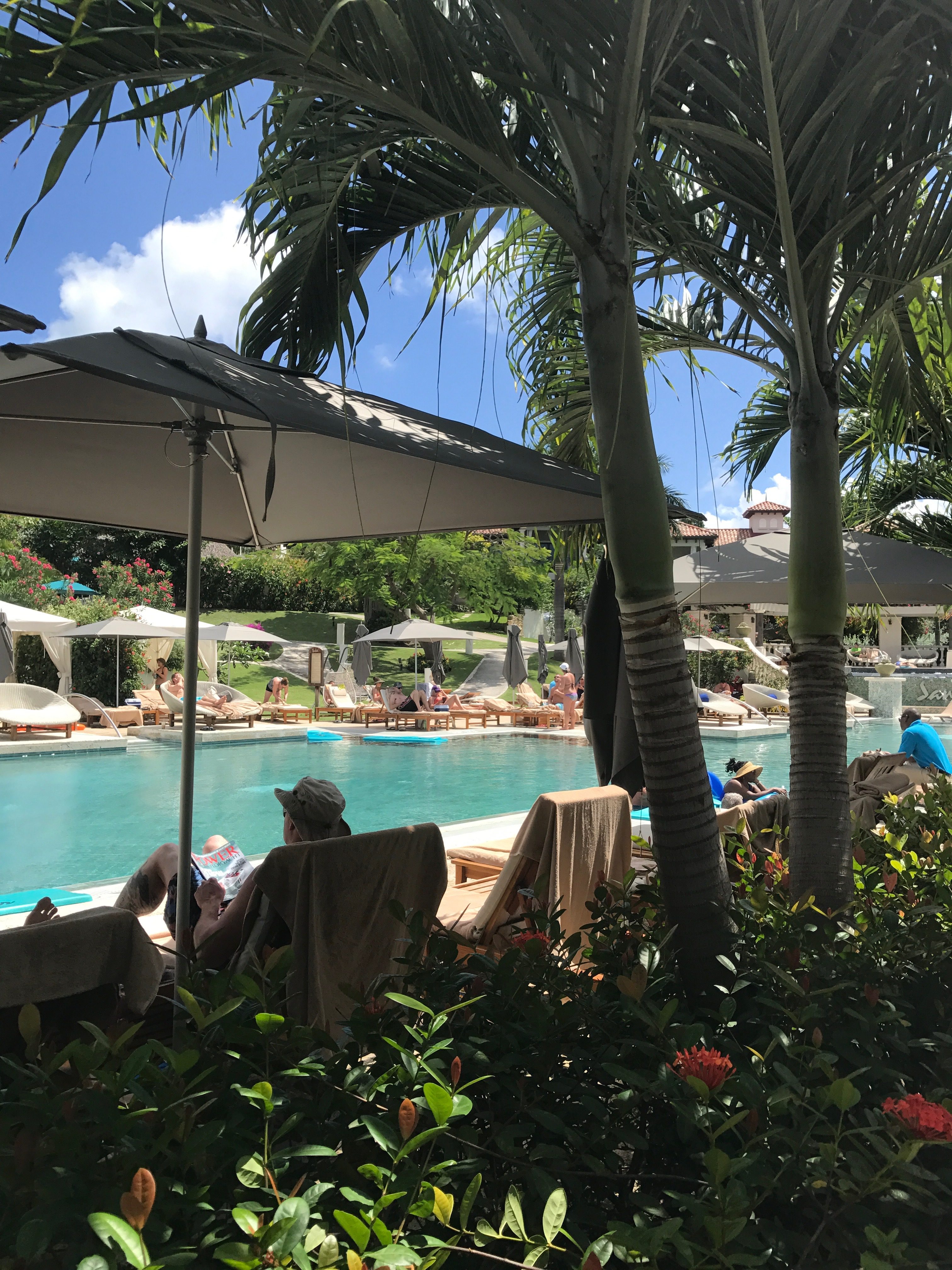 Another way we entertained ourselves was by playing 500. It was nice to get out of the sun (or rain) and practice our table talk.

The Sandals in Grenada is about 2 minutes from the airport. I think it took longer to load the van with our bags than it did to drive to the resort. Yet, airplane noise was never a problem.
“OH, OH, look at the sunset!” – Scott 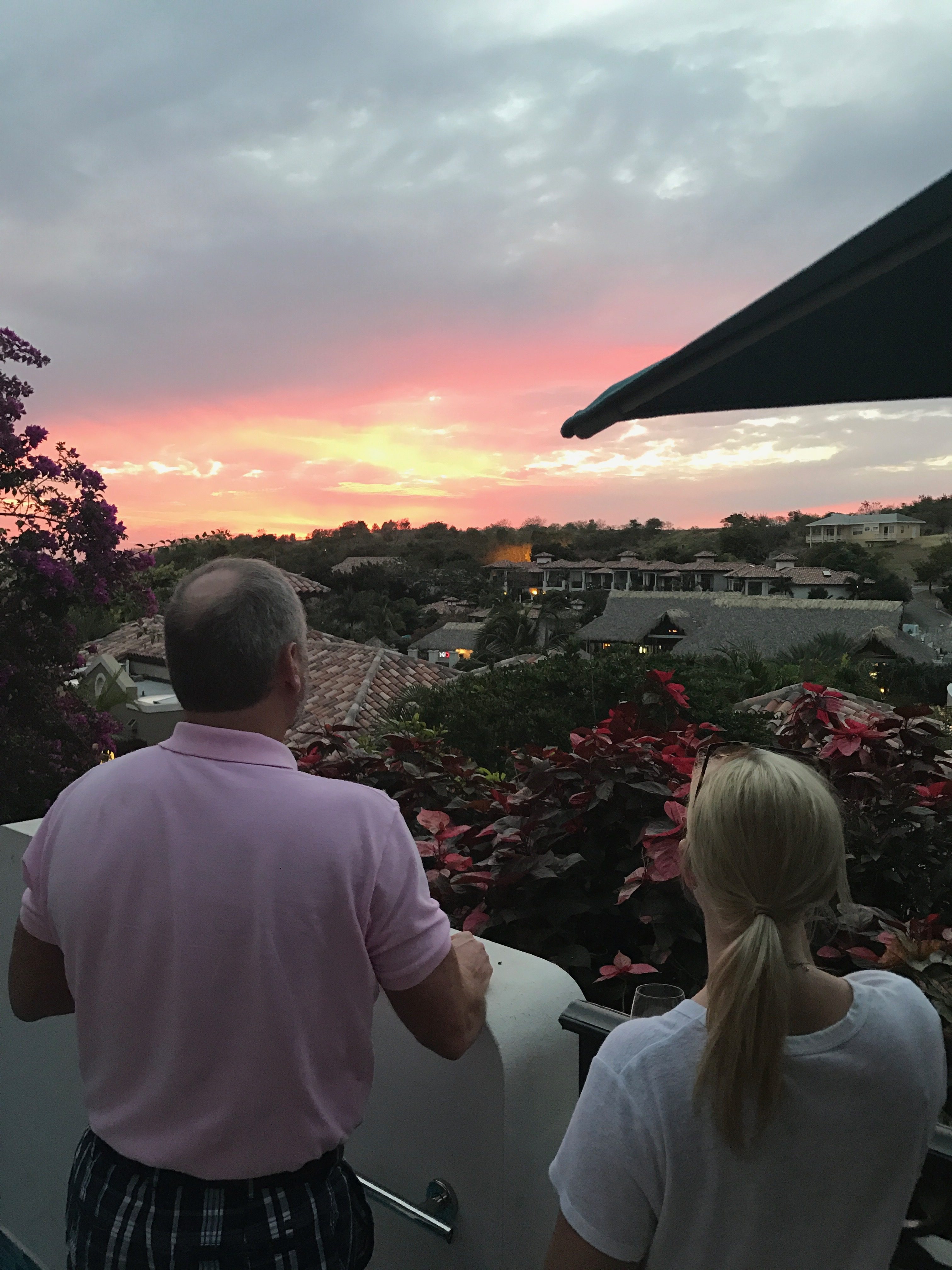 We stayed in the South Seas One Bedroom Butler Suite with Infinity Edge Pool and it was AM-MAZ-ING. All four of us hung out in the living room the first night. Housekeeping came twice a day and often left us snacks, notes, chilled champagne, etc. 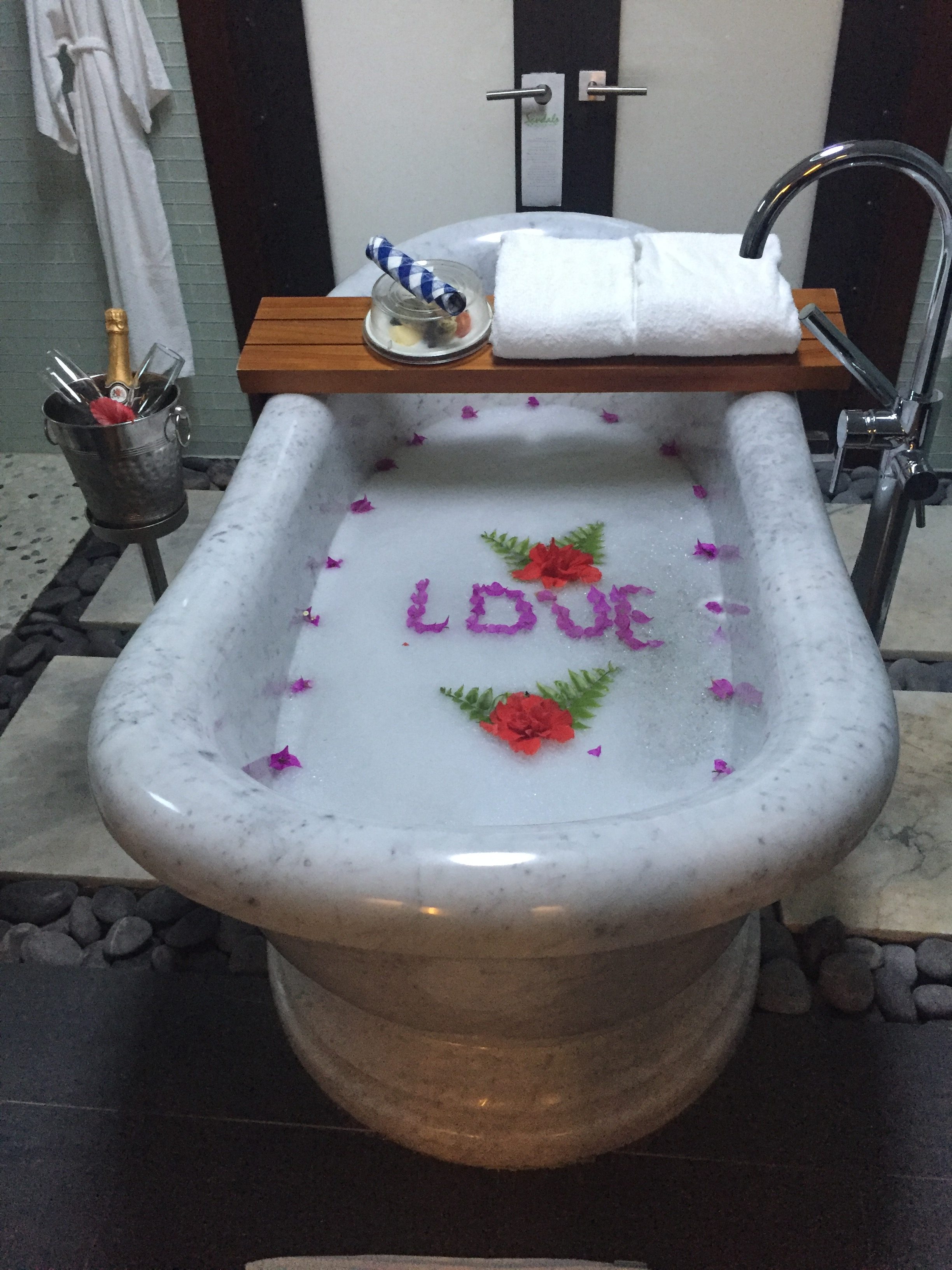 The best was a lava cake dessert the night of our anniversary. I had even skipped dessert at dinner that night because I had been eating so much. 🙂 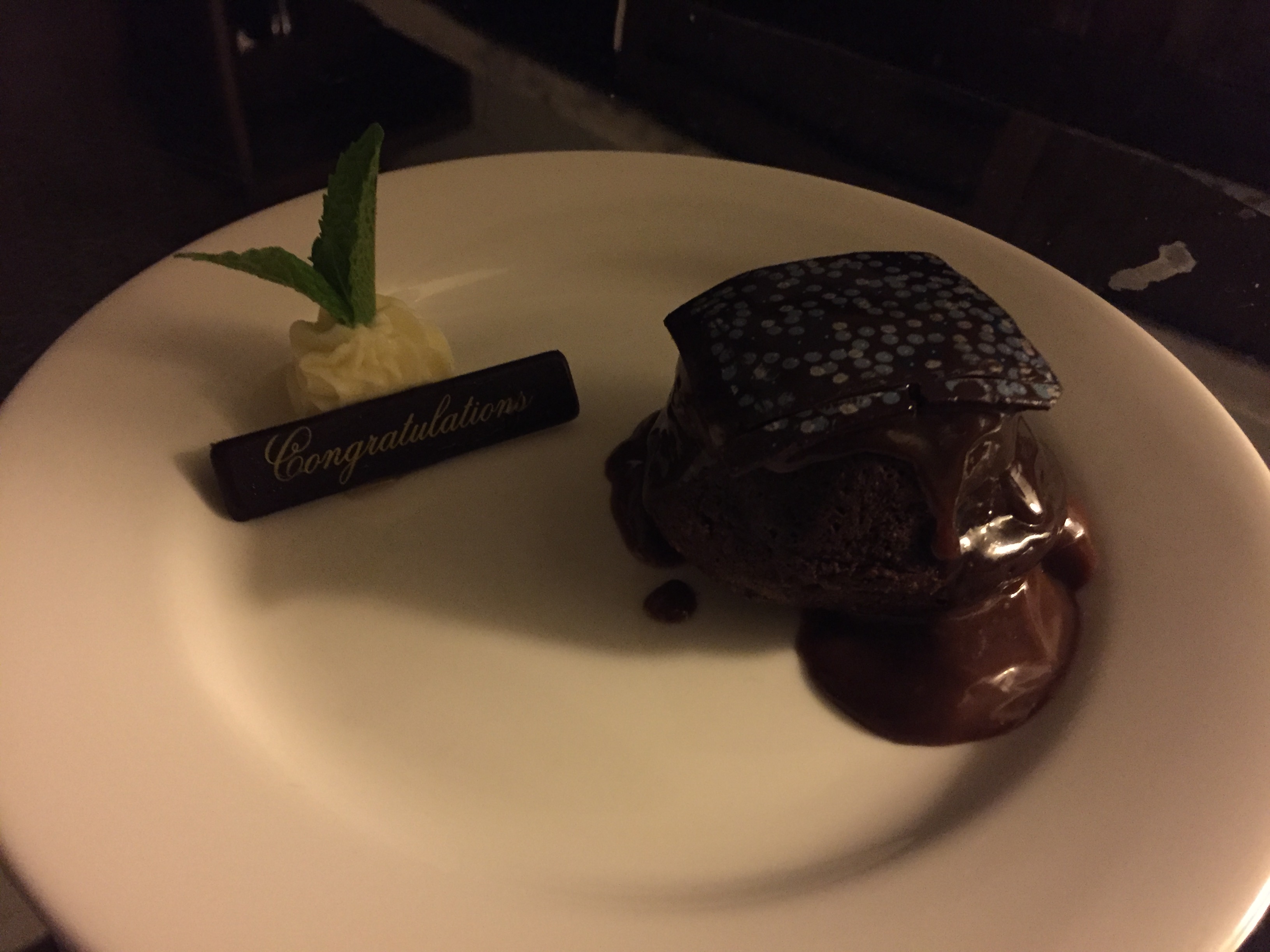 The size of Sandals in Grenada is perfect. You could easily walk everywhere but it was still spacious enough for the amount of guests. The staff, especially the entertainment crew, was super friendly and attentive. There were several restrooms around the resort that were all kept very clean. And I loved the decor! They had some of the coolest colors, tile work and light fixtures! 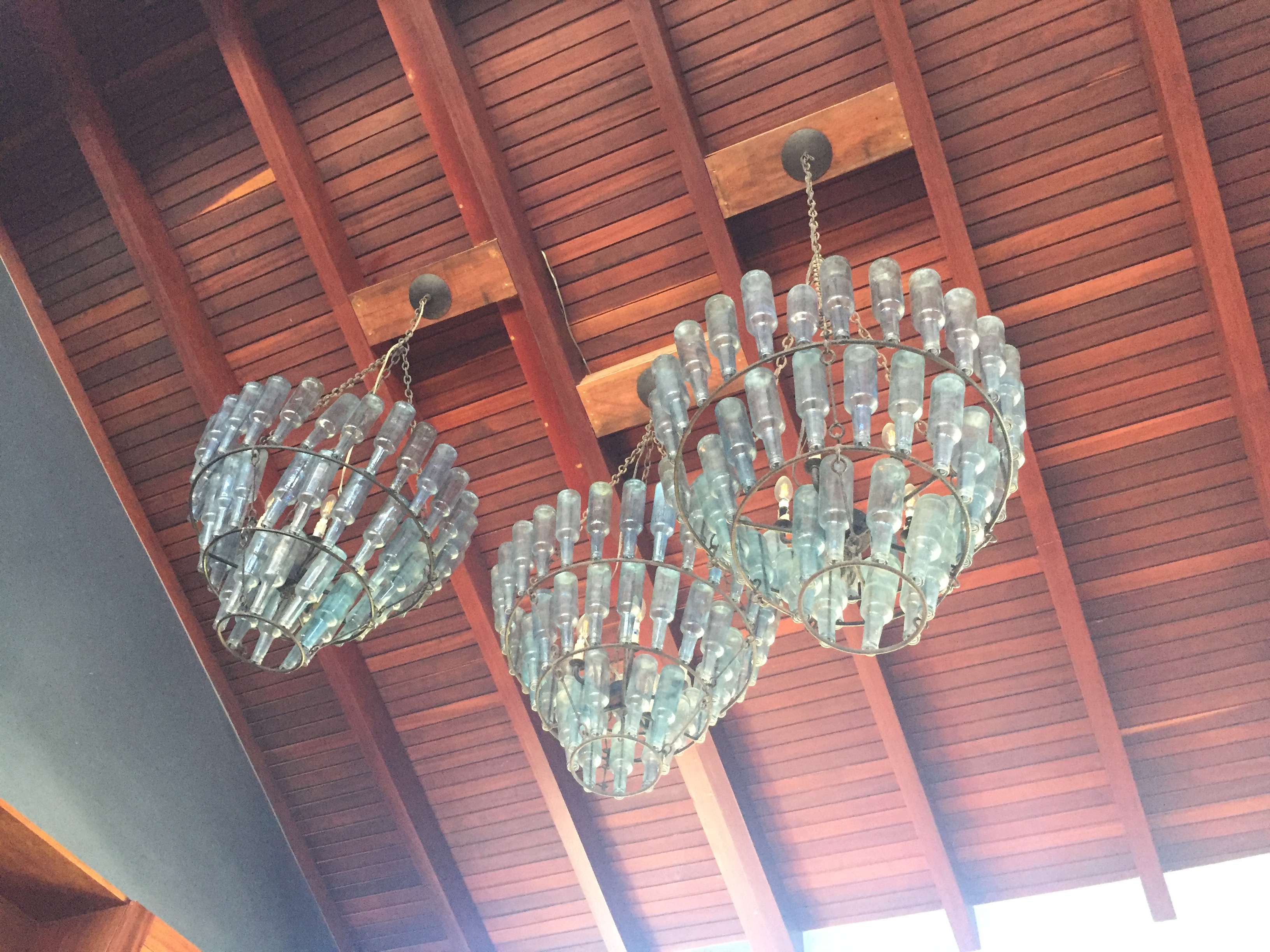 Downsides; If they can even be called that

There were a few unfortunate things that happened during the week, like the big beetle in my mom’s wine after she set it on the ground outside at night. It was so big and ugly it even grossed out the cocktail waitress, who quickly got my mom a fresh glass of wine. Another downside was a young drunk guy who was the definition of ugly pompous American- saying loudly to the bartender, “in American we make margaritas like this…” Lastly, the rain and wind. It rained almost everday but only for a few minutes. The breeze was nice, but other than the first day the wind advisory was red. So Scott was only able to use the sailboat once. 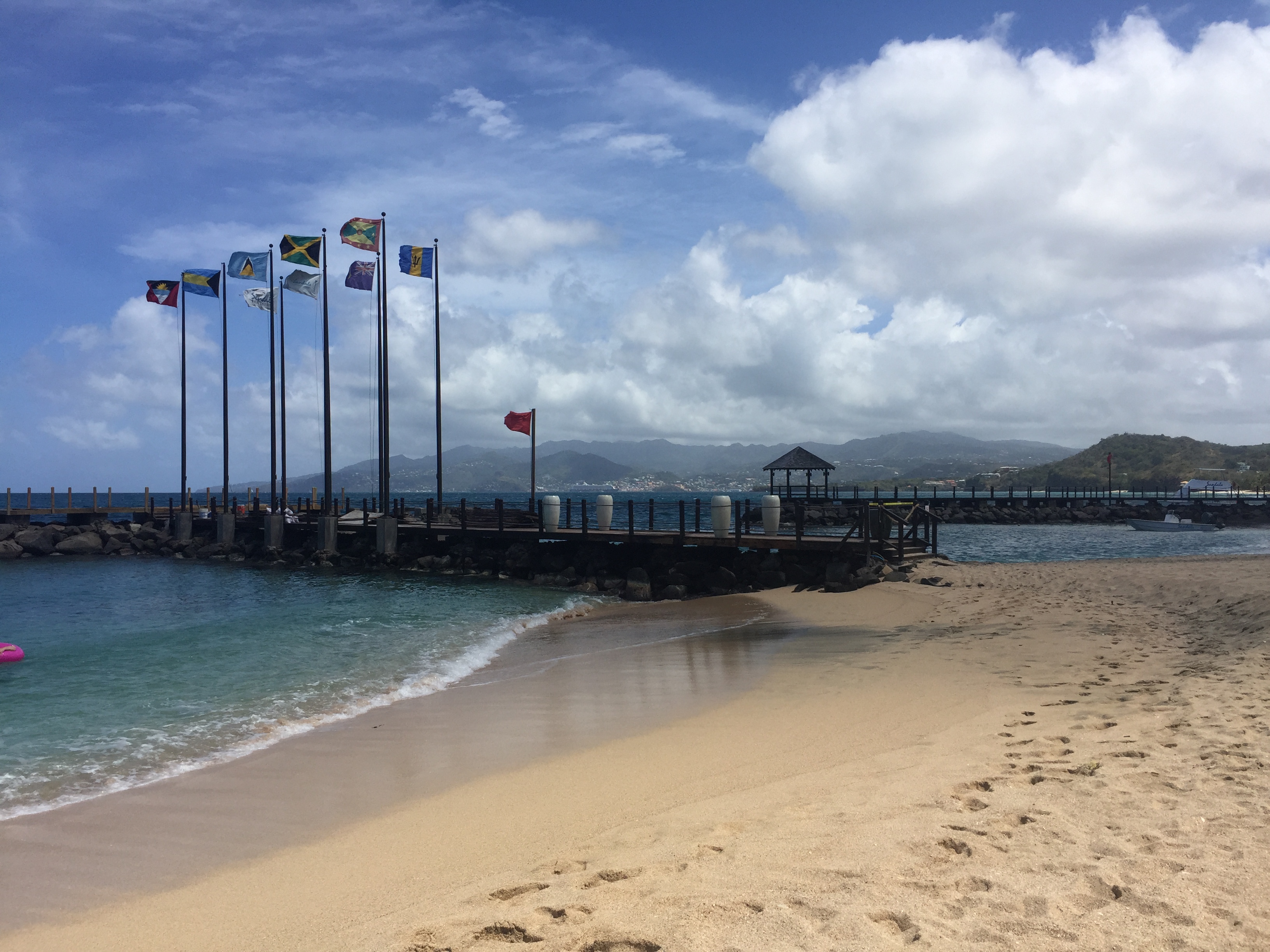 All in all the Sandals in Grenada was truly amazing. I’d go back in a heartbeat. I’m so grateful that we travel well with my mom and Scott and that we’re able to take these vacations!

2 thoughts on “A Week at Sandals in Grenada”