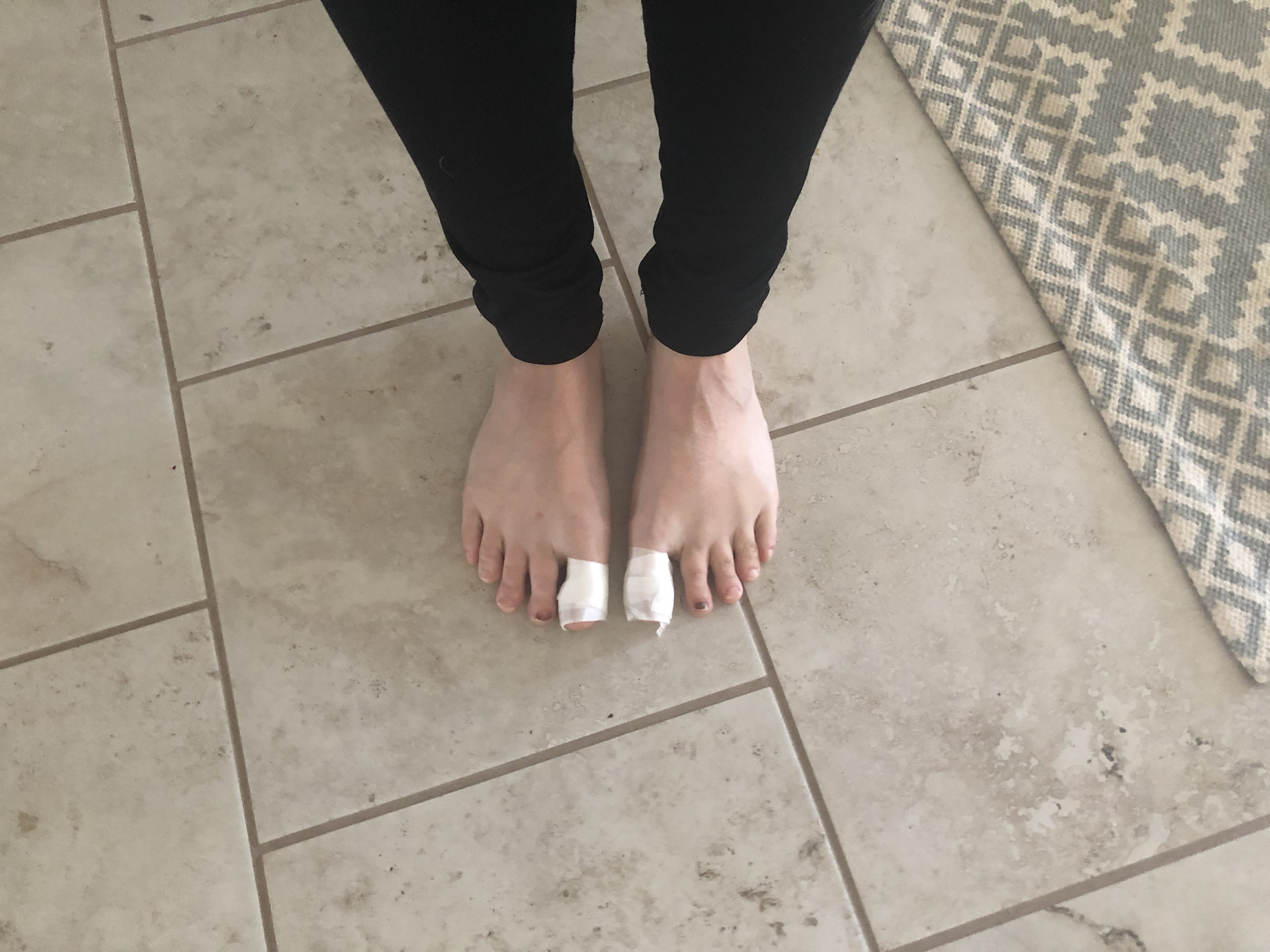 Prepare yourself for a long recap of the last three weeks of my Nashville Marathon Training and running blisters. Lucky for you though, I’m not sharing any actual pictures of my running blisters. 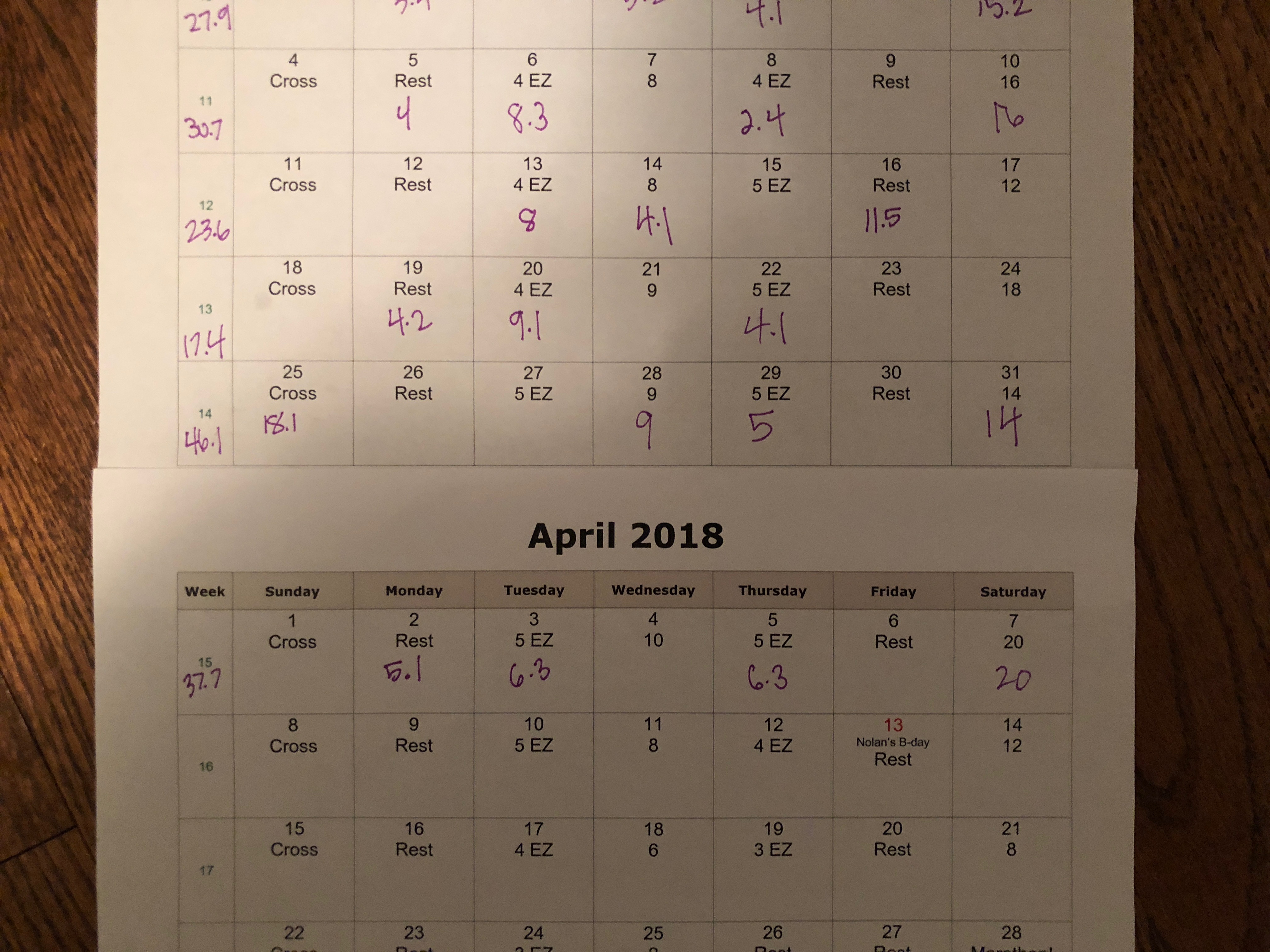 After finishing week 12 I took the executive decision to pop one of my running blisters and leave the other. Then I took two days off while our friends were in town. On Monday the popped blister was looking much better and the other one looked only slightly down. On Monday and Tuesday I taped both toes with athletic tape. They didn’t give me any problems on Monday, but during my 9 miles (on the treadmill) on Tuesday I started to feel the unpopped one at the end of the run. So Tuesday night I popped the other and treated it the same as the other one. Between taking 2 days off and soaking my running blisters in epsom salt, they started to look better. I did 4 miles on Thursday and took another two days off.

With two days off, clear weather and tapped toes I took off Sunday morning. I really tried to go slow and I did, for the first 3-4 miles, which is really how long it takes me to warm up now. I listened to the audiobook of I’ve Got This Round. It might not seem like the best audiobook to listen to while running 18 miles, but it kept me going slow and it did not require 100% of my attention. I laughed a few times, but it mostly provided much-needed distraction.

The next several miles went by a little faster and I really didn’t hit “the wall” until somewhere between 16 and 17 miles. Even then, it wasn’t that bad. It was mostly because I knew I’d have to do another neighborhood loop to get to 18 and was running low on water. I ended up going 18.1 and I was able to kick it up the last 0.1 mile. I felt good, but by the end I felt like I could eat a horse. 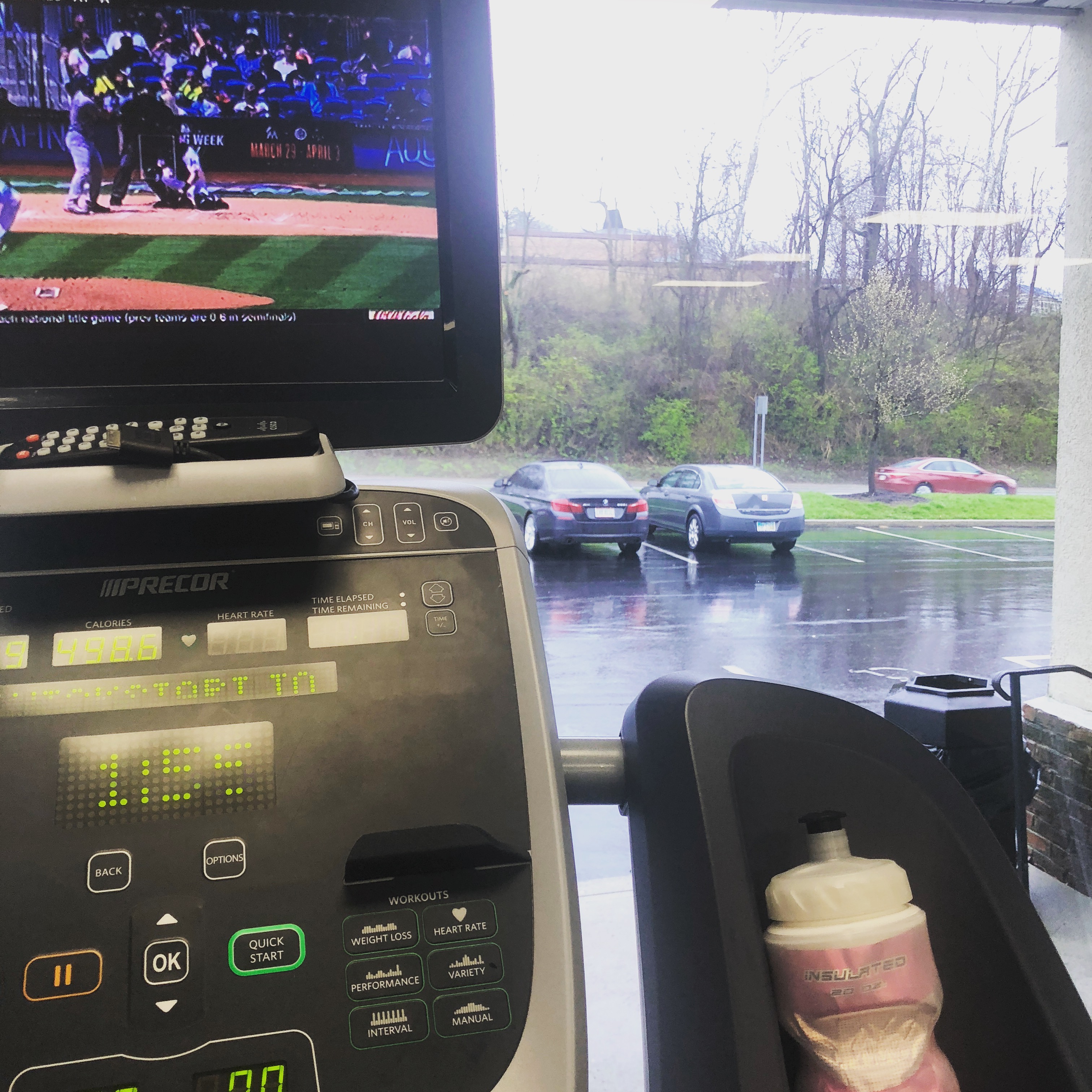 After subbing on an indoor volleyball team on Monday, I needed to take Tuesday off. I soaked my feet twice a day to dry out the blisters. My 9 and 5-mile weekday runs were on the dreaded treadmill. I passed the time by listening to a few Aaptiv workouts, listening to The Golden House audiobook and playing a few mind games. My favorite is watching cars go by and trying to think of someone I know that has that car. The only plus side to treadmill running is that it’s easy to take small sips of water and gel. Although that’s not consistent with what it’s going to be like during the marathon so maybe it’s not a plus side…

I was feeling very relaxed for Saturday’s 14 miles. A little too relaxed I think. There was only 1 challenging climb (near the end), but the whole thing seemed more challenging than the 18 miles the previous weekend. I think my brain was overly confident. The blisters are still there, but are turning into hard callouses. They don’t hurt when I’m running, but often as soon as I stop and walk they scream. I’ve also resolved to wearing wide sandals all the time. My friend so correctly pointed out that they look like they are made with duct tape.

Week 15 has the biggest scheduled mileage with the big 2-0 on the weekend. Based on the weather and my volleyball scheduled I planned to do 5 on Monday, 10 on Tuesday, 5 on Thursday and then 20 on Saturday. 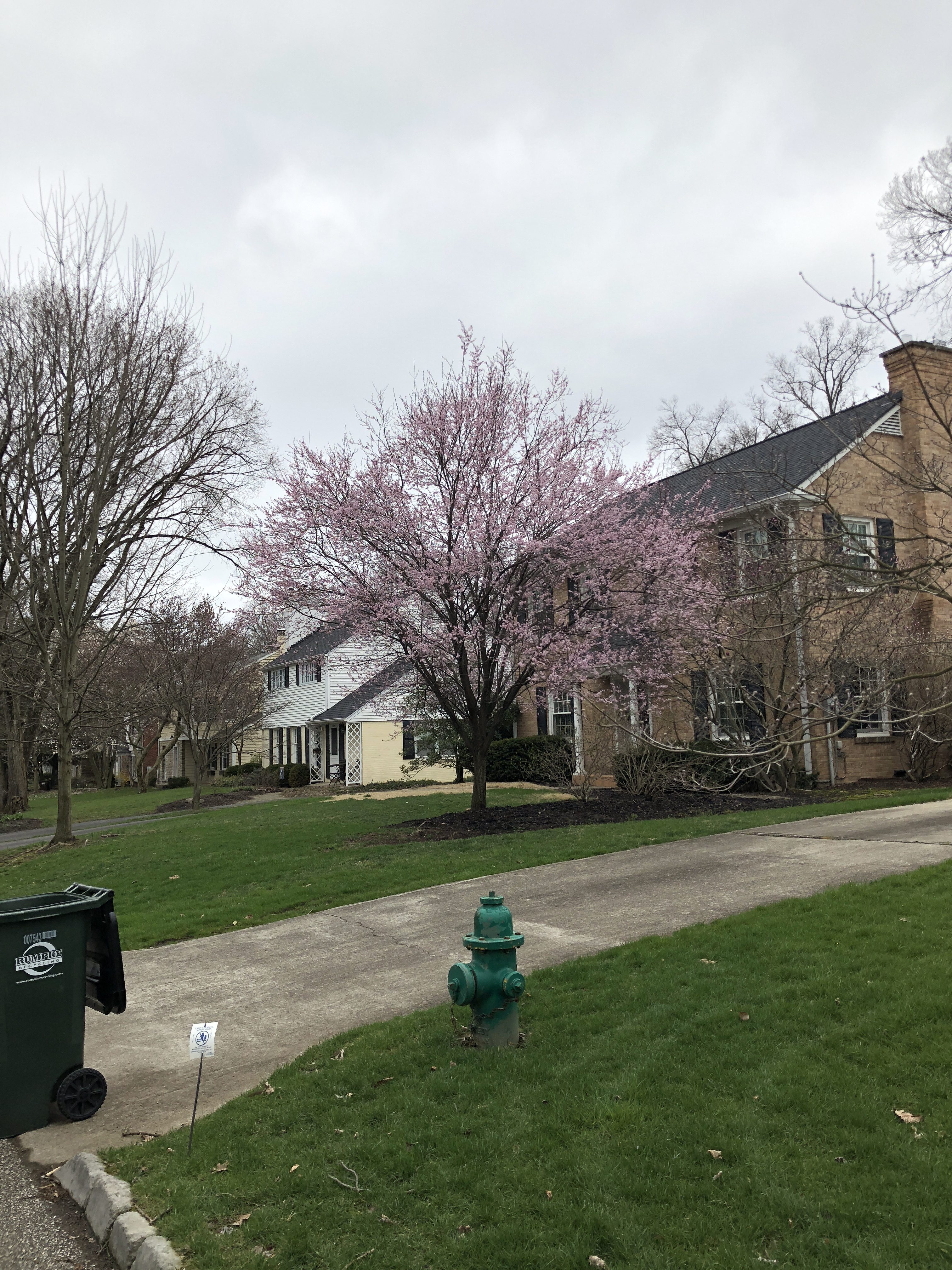 Monday was dry, cloudy, in the low 40s with minimal wind. A pretty good day for a run! Plus there were countless blooming trees to see and admire. I stopped quick to snap this picture of this big pink tree in our neighborhood. My stomach wasn’t 100%, but I blame that on the Easter fried chicken.

On Tuesday I wanted to get 10 miles, but my stomach and the rain had other plans! I managed to get 6.3 in before my stomach (and the sky) started rumbling. Then on Thursday, I had a fantastic run! The weather was great, I felt great and I held a faster than normal pace. 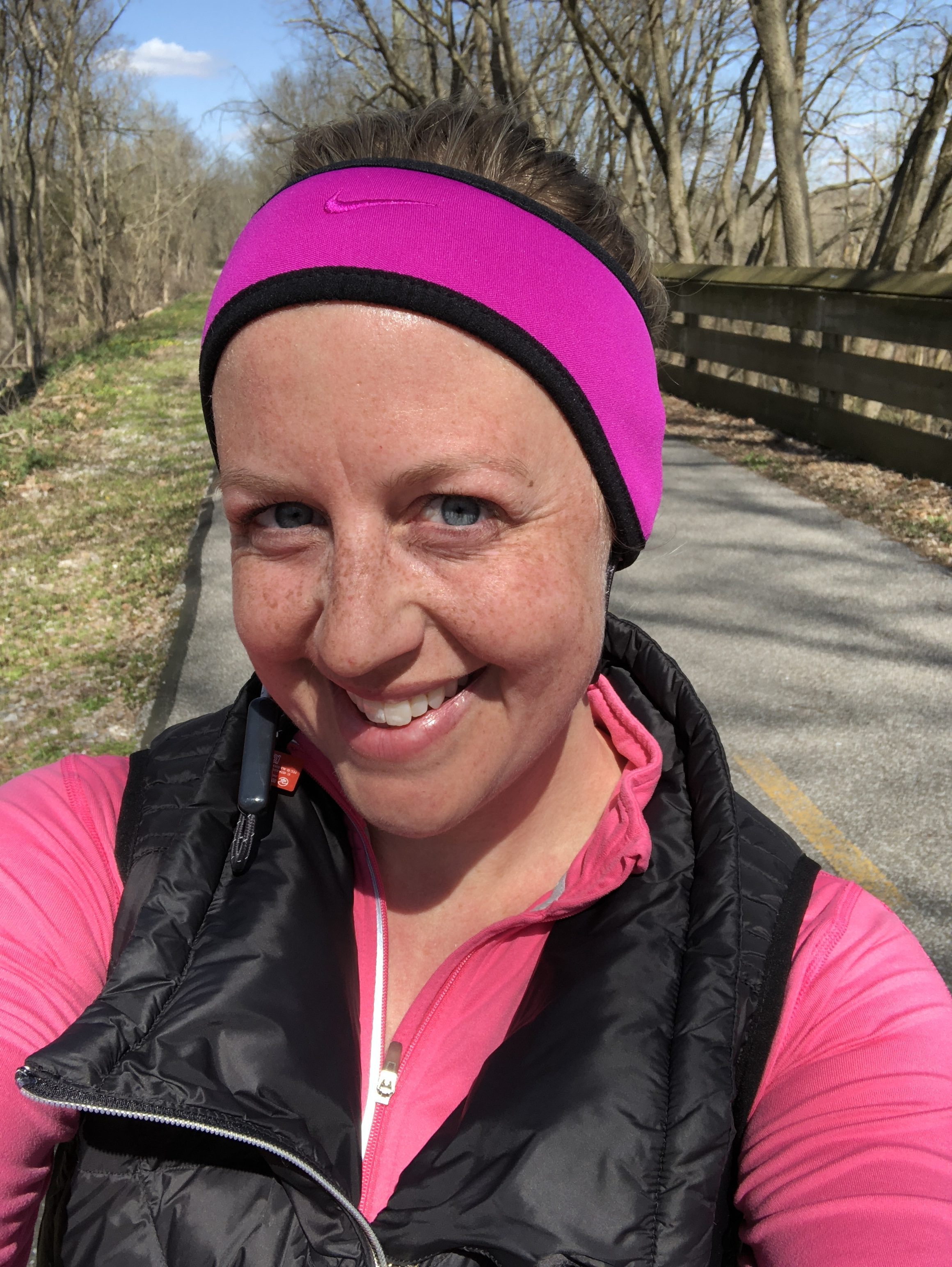 Saturday rolled around and with the a good 6-miler in, I was pumped to do 20. If you follow me on Instagram you’ve already seen my after selfie. I’m not getting much better at those. 🙂 The run itself went pretty well. Per my usual, I started too fast. And by start I mean, the first 6 miles! I kept trying to slow down, but each time my app announced the next mile I had kept up the too-fast pace. Eventually I slowed down to a more sustainable pace, but the fatigue still hit around the last few miles. I was also overdressed. The forecast said cloudy and 30-40 degrees. It turned out to be sunny and close to 50 by the time I was done. (I got a sweet headband tan line.) Using the trail markers I walked every 1/2 mile to catch my breath and regroup. Running is such a mental sport. The good news? I did it, my running blisters didn’t bother me and now my mileage starts to tapper until marathon day. 🙂