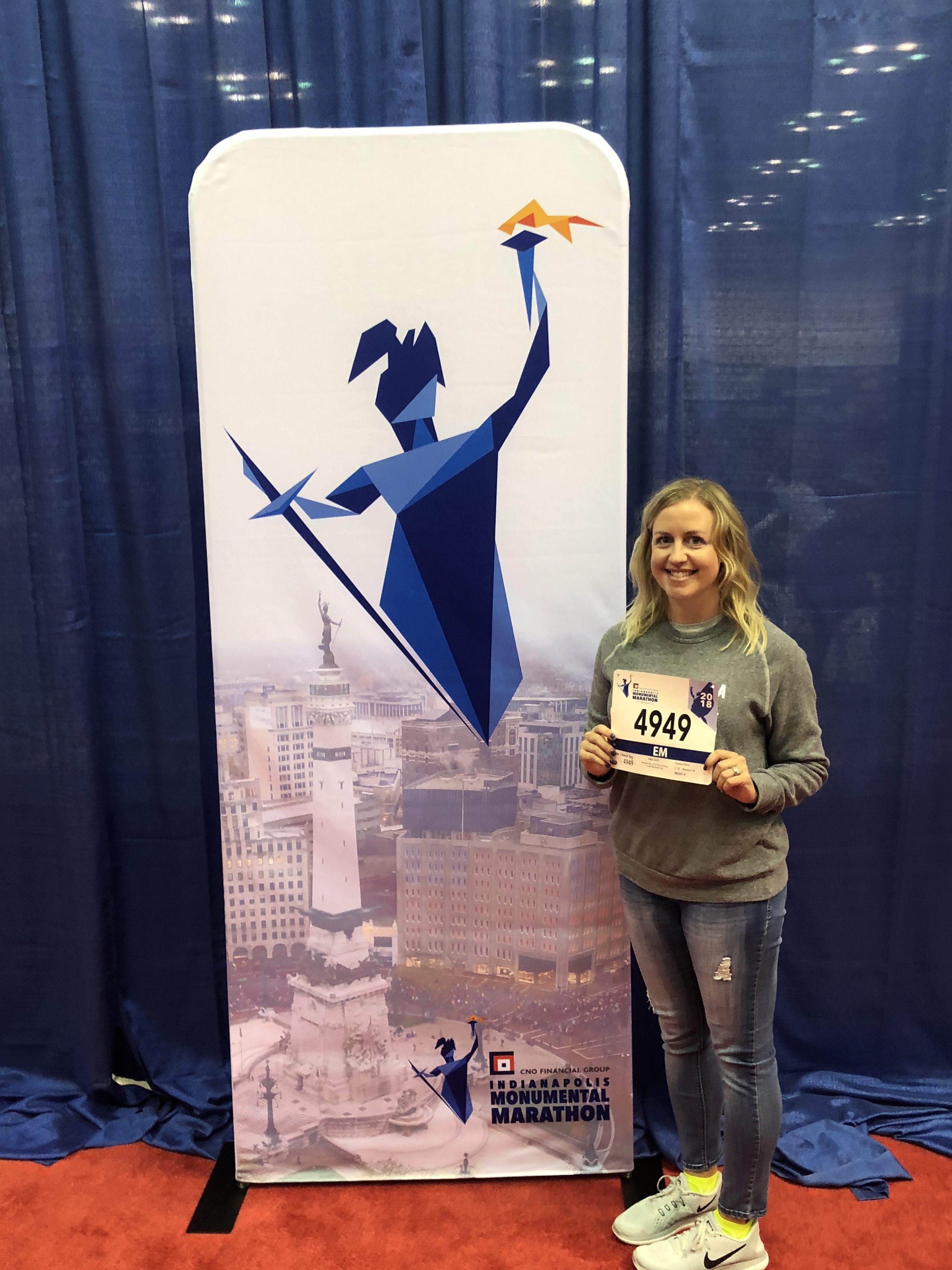 The 2018 Indianapolis Monumental Marathon was last weekend. After 18 weeks of training, including a few half marathons, and the very anxious week before, it’s all over. It’s a weird feeling- I feel so accomplished but also sort of sad that it’s over. 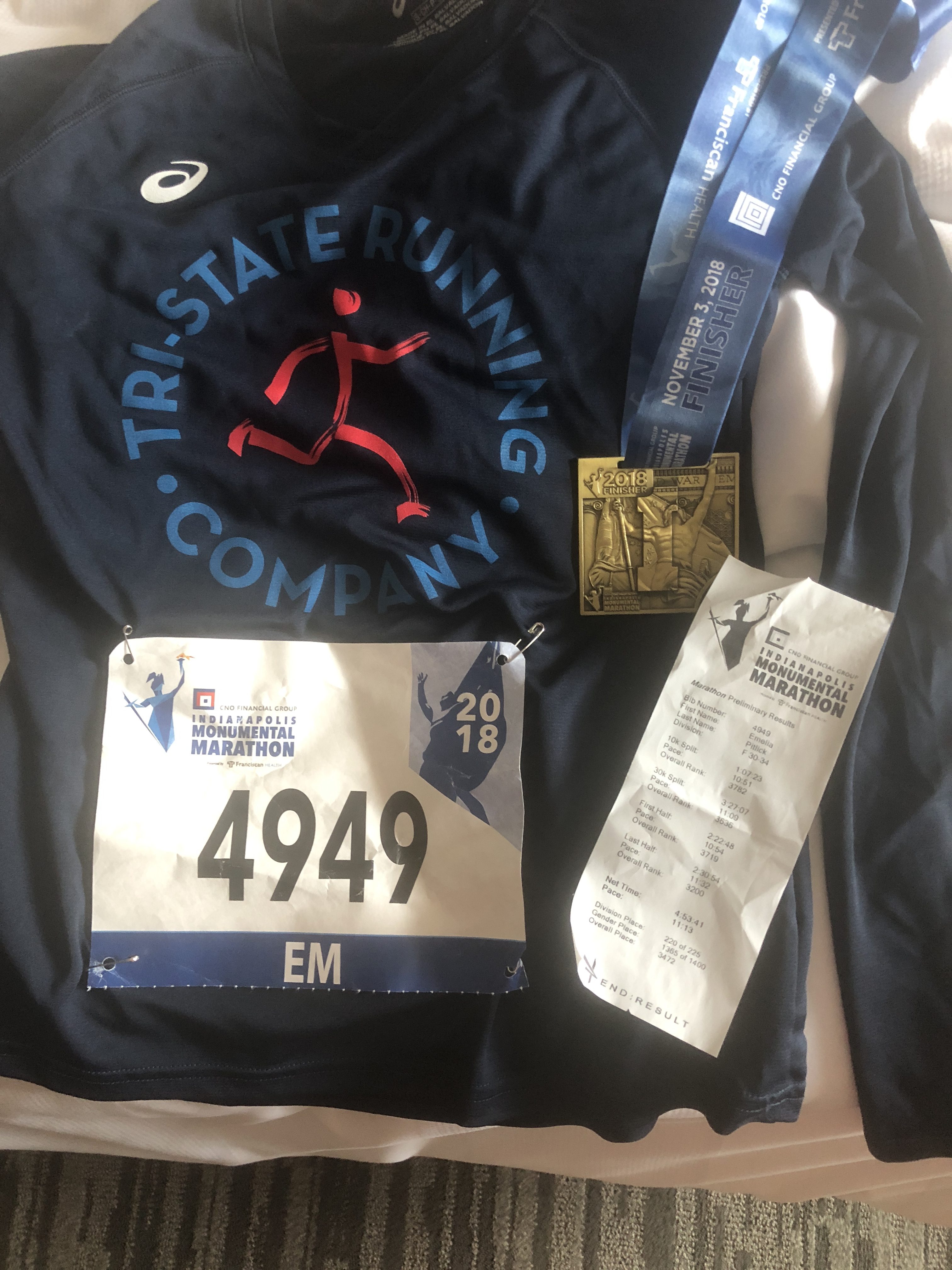 I finished the race in 4:53:51, achieving my under 5 hours goal and shaving off 51 minutes from my last marathon. We started off a little too fast, but settled into a good pace for the second half. I walked through some of the water stations and only walked 1 other time on the course. I felt really good and strong running through the last few miles.  🙂 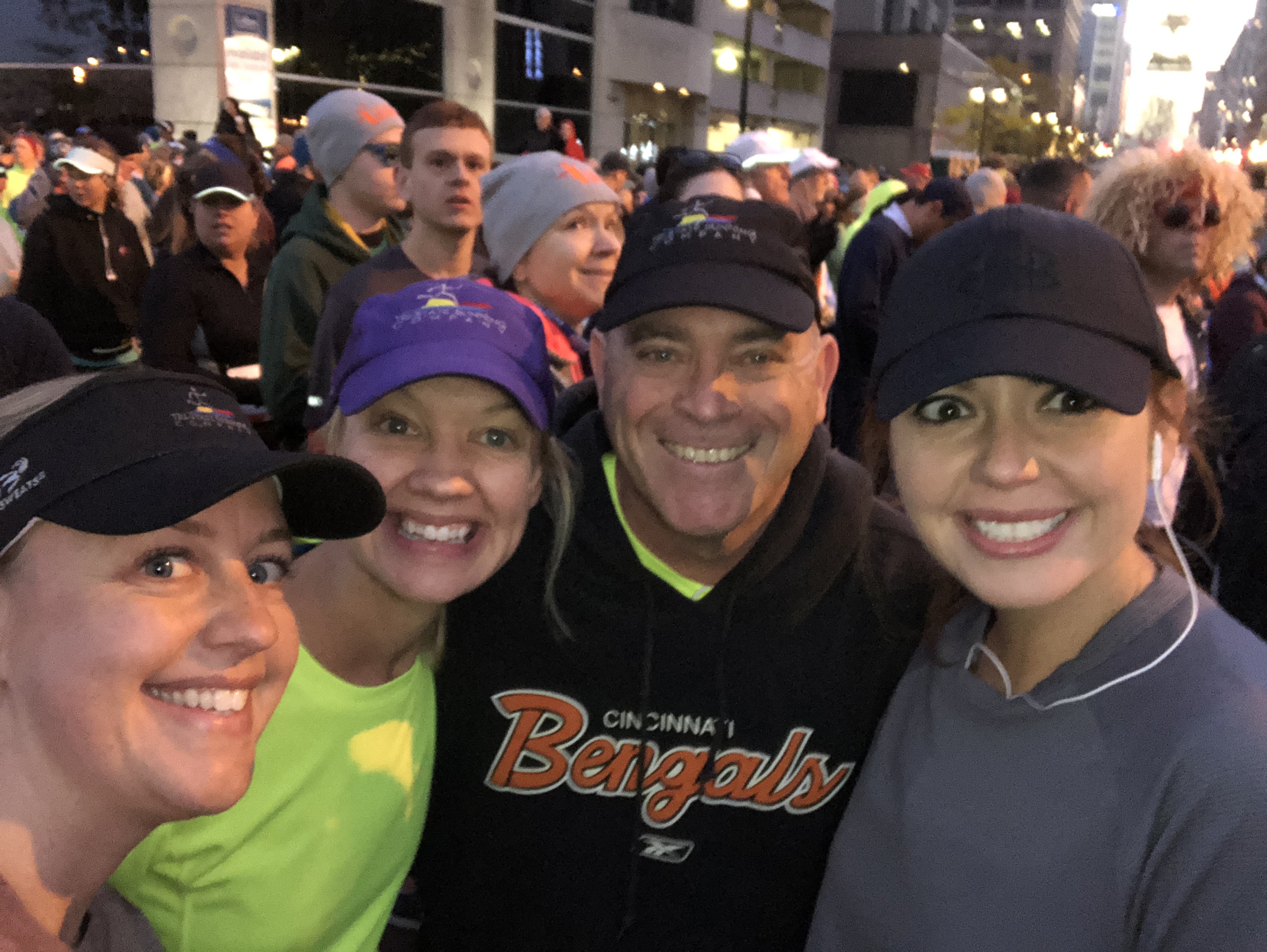 We ran the first several miles as a group, quickly shedding our throw away layer. We agreed to stay positive, smile a lot, and use the word fork whenever we felt like swearing. Then, Becca took off and Dan dropped back. For the next several miles Melanie and I stuck together. We didn’t even talk much, but just having her by my side, like at the Queen Bee Half, was encouraging. At one point she dropped back and I just yelled “Get the fork up here!” and she did. 🙂 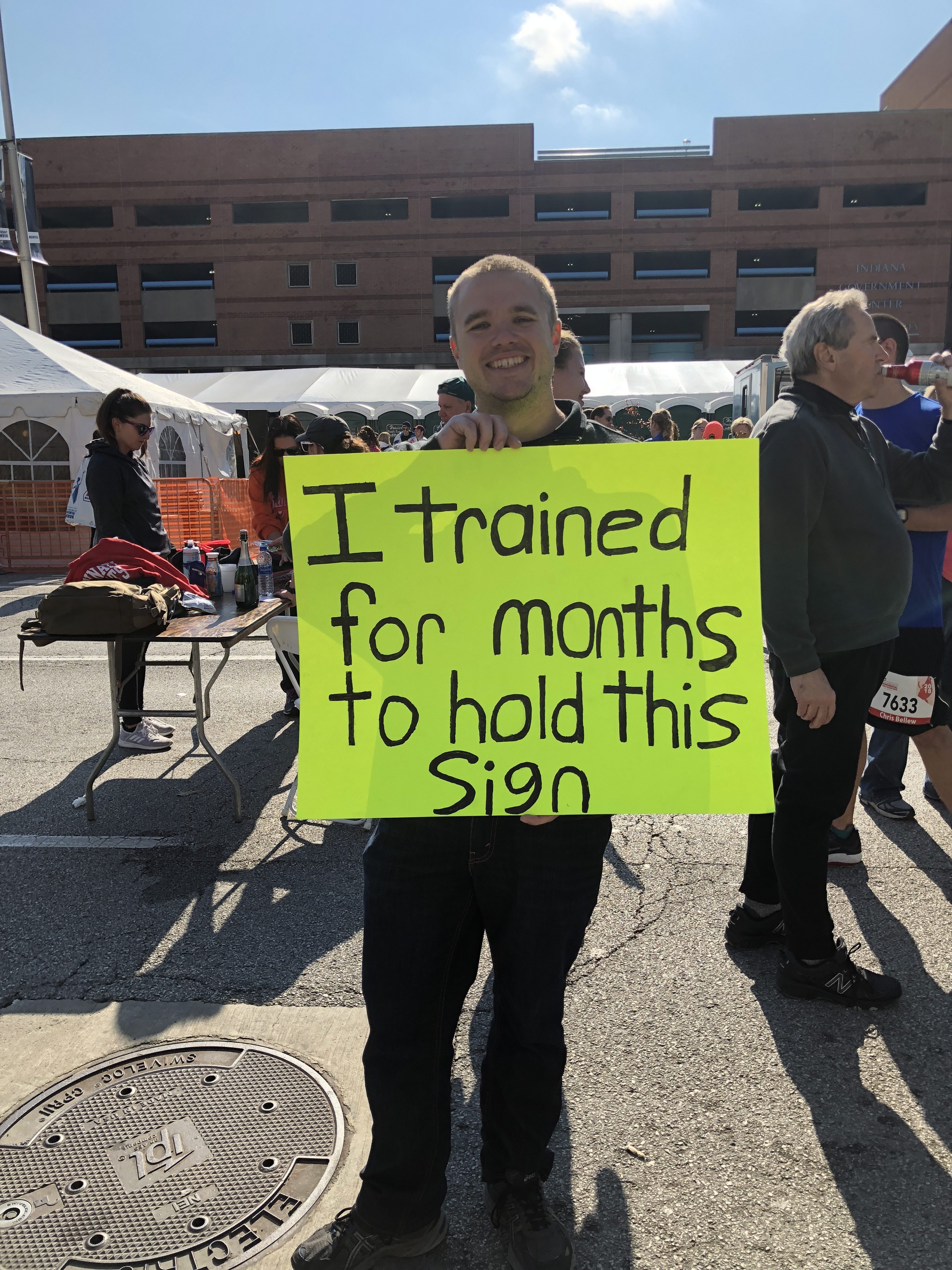 Throughout the course there were several cheerleaders, funny signs and music. The guy above was especially encouraging. I saw him several times on the course and he made me laugh and smile every time! He said things like “Yep, it’s me again! You can’t get rid of me that easily!” I saw him after I finished and thanked him. At this point he could barely talk anymore from screaming so much. A guy who loses his voice cheering for runners gets an A+ in my book.

At somewhere between 12-18 there were two other Tri-State folks that ran with us for awhile. Random cheerleaders are great, but a familiar face and someone to run with you for awhile is even better. 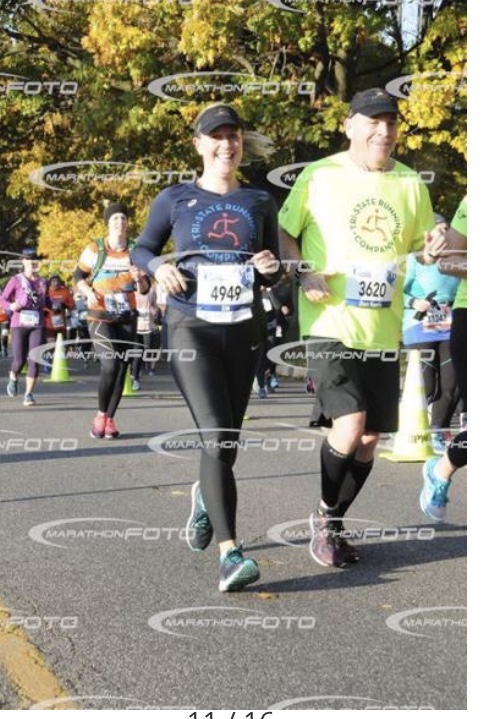 There was also a little kid in a stroller that poked his head out and said “You guys are running SO fast!” Cue the smiling. 🙂

Two other cheerleaders that stood out were two young girls early on in the race. One was screaming encouraging things like “You got this!”, “You’re doing great!”, and “Looking good runners!” After every chant the other girl would scream “YEAH!” Their excitement and energy was infectious. 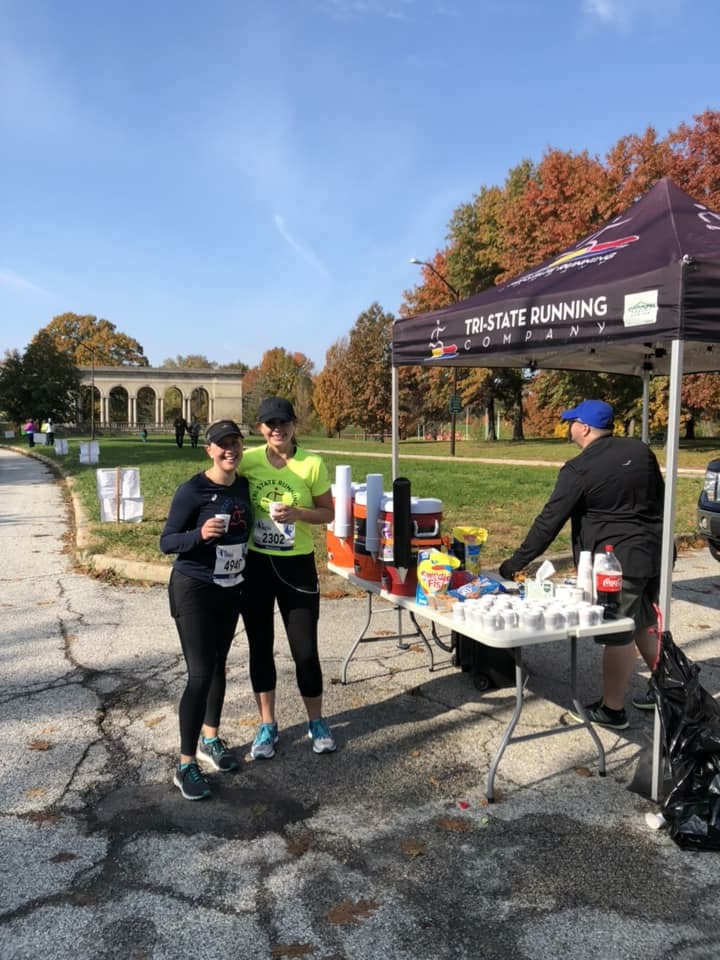 At mile 21 Tri-State had an entire tent set up with anything you might need at mile 21 of a marathon. Melanie and I stopped for a quick smiling picture and a sip of coke, which made me burn, but what else is new? 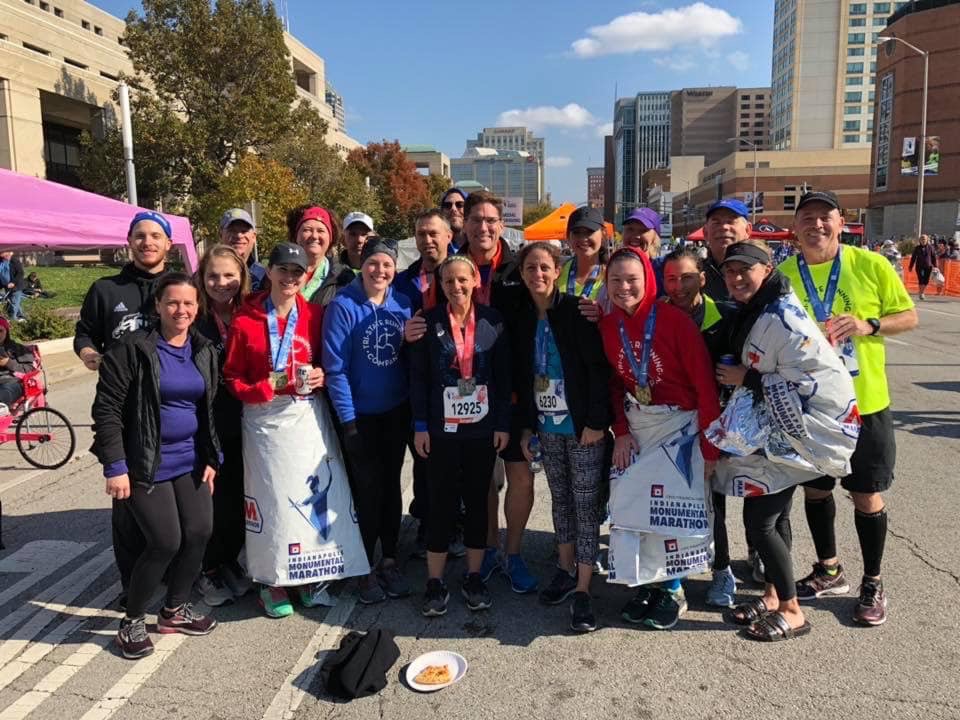 The last cheerleaders around mile 25 were my Tri-State people. This is the most supportive group! Some people had already finished and ran back to cheer others on. Emily and my coach Kim ran with me for awhile, then Kim peeled back to run Melanie in since I knew she was close behind me. Emily was perfect! I told her to just talk about anything but running. She told me all about her dog and if you know me, you know I love dog talk. It was the perfect thing to distract me from my tired legs.

What I Learned This Time

I once heard that you learn the most your first marathon and then only incrementally during the following marathons. I agree, but I still learned a few things! 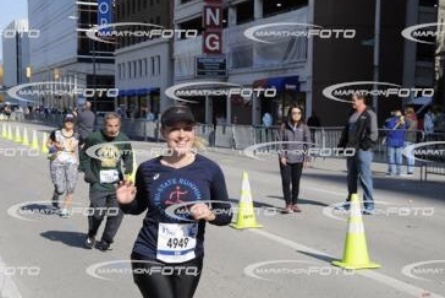 Now, it’s time to tackle my after marathon checklist, including singing up for the Flying Pig next year! 🙂